The Blessed Sacrament was reserved for the first time on 31 March 1935 in the DYA Academy at 50 Ferraz Street. Pedro Casciaro remembered that it was a very simple wooden tabernacle.

Pedro Casciaro first met Saint Josemaría in 1935, when he was studying architecture in Madrid. Right from the start, the Father, as people called him, opened up broad horizons of holiness and apostolate to him. He subsequently became a member of Opus Dei and was ordained a priest. He was a great support for St Josemaria in the early days of Opus Dei. In 1949, St Josemaria sent him to Mexico to begin the apostolic work of Opus Dei, where he remained until his death in 1995.

In the following extract, he recalls one of the occasions when Saint Josemaría encouraged him to keep our Lord company in the Tabernacle at the DYA Academy at 50 Ferraz Street, the first centre of Opus Dei. 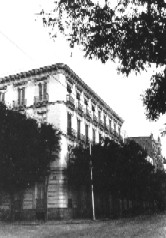 One day I went to have a chat with the Father and I found him particularly happy. Normally when we met I would do the talking first. The Father would listen very attentively until I had finished, without interrupting at all. He would ask me about my interior life, my studies, my parents, and so on. Then he would give me his advice. Not so that day. It was he who started talking, explaining how Don Leopoldo Eijo y Garay, the Bishop of Madrid, had granted the permission which they needed so as to reserve the Blessed Sacrament in the chapel of the hall of residence, the Academic Residence for Law & Architecture (Academia Residencia DYA in Spanish) at 50 Ferraz Street.

The Father had already showed me the oratory – the chapel – on my first visit with Agustin Tomas. I remember it perfectly. It was a quiet little chapel in a room off the hall which led to a spacious, peaceful patio. Reverent, simple, and pleasing, it had obviously been done with love. On the front wall above the altar, there was a painting of the disciples at Emmaus talking to the Lord. (…)

The Father, then, was joyfully telling me about the permission he had been given. I, in all truth, had very little idea of what he was talking about. I lacked the necessary Christian formation for understanding when and how the Blessed Sacrament could be reserved in a sacred place. (…)

You help me to keep him company

With tremendous patience the Father resolved all my rudimentary questions. He spoke at length about the Eucharist in words which revealed his deep and sincere devotion to Jesus in the Blessed Sacrament. “Our Lord must never feel lonely or forgotten here, even if he sometimes is in some churches,” he said warmly. “Here, in this house, where so many students live and so many young people come, he will be happy in the midst of all our devotion. You help me to keep him company.”

I was moved by his ardent love for the Eucharist. Since I passed fairly near the hall of residence on my way to the School of Architecture, I decided enthusiastically to pop into the oratory as often as I could, to pray for a while in front of the tabernacle, as the Father encouraged us to do.

It must have been then that he dictated to me the words of the spiritual communion: “I wish, Lord, to receive you with the purity, humility and devotion with which your most holy Mother received you, with the spirit and fervour of the saints.” 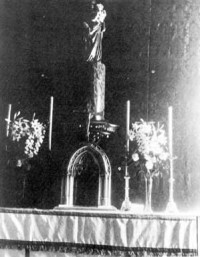 Soon afterwards, on 31 March 1935, the Father was able to celebrate his first Mass in the chapel and the Blessed Sacrament was reserved in the tabernacle in a Centre of Opus Dei for the first time. It was a very simple wooden tabernacle which some nuns had lent the Father. Mingled with his joy, he felt an acute sorrow at not being able to dedicate a more dignified tabernacle and sacred vessels to the Lord, because he always wanted to offer God “a sacrifice like Abel’s,” using only the best for divine worship.

Years later he stated: “The altar and the tabernacle ought to be good, if at all possible. At first we could not manage that. The first monstrance was made of iron, painted over in silver paint: only the centre piece for the Host was silver-plated. The first tabernacle was made of wood… an Atonement nun, whom I loved very much, lent it to me. How upset I was to be offering such a poor thing to our Lord!”

An excerpt from Dream and Your Dreams Will Fall Short, Pedro Casciaro, Scepter, 1997, pp.26-9.