“On that 14th February 1930, our Lord made me feel what a father feels when God sends him another child unexpectedly…”

From October 2, 1928, when St Josemaría clearly “saw” the mission God was entrusting to him, his life had only one meaning: to fulfill God’s Will. He became the faithful instrument for opening up the way to holiness that God had showed him in the middle of the world: a path of holiness for ordinary Christians, through their work. “The divine pathways of the earth have opened up,” he explained, “Truly Christians. Leaven in the dough. Our task is to do ordinary things, with naturalness. The means: daily work. All are to be saints!” 14th February 1930: God wanted there to be women in Opus Dei

At first he thought this path was for men only. There will never be women in Opus Dei. No fear! he had written at the beginning of February 1930. But on February 14, while he was celebrating Mass, he discovered another defining aspect of God’s Will. Contrary to what he had thought, God wanted there to be women in Opus Dei.

It was as though the light that he had received less than a year and a half before on the 2nd October 1928 had been so powerful, so blinding, that he had not been able to see every part of what God wanted. Now that his eyes had become accustomed to the light, God was showing him some aspects that he had never dreamed of.

“On that 14th February 1930, our Lord made me feel what a father feels when God sends him another child unexpectedly. And ever since then I feel obliged to love you more,” he told his daughters in Opus Dei. “I look at you as a mother looks at her youngest child.” 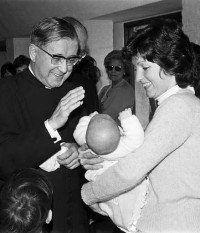 This gradual realization is typically divine: God normally lets us know what his Will is little by little, wrapped often in darkness, so that we can practice the virtue of faith. First he shows us one aspect of what he wants, and then another, and later still, another. This shows God’s wisdom and his patience in teaching us. The Founder of Opus Dei said, “If, in 1928, I’d known what was awaiting me, I would have died. But God our Lord treated me like a child. He didn’t hand me the full weight all at once, but led me on little by little…” 14th February 1943: The Priestly Society of the Holy Cross

God had sown in St Josemaría’s soul a deep apostolic zeal for priests. At the same time, there was a pressing apostolic need, because the more his apostolate grew, the more clearly he saw that it needed priests who were formed in the spirit of Opus Dei and who could dedicate themselves to it completely.

Following a plan of studies approved by the Bishop of Madrid, three members of Opus Dei had been preparing intensively for the priesthood prior to February 1943, although St Josemaría did not yet know when or by what title they could be ordained. He kept praying and asking the Holy Spirit for light, so that a solution could be found that unites the essentially secular character of Opus Dei with the priestly ordination of those who were needed for the service of a universal apostolate. The problem was finding the most appropriate canonical formula.

That situation of uncertainty was also resolved “in God’s own style”. “After I had looked for the canonical answer and failed to find it,” wrote the Founder of Opus Dei, “our Lord chose to give it to me, precisely and clearly.” On the morning of February 14, 1943, while he was celebrating Mass in an Opus Dei women’s center in Madrid, a light shone in his mind. “And when I finished celebrating,” he recalled, “I drew the seal of the Work, the Cross of Christ embracing the world, set in the heart of the world; and I could talk about the Priestly Society of the Holy Cross.”

Once again God had shown him the way. That was the solution he had sought for so long without finding it: the Priestly Society of the Holy Cross. It was a solution that responded fully to the light he had received on October 2, 1928, when he had seen Opus Dei with lay-people and priests working in close cooperation.