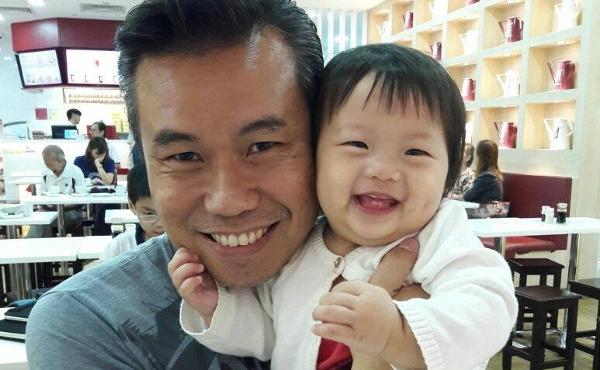 Thomas Tan and his latest bundle of joy

Whether you’re designing a bridge, making a movie, or unlocking the secrets of the universe, the ability to dream big is crucial to innovation and success.

Growing up, my imagination was my best friend. It kept me company through the awkward years of budding adolescence, when finding your place in the real world was akin to a knightly quest for something as elusive as the Holy Grail.

I read everything from Enid Blyton to The Brothers Grimm, from Jules Verne to Edgar Rice Burroughs, and lived my swashbuckling days exploring a thousand worlds replete with all kinds of magical creatures and voyages. In time, those classic worlds of adventure gave way to the muscled exploits of comic book heroes and explosive space battles on film.

At one point, my mom was worried that her young son might be doomed to mediocrity because he was spending too much time obsessing about Star Wars, reading comics, and building a fleet of X-wings out of cardboard and plastic cups.

How could she have known then that my penchant for fantasy and pop-culture would one day lead me to a career as a storyteller and Creative Director for various TV networks?

Growing up, I may have learned my catechism prayers from Sister Enrica, but it was really Captain America who taught me all about justice, truth, and nobility. Even so, I thought Sister’s white habit with her traditional veil was every bit as cool as the star-spangled duds worn by our shield-throwing hero.

Something about religious outfits and the costumes of superheroes excited my imagination and made me want to look up into the sky, whether it was to raise my eyes to heaven or to see if a man could fly. And given that members of some religious orders wore capes, a kid like myself was tempted to look out for both.

As I got older and grew in my love for the Church, I began to explore the rumored realms of Catholic fiction I had heard about. To my dismay, I found there were very few modern works of Catholic fantasy to begin with, at least not of the pulp fiction variety. And among those available, the average novel seemed rather sterile and dense. Instead of having the power to ignite your faith while inducing flights of childhood glee, they mostly left you feeling somewhat somber or guilty for not having read more theology.

I sometimes think that the Church’s evangelization targets the head too much and leaves out the imagination. And given that people who graduate from grade-school catechism to study theology are a minority, this is curiously misplaced.

On the other hand, the number of people who enjoy pulp fiction and popular entertainment grow larger by the day. Apart from contributing to the massive revenues driving the movie, gaming, and merchandising industries, these folks are influencing society by how they live and consume entertainment today.

More than ever, there’s an urgent need for Christians to use the language of popular culture to preach Christ crucified and risen to a world that’s becoming increasingly deaf to the Good News.

For a fantasy and sci-fi fan like myself, that means adjusting how we tell our faith stories to reach the hearts and minds of modern audiences.

After all, who doesn’t enjoy a good story? We learn best when our imaginations come alive, or when the learning itself is fun and entertaining.

Our Lord often used parables to convey lessons about the Kingdom of God. And what are parables if not stories that connect with popular imagination, using images and symbols from contemporary culture to transmit grace and understanding, to awaken consciences.

Today, great stories continue to thrive. Except now, the characters and values they transmit are immortalized in big-budget movies, digital games and graphic novels. Then as now, popular culture influences behavior - particularly among the young - because it’s fun, it’s entertaining, it’s easy to share and talk about. And it doesn’t require any real form of discipline or hard work to understand the content, even when the message itself is serious and controversial.

Back in the 60s, some comics producers broke tradition with DC when they began tackling grown-up topics like drugs, scandals, and the Civil Rights Movement. Suddenly, the superheroes every kid adored were putting their moral muscles behind social and cultural issues of the time. And the readership began to change. The more edgy and controversial the content, the older and more sophisticated the audiences became, even though the core readership was still made up of young people.

Pop-culture (as a genre) became a reflection of what was going on in society. And people tired of listening to parents, pastors and politicians, started reading, assimilating, and absorbing what they saw and read in popular entertainment.

In our own day, some media giants have moved on to support transgender ideologies by raising the call for greater sexual diversity among its heroes and characters, with another company closing the gap in recent years by making one of its characters a mighty proponent of gay ‘marriage’. If anything, the voice of liberalism has only grown louder in popular culture, where theater, art, music, and movies all exert increasing influence on young hearts and minds.

But where is the voice of Christ in these parts, given there are far more people who are eager to consume pulp fiction than to listen to a homily or study apologetics?

Despite the overwhelming consumption of popular culture throughout the world, Jesus is barely present to this audience, except very often in contemptuous ways.

We need to be ingenious in sanctifying the language of the world to reach audiences accustomed to dismissing the Christian faith. We need workers to till this colorful, exceptional, youthful vineyard, so that it too may bear fruit for the Lord.

In short, we need to drop our Christian prejudices, if any, about pop-culture.

According to G.K. Chesterton, “This should be our great comfort. The vast mass of humanity, with their vast mass of idle books and idle words, have never doubted and never will doubt that courage is splendid, that fidelity is noble, that distressed ladies should be rescued, and vanquished enemies spared.”

Therefore, I decided to have a go at creating a bold new genre of Catholic fiction.

I think Pope Francis was prophetic in calling on Christians to go out into the streets and peripheries to bring the message of Christ to the world. He has reminded shepherds repeatedly that they should not to be afraid to smell like the sheep.

For this reason, Christian writers and publishers ought to break free of the temptation to only write and publish within the safe ghettos of our literary traditions, for we often end up writing for ourselves and preaching to the converted. Rather than deride what we judge as the vulgar language of popular culture today, we should redeem it to proclaim the Risen Christ.

At the least, we should try and bridge the wide divide between sacred tradition and the insanely cool world of pulp fiction, to evangelize the imagination of those who care nothing for God, but who need Him all the same.

Nor can we afford to be snobbish when it comes to recognizing new mission lands and opportunities. We can’t thumb our noses at the growing throngs at Comic-Con, pop concerts, and gaming conventions. These are the new battlegrounds where the culture war is fought.

And if powers hostile to the gospel know that the way to victory is through deforming the hearts and minds of our young, we who are baptized in Christ must be prepared to form and protect the conscience of the future.

After all, it’s what superheroes do. We fight the good fight, we run the race, and we keep the faith. For if we stop believing in heroes, the heroes inside us die.