Skip to Main Content
About Opus DeiOpus Dei in Singapore

A Rendezvous with Pope Francis in Thailand

Pope Francis visited Thailand in November 2019 on the occasion of the 350th anniversary of the Apostolic Vicariate of Siam (old name of Thailand). 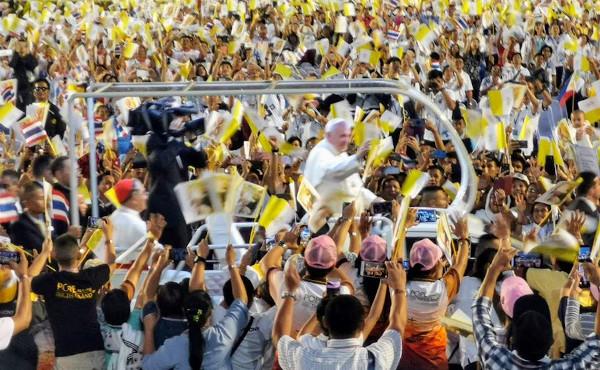 WHEN we first got the news that the Pope would travel to Thailand on the occasion of the 350th anniversary of the Apostolic Vicariate of Siam (old name of Thailand), we quickly made plans to go to the capital Bangkok to have a rendezvous with Pope Francis.

We learned that Catholics make up only 0.5% of the Thai population. Nonetheless, the Catholic Church is highly regarded in the country, thanks to her excellent schools and hospitals. The Thai Catholics were overjoyed and proud that ‘the Papa’ was visiting their country. Choirs, singers and dancers trained and rehearsed different performances for the Pope. Bangkok was decorated with banners and Vatican flags welcoming Pope Francis. When the Pope arrived, throngs of people followed his entourage everywhere even just to get a glimpse of the Holy Father.

The Pope spent four days in Thailand meeting the Royal family, the Prime Minister and the Supreme Patriarch of the Buddhists. He also met the staff of the Catholic Hospital of St Louis, and the priests and religious in the country.

The Pope had been looking forward to this trip.He took note of the fact that it is “a multi-ethnic and diverse nation… well known for the importance given to building harmony and peaceful co-existence between its numerous ethnic groups, while showing respect and appreciation for different cultures, religious groups, thoughts, and ideas”. This is in contrast to our age which “is marked by globalisation that is all too often viewed in narrowly economic terms, tending to erase the distinguishing features that shape the beauty and soul of our peoples,” the Pope said. But in Thailand, the Pope knew of “the experience of a unity that respects and makes room for diversity which serves as an inspiration and incentive for all those concerned about the kind of world we wish to leave to our children.”

In his visit to the Catholic Hospital of St Louis, located in the heart of the city, Pope Francis was received with an incredibly warm and touching welcome. There was much laughter, smiles, tenderness and tears (of joy). He encouraged the health workers to call the patients by name, and applauded the work that they do, stressing that suffering makes us relate to Christ’s suffering. A Catholic orthopedic surgeon in the hospital told us that the Pope’s visit has given him a spiritual boost to confront the difficulties at work. He was struck at how Buddhist doctors and employees in the hospital were equally excited to meet the Pope, whose figure they may not understand exactly, but whom, nonetheless, they esteem as a figure who promotes good will and peace.

The Catholic nurses and staff of the hospital shared the same sentiments. They expressed how they never feel prejudiced in Thailand. Some of them are married to Buddhists. They noted how in Thailand it is normal, as in their case, that their children are raised as Catholics, acknowledging the peaceful relationship among religions. The Thai Catholics attribute it to their overall peaceful and ‘smiling’ attitude and graciousness in living.

All together, the Pope celebrated two Masses in public in the evenings of November 21 and 22. The first public Mass attracted 67,000 faithful in Thailand’s National Stadium. Another few thousand people followed the Mass closely through giant video screens installed in the adjacent Thephasadim Stadium and surrounding areas. As expected, security was tight.But this did not dampen the general ambience of joy, familiarity and great anticipation.

Before the Mass, we prepared ourselves spiritually with hymns and prayers. A hymn that particularly resonated with the participants was that of “Give Thanks with a Grateful Heart”. The Rosary was recited in several languages. When the Pope arrived, the people welcomed him with shouts of “Viva il Papa” and waved Thai and Vatican flags. Smiles, tears and cameras taking pictures of Pope Francis filled the stadium.

In his homily, Pope Francis encouraged everyone to “continue to go forward in the footsteps of the first missionaries” who set foot in these lands and “came to realise that they were part of a family much larger than any based on bloodlines, cultures, regions or ethnic groups”. He encouraged everyone to have the same missionary zeal, aware “that evangelization is not about gaining more members or about appearing powerful. Rather, it is about opening doors in order to experience and share the merciful and healing embrace of God the Father, which makes of us one family”. 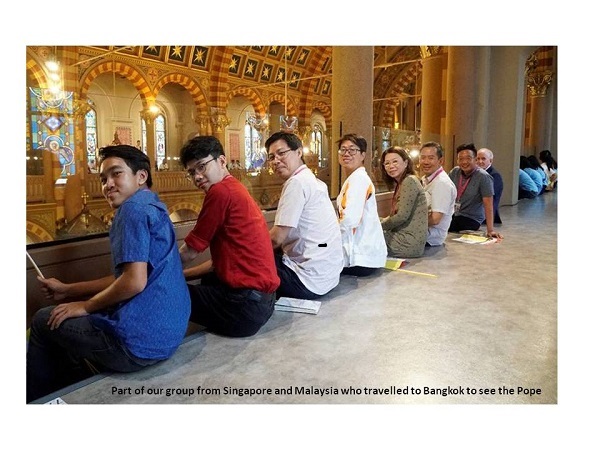 The second public Mass was held at the Assumption Cathedral for the youth. We were among the lucky ones to get tickets for this Mass, with seats just 15 to 20 metres away from where the Pope was celebrating. Even luckier was Fr Joe Lopez who came with us all the way from Singapore. He was among the many priests who took part in concelebrating the Mass with the Pope. 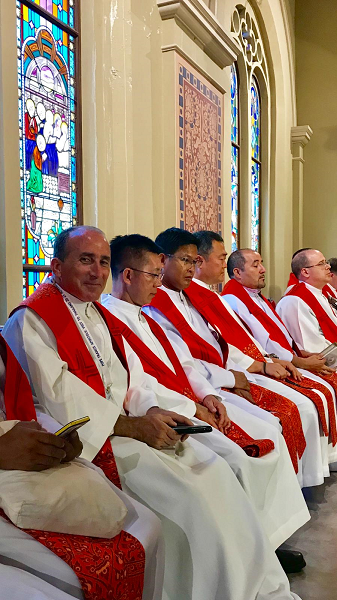 There were many young people who turned up and the Cathedral could not accommodate everyone. More video screens were set up in a nearby Catholic school and a College so the rest of the crowd could follow the Mass. The Pope went there before the Mass to greet those who could not be accommodated inside the Cathedral.

In his address to the youth, the Pope asked them to appreciate the faith received by their grandparents, parents, and catechists. At the same time, he encouraged them to go beyond this and to give answers to the new challenges in the world today, imitating the example of the first evangelisers of the gospel in Thailand.

The atmosphere in the Cathedral during the Mass was spectacular, solemn and familial.We overheard a priest translating the homily of the Pope from Spanish into English to a Chinese priest, who in turn translated it into Mandarin for his friend.

The first pews were assigned to handicapped children. After the Mass, Pope Francis took time to greet and bless each of them. It was difficult to say who was more moved, the young people receiving the Pope or the Pope himself, or all of us contemplating the scene. It was another example of the great paternity of Pope Francis, especially for the sick and the needy.

After Thailand, the Pope continued on with his pastoral visit to Japan. All of us returned to Singapore delighted to have seen the Pope in person, even from a distance. Now is the time to reflect and digest his words and follow his example of self-giving to others. But we also dream of having the Holy Father visit us in Singapore one day, perhaps soon.