48 hours with the Prelate of Opus Dei in Singapore

Bishop Javier Echevarría made a pastoral visit to Singapore and Malaysia from 1st to 3rd August 2008, during which he tirelessly encouraged members of Opus Dei and their friends to strive for holiness.

Following in the footsteps of St Josemaría, Bishop Javier Echevarría, the current Prelate of Opus Dei, met up with his children from South-east Asia, and their families and friends, during his stopover in Singapore. He was on a pastoral visit to several countries in Asia and Australia where stable apostolic work is being carried out by the Prelature.

Upon his arrival at Changi Airport at 5:40 pm on Friday, 1st August, he was greeted a number of the faithful of Opus Dei.

From the airport, he was delayed by a ‘massive jam’ – these words appeared on the information panel on the expressway – but took it in stride, suggesting to the others in the car to offer it up for the apostolic work being carried out in Singapore. He also prayed the first of many rosaries in Singapore on his way to the Opus Dei Centre.

That same evening, he had a short but intense get-together with a good number of young men, students hailing from China, Indonesia, the Philippines, India, Malaysia and Singapore. Putting them at ease by reminding them that Opus Dei is a family, he went on and dwelt on a recurring dream of St Josemaría’s, that of seeing persons of all races, tongues and ages living the spirit of Opus Dei in all parts of the world.

He told the young men to be generous, to study hard and to think about others: “Maybe in Singapore you don’t have poor people, in the material sense of the word. But there is always somebody who is alone and who needs company. We cannot leave these people alone.”

Recalling the recent World Youth Day in Sydney, he encouraged them to be apostles in this new Pentecost by spreading good doctrine and joy, by being good friends of their colleagues and by working well.

The following day, 2nd August, Bishop Echevarría, paid a visit to the local Ordinary, Archbishop Nicholas Chia. After the visit, he prayed briefly at the Cathedral of the Good Shepherd. He had wanted to pray before Our Lady of Perpetual Succour at Novena Church but desisted in view of the large crowd. He later remarked that what he did instead was to ask Our Lady to protect all those who were inside the church.

In the afternoon, there was a get-together with families, friends, members and cooperators of Opus Dei at the Grand Ballroom of Orchid Country Club in Yishun district. Close to a thousand attended, including some who had traveled with their families from Malaysia, Indonesia, Vietnam and Thailand.

In his opening remarks, the Prelate praised a particular characteristic of Singapore that invites us to pay attention to a facet of the spirit of Opus Dei. He said, “As you go along the streets, you can see that everything is perfectly clean and orderly. But we cannot just be happy with that. We have to realise that behind all the beauty and comfort of having the streets and homes clean, is the work of many people.

And, as I was telling you, this is very much in tune with the ascetical spirit of Opus Dei because St Josemaría has taught us that in order to do great things, we have to look after the little things too. …

Well then, don’t be concerned only about the ‘big’ things you do. Think and thank God and thank all those persons who carry out this selfless, hidden and silent work. If we all behave like this, the joy of seeing the things done well on earth will be transformed into joy in social relations, in dealings with one another. Be people who give thanks for this treasure that you have.” 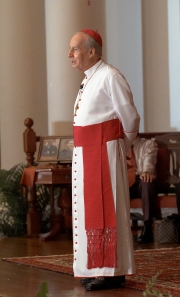 He also marveled at the contrast between Singapore’s small size and the reach of its port and invited his audience to apply it to their own lives. “Those of you who are here – whether due to birth, citizenship or work – if you offer your work to God, you can reach the furthest corner of the earth from here. (And you will want to do this) because an upright person, a person who knows how to be truly human, is interested in the whole world,” he said.

Before the get-together started, some people were asking how they should address the Bishop. The emcee explained that we simply address him as “Father”, since Opus Dei is one big family. After the get-together, someone wrote a blog and entitled it Opus Dei Gathering with “the Father” because “I could see how family-oriented the members of the (Opus Dei) prelature were.”

The family also figured prominently during the get-together, when Bishop Echevarria took some questions from the floor. Marjorie, a mother expecting her seventh child, told him about her fears that she could not give as much attention to her children as she would wish. Pleased with the generosity of mothers like Marjorie, he suggested that she rely on the help of her eldest daughter who could grow in her sense of responsibility to take care of the others. In addition, he encouraged her to find a job with flexible hours.

Mark, a young man from Penang, Malaysia and Nguyen, a cooperator from Ho Chi Minh City, Vietnam, asked when Opus Dei would start in their respective cities. To Mark, the Prelate said that he would like to start in Penang right away, but it depended largely on the prayers, work and sacrifice of people like himself.

He told Nguyen that many members had written to him to say that they were ready to go to Vietnam to start Opus Dei there. He stressed that there was a need to prepare – through prayer and mortification – that the Work can go there soon.

Toward the end of the 45-minute get-together (which everyone found too short), he encouraged all of those gathered to pray more for the Holy Father who desires the evangelization of all peoples. He emphasized the fact that being Roman Catholic meant being people of God, united in faith, hope and love with the successor of Peter.

In the evening, he had get-togethers with married members of Opus Dei at Guild House in the campus of the National University of Singapore. He stressed the importance of caring for one’s interior life, telling everyone that “if we are not careful, anything in the world would distract us from the spiritual panorama”.

He urged the husbands, “When you arrive home tired, say Lord, help me smile and make my family happy.” To the wives, he said, “Love your husbands more everyday. Once in a while he may make you angry. But don’t pull a face. Instead, smile at him and tell him I love you.” A Supernumerary who attended the get-together at the Country Club and at Guild House was impressed not only by what the Prelate said but by what he did. “He stood for the whole of both get-togethers. At his age (Bishop Echevarría turned 76 on June 14), it would be understandable that he sat down. Seeing his example, I have no reason to complain when I feel tired,” she said.

On 3rd August, Sunday, the Prelate crossed over to Johor Bahru at the southern tip of Malaysia, to celebrate Holy Mass and consecrate the altar of a conference centre where Opus Dei holds retreats and other activities. In his homily, he reminded the members of the great gift of their vocation and the need to be faithful.

At various moments during his visit, he dedicated short moments to greet families; he considered it “a delight” especially to be with the parents and siblings of the Numeraries of Opus Dei, and said that they should also consider themselves part of this great family which is Opus Dei. He gave them rosaries and some have begun praying the rosary since then, convinced that it is a great help.

Before departing that night, he made it a point to thank his children and give each of his sons a fatherly embrace. En route to Mumbai he wrote a fax message on the plane reminding them: “Dream daily of all the tasks awaiting you and be generous in your dedication. Grow in cheerfulness because God and all of Opus Dei are depending on you! Love one another truly!”