24th May: World Day of Prayer for the Catholic Church in China

24th May 2008, feast day of Our Lady Help of Christians, was proclaimed a World Day of Prayer for the Church in China as an act of solidarity and solicitude with the faithful of Asia.

24th May was proclaimed a World Day of Prayer for the Church in China as an act of solicitude and solidarity with the faithful of Asia.

The ceremonies in Torreciudad were lead by Father Jose Zheng, who has been working in Salamanca for the last 3 years, and by Father Javier Mora Figueroa, Rector of the Sanctuary. An image of our Lady, Queen of China, brought by faithful from the Miraculous Medal Parish in Taipei presided at the ceremonies.

Amongst those present were various Asian families from Madrid, Barcelona and Saragossa. Some among them had just recently embraced the Catholic faith, like young Zhao, who was baptized in the Cathedral of Barcelona last year. Similarly, Lan became a Catholic faithful in Rome last Easter.

Catholic communities in China have organized prayers, novenas and festivities leading up to the World Day of Prayer for the Church in China. Some prayer encounters which included non-Christian participants were also held. Some events included a special prayer to Our Lady of Sheshan , Our Lady Help of Christians, asking that she come to the aid of all Christians and protect China, allowing for an abundant flourishing of the evangelisation effort. 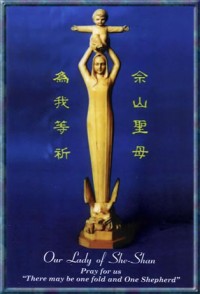 The diocese of Hong Kong said, "It is the wish of the Holy Father that the faithful will more and more yearn for and put into practice the supernatural virtues, especially faith, hope and charity, and that they will strengthen their communion with the Roman Pontiff, who is the visible foundation of the unity of the whole Catholic Church."

On the 24th May World Day of Prayer, Benedict XVI asks the "Mother of China and all Asia" to support the faithful, that "they never be afraid to speak of Jesus to the world, and of the world to Jesus", and "always be credible witnesses to this love, ever clinging to the rock of Peter".

Virgin Most Holy, Mother of the Incarnate Word and our Mother, venerated in the Shrine of Sheshan under the title "Help of Christians", the entire Church in China looks to you with devout affection. We come before you today to implore your protection. Look upon the People of God and, with a mother’s care, guide them along the paths of truth and love, so that they may always be a leaven of harmonious coexistence among all citizens.

When you obediently said "yes" in the house of Nazareth, you allowed God’s eternal Son to take flesh in your virginal womb and thus to begin in history the work of our redemption. You willingly and generously cooperated in that work, allowing the sword of pain to pierce your soul, until the supreme hour of the Cross, when you kept watch on Calvary, standing beside your Son, who died that we might live. From that moment, you became, in a new way, the Mother of all those who receive your Son Jesus in faith and choose to follow in his footsteps by taking up his Cross. Mother of hope, in the darkness of Holy Saturday you journeyed with unfailing trust towards the dawn of Easter. Grant that your children may discern at all times, even those that are darkest, the signs of God’s loving presence. Our Lady of Sheshan, sustain all those in China, who, amid their daily trials, continue to believe, to hope, to love. May they never be afraid to speak of Jesus to the world, and of the world to Jesus. In the statue overlooking the Shrine you lift your Son on high, offering him to the world with open arms in a gesture of love. Help Catholics always to be credible witnesses to this love, ever clinging to the rock of Peter on which the Church is built. Mother of China and all Asia, pray for us, now and for ever.  Amen!

Excerpt from the Pope’s Letter to the Catholic Church in China, dated May 27, 2007:

"Dear Pastors and all the faithful, the date 24th May could in the future become an occasion for the Catholics of the whole world to be united in prayer with the Church which is in China. This day is dedicated to the liturgical memorial of Our Lady, Help of Christians, who is venerated with great devotion at the Marian Shrine of Sheshan in Shanghai. I would like that date to be kept by you as a day of prayer for the Church in China. I encourage you to celebrate it by renewing your communion of faith in Jesus our Lord and of faithfulness to the Pope, and by praying that the unity among you may become ever deeper and more visible…On that same day, the Catholics of the whole world – in particular those who are of Chinese origin – will demonstrate their fraternal solidarity and solicitude for you, asking the Lord of history for the gift of perseverance in witness, in the certainty that your sufferings past and present for the Holy Name of Jesus and your intrepid loyalty to his Vicar on earth will be rewarded, even if at times everything can seem a failure" (no. 19).