3 Microhistories about the Priestly Society of the Holy Cross

The historian Santiago Martínez talks about three early members of the Priestly Society of the Holy Cross, founded by Saint Josemaría in 1943. Today its members number more than 4,000 clergy all around the world. 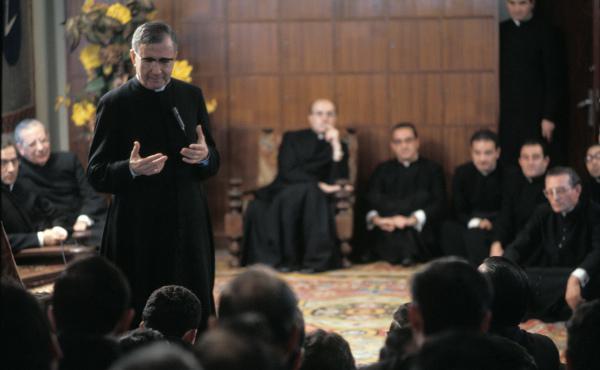 (Translation of the transcript of a podcast that can be found here.)

In 1943 Saint Josemaría founded the Priestly Society of the Holy Cross, made up exclusively of clergy and intrinsically united to Opus Dei. Until then, only lay men and women were connected with Opus Dei. In short, ordinary people. To help them better, priests of Opus Dei were needed who knew and lived its message, coming from the lay members of the Work. Hence the first members of the Priestly Society were numerary members. That is, celibate men of Opus Dei who were ordained priests and to whom the founder entrusted pastoral duties.

Wanting also to help the diocesan clergy, in 1950 Saint Josemaría asked the Holy See that priests incardinated in their own dioceses might also form part of the Priestly Society, and permission for this was granted.

These priests, who we will talk about at more length below, were still incardinated in their respective dioceses, and their bishops still exercised authority over them, assigned them their duties, and so on. The Work gave them (and gives them) spiritual encouragement to try to help them be good priests, holy priests. This help is the same that the lay members of the Work receive in their effort to live the message of sanctifying daily life: circles, retreats, workshops, spiritual direction, etc.

Currently, the Priestly Society is made up of about 4,000 priests from all over the world. Half already formed part of Opus Dei as numeraries before being ordained priests. And another two thousand – more or less -- are diocesan priests in many countries, such as the Philippines, the United States, Nigeria, Latvia, Chile and Lebanon.

I have done extensive research on the history of this society through archives and interviews with some of these priests, among them the few still alive who requested admission in the 1950s, and others who requested admission to the Priestly Society in the 1960s and later. It is a fascinating story, and I want to share with you three microhistories here.

A priest in the Pyrenees

Jaume Font i Espigolé was born in Gerona, near Barcelona. Ordained a priest when he was 23 years old, he was one of the first priests from the diocese of Gerona to ask for admission to the Priestly Society of the Holy Cross. That was in March 1954. He served as a priest in various villages of that diocese, including Torroella de Montgri and Beget, in the valley of Camprodon, in the Pyrenees. At that time, Beget had no access roads. No wheeled vehicles could reach it, not even carts or bicycles. All transport was done with pack mules and, as Fr. Jaume recalls, was very expensive. Nevertheless, electricity and the telephone had arrived, and the postal service also worked well.

His life was not an easy one. Every Sunday he celebrated three Masses and preached and heard confessions in Beget, but, according to his own account, without anyone coming for confession on most Sundays. He looked after other churches in nearby villages, including Rocabruna. And after walking for several hours on Sundays to get there, he would often find only five or six women and children and two or three men attending the Mass, out of the 150 inhabitants of the village.

Fr. Jaume once confided in a letter: “The greatest temptation we have is the lack of effectiveness in our priestly work. Am I useful here? This is the question that I often ask myself. I preach and everyone stays the same. I approach the faithful and many turn away. I get tired and they go their own way.”

Spain was then a Catholic country. But religious practice in many places was scarce. In any case, what encouraged Fr. Jaume, in the midst of this coldness and isolation, was to sense he was part of a spiritual family, that of Opus Dei, which had opened its doors, in 1950, to priests incardinated in the dioceses. In his letter requesting admission, dated March 1, 1954, he said: “From that day on I have lived another life; in truth I have been born again into another life. I am more optimistic, a man of more prayer, of more sacrifice, and I live poverty better. I am happier today than I’ve ever been, except for the day of my ordination. I give myself to the Work without hesitation or haggling.” For Mosén Jaume (as priest are addressed in Catalonia) and for many other priests around the world, feeling understood, helped and accompanied by other priests of the Work was a great help, as he himself testifies.

The second microhistory is that of Fr. José Domínguez. He was born in Pontevedra, Spain, in 1932, close to the Portuguese border. He is still alive and enjoys good health. His mother supported him in his decision to attend the seminary and leave their village, where he looked after animals and worked in mountain reforestation. But he first had to find a scholarship since his mother had no means to pay for his studies.

His father was a member of the Communist Party and had emigrated to Argentina before the Spanish civil war. After the war, his father brought his mother and two brothers to Argentina. He tried to convince his son to leave the seminary and come to Argentina as well, to prevent him from becoming a priest. But José refused, and he was ordained 1960 and asked for admission to the Priestly Society of the Holy Cross .

His humble origins and concern for simple people have marked his life as a priest. As a seminarian, he spent his summer vacations in Bilbao and Zaragoza, working in the Mercier workshops and in the Spanish naval yards. After he was ordained, his bishop assigned him to the parish in Lavadores, a neighborhood of Vigo known colloquially as Little Russia because of the many Communists living there. He told me he thinks that he too would have become a revolutionary during those 1960s and 70s of great political upheaval in Spain, had it not been for Opus Dei.

His parish duties in the service of the diocese also led him to be a chaplain for many years in a school in Vigo. He told me he never experienced any tension between prayer and action, between caring for divine worship and assisting the most needy. In fact, he says the Priestly Society of the Holy Cross helped him put into practice much of what he had learned in the seminary about the inclusive nature of love for God and others, particularly for the poorest.

From Teruel to Peru

The third story is that of Fr. José de Pedro. He was one of the children of the postman in Hinojosa de Jarque, a small village in the Spanish province of Teruel. His mother died when he was 9 years old.

In 1957, when he was 26 years old and had been a priest for two years, he went to Peru to lend a hand in the territorial prelature of Yauyos, which the Holy See had recently entrusted to Opus Dei. Fr. José wrote to his family every two weeks. recounting his adventures in Matucana, in the Peruvian province of Huarochirí. His family kept the hundred long letters he wrote to them during the six years he spent in Peru.

There he administered the sacraments to many people: baptisms, Holy Communions, anointings and visits to the sick, weddings... He gave catechism lessons, and religion classes in a primary school for boys and girls. He carried out improvement projects in some of the churches and rectories, and refurbished the vestments and objects of worship. He distributed food packages and clothing to those affected by “huaicos” (destructive landslides that bury everything in their path). He also started a credit union to give low-interest loans to people who had lost everything in these natural disasters.

During the first year of his stay there, he wrote down a partial summary of his priestly work: “Up to today (September 18, 1958) I have baptized 170 children; I have heard 1300 confessions and distributed over 1000 communions; I have performed 30 marriages, given 300 sermons, traveled 160 hours by car, 70 hours on horseback and 13 on foot. Every day I write down these things so that I can have some sense of the whole picture when I return.”

The truth is that measuring all the good a priest does is an impossible task in this world. I imagine that he did the best he could, with the help of his bishop, Ignacio de Orbegozo, and the other priests in Yauyos. And likewise when he returned to Teruel, his diocese in Spain, where he served as a priest in 12 parishes, until his death in May 2020, carrying out many other projects that I have no time to speak about here.

Helping to serve the Church

What does the Priestly Society of the Holy Cross contribute to the lives of these priests? It has helped them, first of all, to have a spiritual life. As one of them put it, it reminds them of “the gift of God that we ordinary priests should have a hunger for holiness,” a hunger for God that always includes concern for others, for their fellow priests in the first place and for all the faithful. In short, it has helped them to be faithful to their priestly vocation.

I have seen how it encourages them to be loyal to their bishops and to the Pope in carrying out the tasks entrusted to them, and in following the sacramental, pastoral and magisterial guidelines of the Church. It also encourages them to look for young people from their parishes who could study at the seminary.

And finally, it reminds them that they need to sanctify themselves through their professional work, which in their case is their ministry as a priest. So they try to take good care of their churches and, above all, to serve their parishioners, accompanying people and bringing spiritual comfort with the sacraments, alleviating material needs if possible, as the Church has always done.

In short, the Priestly Society encourages them to have a very big heart, to welcome everyone, and to serve each one in their personal needs.

Certainly it is a very high ideal. It is difficult for a historian to say to what extent this ambitious aspiration has been made a reality. But I would dare to affirm that, in these first decades of its life, many priests of this Priestly Society have believed in this ideal and tried to make it a reality. And that in the last decades of the 20th century and the first decades of the 21st, which have been agitated and trying times for the Church and for Christians, they have offered their fellow citizens the loving face of Jesus of Nazareth.

For other "microhistories" about the Priestly Society of the Holy Cross see:

"When he calls me to his side, I'll come riding on my horse"

High in the Peruvian Andes