Saint Josemaria in the Persian Gulf (I): Some Context

Dubai is just one of the seven United Arab Emirates. It’s a place where more than 70% of the population is made up of foreigners. They come from Asia, Europe and America and, affected by the economic crisis in different ways, have abandoned their country to look for new work opportunities. A Muslim country where practicing the Christian faith is a challenge that Christians have been facing for centuries. 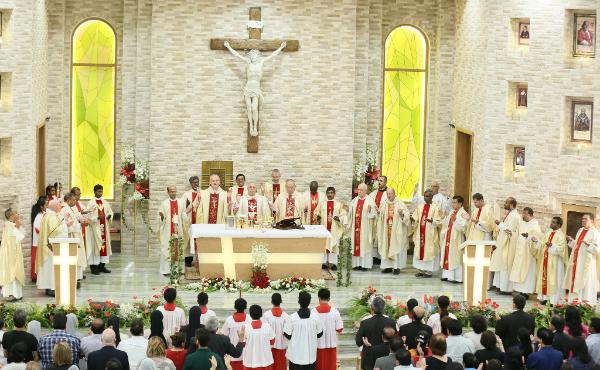 Concelebration for the Dedication of Saint Theresa's Chapel (Courtesy of avosa.org).

The Christian footprint on the Arabian Peninsula goes back to the 4th and 5th centuries. Following the arrival of Islam in the 7th century, Christianity practically disappeared from the map. The current Catholic presence, which has grown rapidly since the 90s, is due above all to the presence of faithful from other countries who have moved there for work reasons. And they are not a few: in fact, to the surprise of many, they number in the millions.

The Vicariate of Arabia dates its tradition back to the Latin Patriarchate of Constantinople, from which the Apostolic Vicariate of Aleppo (Syria) split in the 18th century. During the nineteenth century, Arabia was dependent on different vicariates, with other territories such as Syria, Egypt and Cyprus, until it became independent in 1859, first as the apostolic prefecture of Aden (Yemen) and since 1889 as apostolic vicariate of Arabia, which included the territories of Kuwait, the Arab Emirates, Bahrain, Qatar, Oman, Yemen and Saudi Arabia.

In 2011 the pastoral care of the area was reorganized into two apostolic vicariates: Northern Arabia (Kuwait, Bahrain, Qatar and Saudi Arabia) and Southern Arabia (Arab Emirates, Oman and Yemen).

In 1954, the Apostolic Vicariate of Kuwait was established, as something apart from the rest of the peninsula. In subsequent decades, the population of the area grew enormously: from 11 million in 1960 to 35 million in 1990, 47 million in 2000, and reached 77 million in 2014, with so many people coming from other countries. For this reason, in 2011 the pastoral care of the area was reorganized into two apostolic vicariates: Northern Arabia (Kuwait, Bahrain, Qatar and Saudi Arabia) and Southern Arabia (Arab Emirates, Oman and Yemen).

Traditionally in the Church, the missionary commission (ius commissionis) in that territory has been the responsibility of the Capuchins and, in some areas, the Carmelites, who still have a relevant presence, although among the hundred priests who attend the faithful, there are also diocesan priests, Salesians, Maronites, etc. The apostolic vicars are the bishops, Mons. Camillo Ballin, a Comboni missionary of the Latin rite, based in Kuwait, and Bishop Paul Hinder, a Capuchin, based in Abu Dhabi.

Although it is difficult to have accurate data, it is estimated that Catholics far exceed one million in Saudi Arabia, and are about 350,000 in Kuwait, 80,000 in Bahrain and 300,000 in Qatar, while between the Arab Emirates, Oman and Yemen, they amount to almost one million. 80% are of Latin rite and the rest of several oriental rites, from more than a hundred countries of origin and with a strong presence of Southeast Asians.

There are few churches and few priests, the worship is in many languages and rites, the day of precept is usually moved to Friday, Masses are multitudinous...

In many of these countries, the Church can practice her faith privately and, with certain restrictions, also publicly. This gives rise to some peculiarities: for example, there are few churches and few priests, the worship is in many languages and rites, the day of precept is usually moved to Friday, Masses are multitudinous... In each country (except Saudi Arabia) there are parishes, though without external symbols of the Christian faith, in places dedicated to non-Islamic religious confessions, with a very active participation of the faithful, despite the fact that working conditions often do not facilitate attendance at Mass.

The case of Dubai

Dubai is one of the seven Emirates that make up the United Arab Emirates. The peculiar development of the area in the last decade has produced an unusual demography: of the two and a half million inhabitants, a very high percentage of them are foreigners (although there are no official statistics, it is estimated that it is close to 90% of the whole UAE). Men make up 70% of the population, and almost 60% of them are between 25 and 44 years old.

The Catholics of Dubai are organized into two parishes: St. Mary’s, which opened in the 60s in the capital, and St. Francis of Assisi, in Jebel Ali, which opened in 2001. They are built on land donated by the Emirate. It is said that St. Mary’s is the parish with the most parishioners in the world: about 300,000

The pastoral attention of the faithful requires an intense sacramental life. On days of precept, several Masses are celebrated in English, plus some in other languages: Tagalog (Philippines), Konkani (India), Malabar (India), Tamil (India, Sri Lanka and Singapore), Sinhala (Sri Lanka), Urdu (India and Pakistan), Arabic, Korean, Spanish, Portuguese, German, French, Italian, Polish, Slovak or Ukrainian. Then there are the celebrations in other Catholic rites: Malankar, Melquita or Maronite. All of them full of people, with thousands of people in attendance. The catechetical groups and the pastoral council also reflect the different communities that make up the parish.

In Dubai, a desert on an ocean, the promises of the Old Testament seem to fulfilled themselves once again: the People of God is more numerous than the grains of sand on the beach or the drops of water in the sea.