Spring Publications in Hong Kong publishes the writings of St Josemaria in Chinese. Lucia Kwong describes some of their creative initiatives at the annual Hong Kong book fair. 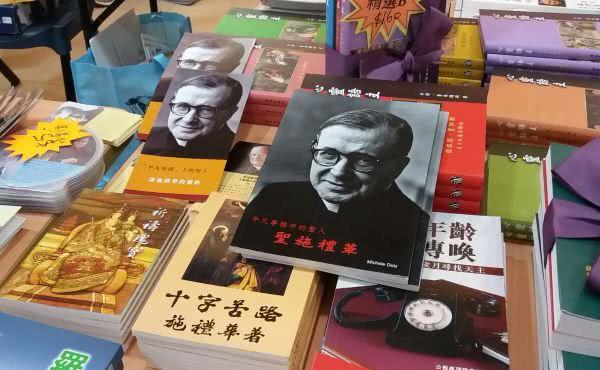 
Spring Publications is a Hong Kong based publisher and distributor of Catholic spiritual books. Many of our books are Chinese translations of the writings of Saint Josemaria, the founder of Opus Dei. Recently, we have been visiting different parishes in Hong Kong for book sales and through this, we reach out to parishioners, talking to them about God, their families, and praying for them. Besides explaining to them about our books, we also give out prayer cards of Saint Josemaria and let them know about the various activities available at the centers of Opus Dei in Hong Kong. In this way, people get to know about Saint Josemaria's message and spirit.

Aside from selling books at the fair, we also invite guests to give talks or to share personal testimonies that can inspire people to be better or to improve their relationship with God.

We have been to about 30 parishes in Hong Kong. Many volunteers help in this initiative and among them are cooperators, friends and others who attend doctrine classes as well as their family members, and other members of their parishes. It is a great way to meet people. Some parishes have also invited us to do book sales during the opening day of their Sunday School. Other times, parish librarians have even contacted us for books!

The past few years, we have also participated in the Hong Kong Book Fair, an annual week-long event held at the Hong Kong Convention and Exhibition Centre. We have been one of the participants in the Catholic Diocese of Hong Kong section. There, our volunteers offer to describe the contents of the books, explaining a bit about Catholic doctrine in the process, and eventually the people decide to buy the books! 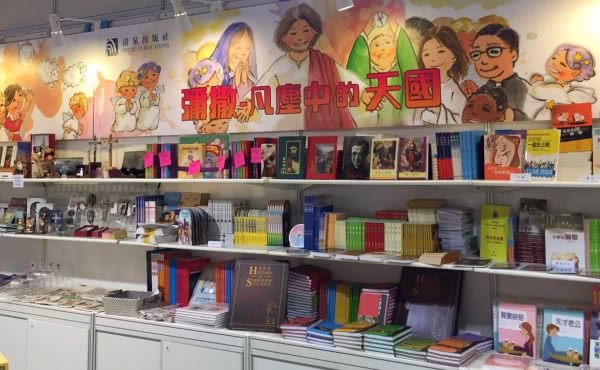 Aside from selling the books, we also make use of a small stage at the Book Fair, provided to us by the Catholic Diocese, where we have invited guests to give talks or share personal testimonies that can inspire the audience to be better or improve their relationship with God. We have invited authors to speak about their books, and there have also been musical performances and drama club performances, for which we created a children’s drama club.

Since it’s a big event and involves a lot of volunteers, we spend a few months preparing for it, as we would like to make our booth very attractive so as to bring in more visitors. We are very grateful for the generosity and dedication of more than a hundred volunteers helping us at our annual Book fair.

In 2016, the theme of our booth at the Book Fair was the Holy Mass. We had just published a new book 與耶穌的約會 which is the Chinese edition of a book entitled A Date with Jesus. This beautiful book gives a succinct explanation of every part of the Holy Mass with interesting pull-out flaps, providing details of prayers, responses as well as suggestions for kids about what to do. Moreover, this book is meant to work as an easy guide for parents and Sunday school tutors to explain the importance and the meaning of the Mass, which is an important weekly “date with Jesus” for us. Since the Chinese edition sold so well, in 2017 we decided to start offering the English version as well. We hope that through this, many children will understand more about the Holy Mass!

One of our children's books explains every part of the Holy Mass with pull-out flaps, providing details of the prayers, responses as well as suggestions for kids about what to do.

Stella, one of our volunteers, wrote a script based on the story of this children’s book. So we also created a drama club with Stella as the person-in-charge. Christie, a young lady who studied Performing Arts, together with her friend at the parish, Dominic (a producer and actor himself), are the directors of our drama club. There are also a number of young actors, ages 5 through 15 years old, who play different roles, such as, the role of Jesus, the angels, parents and children. John, another volunteer, had the role of the voice of God the Father in the script.

We are very lucky to have received a lot of help from the parents of these young actors. They assisted the drama club, by helping to sew, shop for costumes, prepare the props, help us during rehearsals and even during the performance itself! The play turned out to be a big success at the Book Fair. It drew large crowds and also received a lot of positive feedback. The Hong Kong Diocesan Catholic newspaper Kung Kau Po covered the story and it featured a full page in the newspaper. There were interviews and after the first showing, we received many other invitations to perform in Catholic schools, Sunday schools and one time in a parish event in Chai Wan. This group of young actors are also our “young evangelists”, as Kung Kau Po called them. 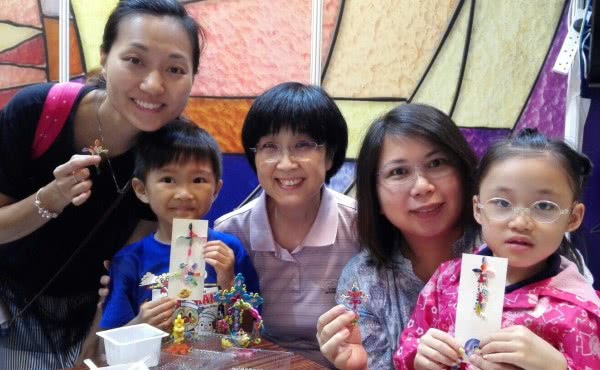 In 2017, the theme of our booth was 恩賜, which means “Gift”, and we focused on the Ten Commandments. We published a book for children: “The Ten Commandments - A Covenant of Love”, which was designed in such a way that, when it is unfolded, it turns into a cross! In addition, we also introduced an educational Board Game about the Ten Commandments. There are 120 small cards, and except for a few blank cards, on each card you find either a commandment, or a short phrase, which describes a certain behavior related to one of the commandments. So as the children play the game, they will have a deeper understanding of all the commandments. At the our booth, there is a "Game Corner", where visitors can play this game with our volunteers. This corner is where the action is, and it definitely turned out to be a very popular game! Together with all this, there are questions for Examination of Conscience and an Act of Contrition.

With all our efforts for the book sales, we recall what Blessed Alvaro wrote in a Pastoral Letter sent in December of 1985, where he said, “We need more apostolic vibration - much more! - more commitment to souls, more openings for meeting people.” All this makes me realize that, when we evangelize, when we do apostolate, it can help to have a little more imagination, a little more creativity, and things will happen… we just have to give it a go!