Ernesto Cofiño was born in Guatemala City on June 5, 1899. 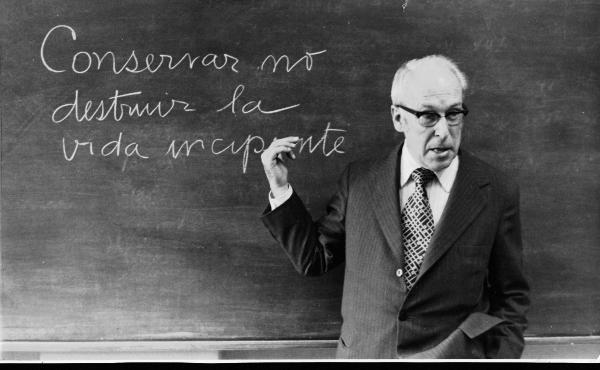 Ernesto Cofiño was born on June 5, 1899, in Guatemala City, where he attended high school. He studied medicine at the University of Paris, graduating with honors as a surgeon in 1929.

Back in Guatemala, he married in 1933 and started a family that eventually would have five children.

He devoted himself wholeheartedly to his work as a doctor. Besides looking after the physical health of his patients, he tried to assist them in their personal difficulties as well.

His strong faith in God and deep respect for human life led him to foster and defend the right to life from conception and care for life until natural death. He inspired and promoted organizations that work for the good of future mothers, street children and orphans. He worked in many of these organizations himself, and was instrumental in financing homes for the needy and centers of social assistance and served as Director of the National Hospice Center for four years.

A pioneer in pediatric research in Guatemala, he created the Chair of Pediatrics in the Medical Faculty of the University of San Carlos, Guatemala, where he was professor for twenty-four years. The University Medal was conferred on him in recognition of his generous dedication to teaching.

In 1956, Ernesto joined Opus Dei as a supernumerary member. From then on he drew closer to God in prayer and penance. He attended Mass and received Holy Communion daily, and went to Confession weekly. His devotion to our Lady grew, and he became a great promoter of saying the Rosary daily.

His apostolic activity also intensified, and he transmitted his joy and generosity to many people. He urged them to help promote Christian social projects, with their prayer and financial support, and put many hours into those projects himself, determined to make the Church's social teaching a reality. He likewise deepened his study of doctrine and his religious formation.

He was heroic in helping organize training and educational programs for women from very poor backgrounds and other works of charitable assistance, continuing this work right up to his ninety-second year.

After a long and painful illness, which he bore serenely and without complaining, Ernesto died of cancer on October 17, 1991, in Guatemala City. His cause of canonization was opened in Guatemala on July 31, 2000.