A newsletter about the beatification of Blessed Alvaro del Portillo in September 2014 in Madrid. 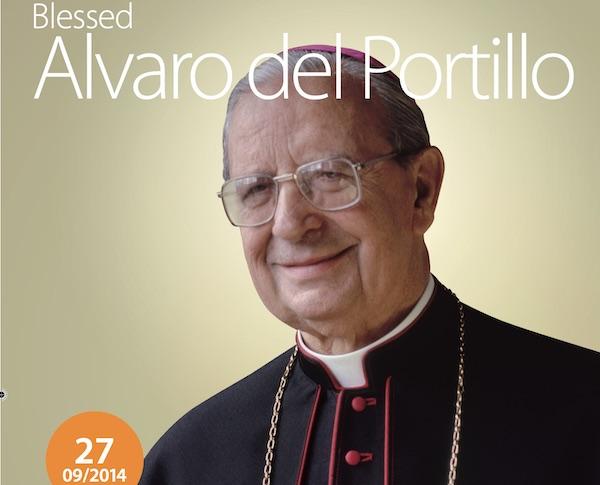 On 27 September 2014, Alvaro del Portillo, Bishop Prelate of the Prelature of the Holy Cross and Opus Dei, was beatified. He was the first successor and a most faithful son of Saint Josemaría Escrivá, founder of Opus Dei. The ceremony took place in Madrid, presided over by the Holy Father’s representative, Cardinal Angelo Amato, Prefect of the Congregation for the Causes of Saints.

For the beatification, Pope Francis wrote a letter to the Prelate of Opus Dei, Bishop Javier Echevarría. After expressing his joy at this event, the Holy Father said that “Blessed Alvaro del Portillo is sending us a very clear message. He is telling us to trust in the Lord, that He is our brother, our friend, who never lets us down and is always at our side. He is encouraging us not to be afraid to go against the current and suffer for announcing the Gospel. He is also teaching us that in the simplicity and ordinariness of our daily lives we can find a sure path to holiness.”

“The life of this good and faithful servant”, the Prelate of Opus Dei has written, “is summed up in a full fidelity to God’s plan for himself and his mission on earth. From here stemmed his unfailing peace, the joy to which so many of us were witnesses. In stating that he now shares in the glory of the blessed, and holding him up as an example of a loyal follower of Christ, the Church reminds us of the path we have to follow to attain union with God, to which all of us are called, being happy already here below” (Letter from the Prelate of Opus Dei, 1 October 2014).

This day will never be forgotten by the many thousands of people who took part in the beatification ceremony, by those who followed it on television and the internet, or by all those who were present at the Thanksgiving Masses celebrated afterwards in many places all over the world.

This newsletter includes the letter from Pope Francis, the homilies of the Beatification Mass and Thanksgiving Masses and news of the various events around the beatification, both in Madrid and in Rome.