Commentary on the Gospel: The Cross and Glory

Gospel for the 2nd Sunday in Lent (Cycle B), and commentary. 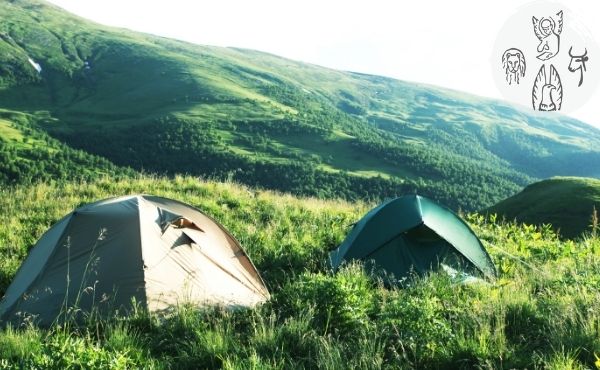 And after six days Jesus took with him Peter and James and John, and led them up a high mountain apart by themselves; and he was transfigured before them, and his garments became glistening, intensely white, as no fuller on earth could bleach them. And there appeared to them Elijah with Moses; and they were talking to Jesus. And Peter said to Jesus,

“Master, it is well that we are here; let us make three tents, one for you and one for Moses and one for Elijah.” For he did not know what to say, for they were exceedingly afraid. And a cloud overshadowed them, and a voice came out of the cloud,

“This is my beloved Son; listen to him.”

And suddenly looking around they no longer saw any one with them but Jesus only.

And as they were coming down the mountain, he charged them to tell no one what they had seen, until the Son of man should have risen from the dead. So they kept the matter to themselves, questioning what the rising from the dead meant.

The Gospel of Mark places this scene in an unsettling moment for the apostles. Jesus had just told them with all frankness: “If any man would come after me, let him deny himself and take up his cross and follow me. For whoever would save his life will lose it; and whoever loses his life for my sake and the gospel’s will save it” (Mk 8:34-35). Given such a stern warning, it is easy to understand his disciples’ perplexity and fear.

So now Jesus wants to nourish their hope, by manifesting his glory to Peter, James and John. He climbs a high mountain, accompanied by three disciples, just as Moses went up Mount Sinai in the company of Aaron, Nadab and Abihu, followed from afar by the elders of the people (Ex 24:9). These same three apostles would also be the ones he asks to stay beside him in Gethsemane, while the others remain at a distance as Jesus prays in agony (Mk 14:33). The two scenes in which Peter, James and John accompany him – one of joyous splendor and the other of anguished suffering – stand in clear contrast to one another, but they are also inseparably united. For there is no glory without the cross.

Elijah and Moses, who had contemplated the glory of God and received his revelation on the mountain called Horeb or Sinai (cf. 1 Kgs 19:8 and Ex 24:15-16), were next to Jesus on this high mountain when “he was transfigured before them, and his garments became glistening, intensely white, as no fuller on earth could bleach them” (vv. 2-3). Now they contemplate the glory and speak with the One who is the revelation of God in person.

Peter cannot contain his joy and exclaims: “Master, it is well that we are here; let us make three tents, one for you and one for Moses and one for Elijah” (v. 5). His petition expresses the deepest desire of every human heart to joyously contemplate God’s glory forever. As Saint Josemaria exclaimed: “Jesus, we want to see you, to speak to you! We want to contemplate you, immersed in the immensity of your beauty, in a contemplation that will never cease! It must be wonderful to see you, Jesus! It must be wonderful to see you and be wounded by your Love!”

From the luminous cloud enveloping them they hear these words: “This is my beloved Son; listen to him” (v.7). The expression “my beloved Son” is an echo of God’s words to Abraham asking him to sacrifice his son Isaac: “your beloved son” (Gen 22:2). Abraham’s willingness to sacrifice Isaac, who accompanied him without resistance, thus foreshadows the drama on Calvary where God the Father offered his Son in a freely accepted sacrifice for the redemption of the human race. Moreover, the words “listen to him” can be seen as an echo of the words Moses addressed to the people of Israel in the book of Deuteronomy: “The Lord your God will raise up for you a prophet like me from among you, from your brethren—him you shall heed” (Deut 18:15).

Pope Francis, when commenting on the scene of the Transfiguration, said: “I would like to take two significant elements that can be summed up in two words: ascent and descent. We all need to go apart, to ascend the mountain in a space of silence, to find ourselves and better perceive the voice of the Lord. This we do in prayer. But we cannot stay there! Encounter with God in prayer inspires us anew to ‘descend the mountain’ and return to the plain where we meet many brothers and sisters weighed down by fatigue, sickness, injustice, ignorance, poverty both material and spiritual. To these brothers and sisters in difficulty, we are called to bring the fruit of that experience with God, by sharing the grace we have received.”