Commentary on the Gospel: "Prepare the way of the Lord"

Gospel for the Second Sunday in Advent (Cycle B), and commentary. 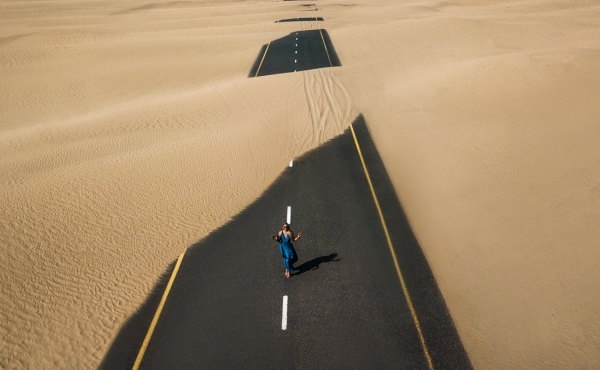 The beginning of the gospel of Jesus Christ, the Son of God.

As it is written in the prophets,

“Behold, I send my messenger before your face,
who will prepare your way,
the voice of one crying in the wilderness:
‘Prepare the way of the Lord,
make his paths straight,’”

John appeared, baptizing in the wilderness and proclaiming a baptism of repentance for the forgiveness of sins. And all the country of Judea and all Jerusalem were going out to him and were being baptized by him in the river Jordan, confessing their sins. Now John was clothed with camel's hair and wore a leather belt around his waist and ate locusts and wild honey. And he preached, saying, “After me comes he who is mightier than I, the strap of whose sandals I am not worthy to stoop down and untie. I have baptized you with water, but he will baptize you with the Holy Spirit.”

On this second Sunday in Advent we begin reading the Gospel according to Saint Mark, which is the Gospel account used on most of the Sundays and Solemnities during this liturgical year.

The first sentence is a brief synthesis of the entire apostolic preaching witnessed to in this book: “The beginning of the gospel of Jesus Christ, the Son of God” (v. 1).

“Gospel” is the English translation of the Greek word εὐαγγέλιον (“evangelium” in Latin), which means “good news.” What is this good news that all peoples are eager to hear about? It is the announcement that Jesus is the Christ (that is, the Messiah, the descendent of David whose kingdom will never end), and that He is the Son of God made man who came into the world to save us.

The proclamation of this good news is an ongoing story in which each of us is called to be a protagonist. In the Gospels we find the strength and key reference points for our own lives and for the mission incumbent upon all Christians to make this joyous message reach all men and women down through the ages.

The prophets of the Old Testament had announced God’s intervention among us. He sent messengers to console his people and prepare for his coming, so that the Saviour would find the doors of human hearts open when He comes.

At the beginning of his Gospel Saint Mark cites some words from the prophet Malachi: “Behold, I send my messenger to prepare the way before me” (Mal 3:1), and also from Isaiah: “In the wilderness prepare the way of the Lord, make straight in the desert a highway for our God” (Is 40:3).

To prepare the way for Jesus, God sent a precursor, John the Baptist. Saint Mark presents him as an austere man who wore a garment of camel’s hair tied with a leather belt and ate locusts and wild honey, the simplest food to be found in the desert of Judea.

On one occasion, when speaking with his disciples, Jesus contrasts him with the rich who are “clothed in soft raiment” and live “in kings’ houses” (Mt 11:8). This example is particularly opportune during these days, Benedict XVI tells us, “especially in preparation for the celebration of the Christmas festivity, in which the Lord, as Saint Paul would say, ‘though he was rich, yet for your sake he became poor, so that by his poverty you might become rich’ (2 Cor 8:9).”[1]

The message of John the Baptist, besides offering witness to a temperate lifestyle, is also a forceful call to conversion. His words stir the hearts of people to seek a deep interior change which begins with the recognition and confession of their own sins.

During this time of Advent, we are invited to make a sincere examination of our own lives, and to prepare the way for the Lord, rectifying anything in our life that may have distanced us from Him.

Saint Josemaria said: “This time of Advent is a time for hope. These great horizons of our Christian vocation, this unity of life built on the presence of God our Father, can and ought to be a daily reality. Ask our Lady, along with me, to make it come true. Try to imagine how she spent these months, waiting for her Son to be born. And our Lady, Holy Mary, will make of you alter Christus, ipse Christus: another Christ, Christ himself!”[2]