Commentary on the Gospel: "I am not worthy to untie his sandals"

Gospel for the 3rd Sunday in Advent (Cycle B), and commentary. 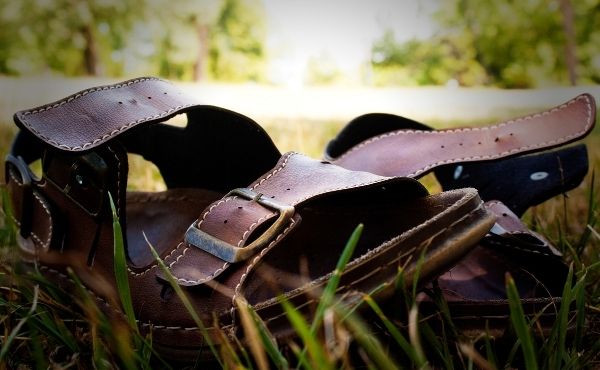 And this is the testimony of John, when the Jews sent priests and Levites from Jerusalem to ask him, “Who are you?” He confessed, he did not deny, but confessed, “I am not the Christ.” And they asked him, “What then? Are you Elijah?” He said, “I am not.” “Are you the prophet?” And he answered, “No.” They said to him then, “Who are you? Let us have an answer for those who sent us. What do you say about yourself?” He said, “I am the voice of one crying in the wilderness, ‘Make straight the way of the Lord,’ as the prophet Isaiah said.”

Now they had been sent from the Pharisees. They asked him, “Then why are you baptizing, if you are neither the Christ, nor Elijah, nor the prophet?” John answered them, “I baptize with water; but among you stands one whom you do not know, even he who comes after me, the thong of whose sandal I am not worthy to untie.”

This took place in Bethany beyond the Jordan, where John was baptizing.

The Gospel for the Third Sunday of Advent tells us about the witness John the Baptist gave to the priests and Levites sent from Jerusalem. In Jesus’ times, the expectation that the Messiah would come soon was widespread. The historian Flavius Joseph relates that a number of people even claimed to be the Messiah promised by God to free his people. The Baptist’s reputation for sanctity was so great that the religious authorities decided to question him openly about his identity.

The Evangelist had already made clear in his prologue who John the Baptist was. He was “a man sent from God” who “came for testimony, to bear witness to the light, that all might believe through him.” The questions addressed to him reflect the widespread belief that Elijah would come just before the arrival of the Messiah. Later Jesus will tell his disciples that in fact John could indeed be viewed as Elijah (cf. Mt 17:12).

But despite his great prestige among the people, John immediately cuts short any attempt to make himself the center of attention. The Baptist with his own example preached the need to be deeply humble, a quality he demanded of those listening to him and that continues to be a call to us today. As Saint Josemaria said: “We certainly need to convert anew, to be more fully loyal and more deeply humble, so that our selfishness decreases and Christ can grow in us. For illum oportet crescere, me autem minui, “he must increase and I must decrease.”[1]

Reflecting on this time of Advent and the Gospel for today, we can recall the triumphal “advent” or entry of the Roman emperors into the City, accompanied by a whole cohort of servants and even a procession of defeated enemies. In contrast, our Lord’s “advent” or arrival in Bethlehem was discreet and humble. And when, near the end of his life, he entered Jerusalem to the acclaim of the people, he was mounted on a donkey.

That same discreet arrival of our Lord takes place now in the Eucharist, in our daily duties, and in our neighbor’s needs. Faced with these repeated “advents” of our Lord, we run the risk of letting our pride hide Him from us, leaving no room for Him in our daily schedule and concerns. The liturgical time of Advent invites us, through John the Baptist’s voice crying out in the wilderness, to a new conversion and a demanding preparation for our Lord’s arrival.

At the same time, the liturgy reminds us that letting Christ grow in us does not make us smaller or sadden us. Rather just as the Baptist was filled with joy when he saw the Messiah arrive, so should our own joy increase during these days. Benedict XVI told us: “The liturgy of this Sunday, known as Gaudete Sunday, is a special invitation to be joyful, to a vigilance that is not sad but happy. True joy is not merely a passing state of mind or something that can be achieved with one’s own effort; rather it is a gift, born from the encounter with the living Person of Jesus and, making room within ourselves, from welcoming the Holy Spirit who guides our lives. In this Season of Advent let us reinforce our conviction that the Lord has come among us and ceaselessly renews his comforting, loving and joyful presence.

“Let us entrust our journey to the Immaculate Virgin, whose spirit rejoices in God our Saviour. May Mary guide our hearts in joyful expectation of the coming of Jesus, an expectation full of prayer and good works.”[2]