The Church celebrates the Nativity of our Lady on September 8th. Second in the series of reflections on the Life of Mary. 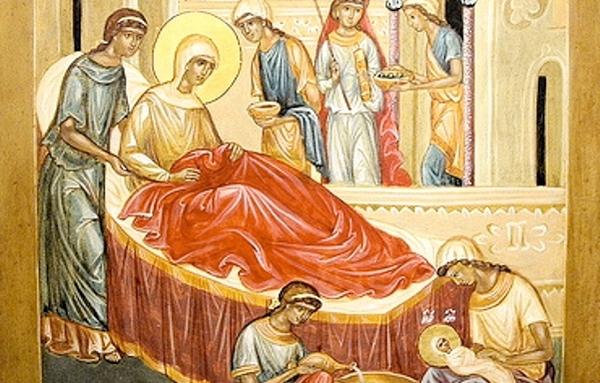 Many centuries had passed since God promised our first parents, at the gates of Paradise, the coming of a Messiah. Throughout those centuries the people of Israel kept alive the hope of that divine promise, centered on a maiden from the House of David, who will conceive and bring forth a Son who will be called Emmanuel, which means 'God with us' (Is 7:14). Generation after generation, devout Israelites looked forward to the birth of the Mother of the Messiah, who would bring him forth , as Micah said on the basis of the prophecy of Isaiah (cf. Mi 5:2).

After the return from the Babylonian captivity, the messianic expectation became more intense in Israel. A wave of emotion coursed through that land in the years immediately prior to the Christian era. Many of the old prophecies seemed to point to the Messiah's coming. Men and women eagerly awaited the Desired of the nations. The Holy Spirit had made known to the old man Simeon that he would not die until he had seen the realization of the promise (Lk 2:26). Anna, a widow of advanced age, fasted and prayed for the redemption of Israel. These two people would have the immense privilege of seeing the Child Jesus and holding Him in their arms (Lk 2:25-38).

Even in the pagan world (as some narratives from ancient Rome attested) signs were present that something very great was imminent. The "Pax Romana" itself, the universal peace proclaimed by the Emperor Octavius Augustus, a few years before our Lord's birth, was a harbinger that the true Prince of Peace was about to come into this world. The time was ripe to receive the Savior.

God put great care into selecting his Daughter, Spouse, and Mother. And the holy Virgin, the most exalted of women, the creature best loved by God, conceived without original sin, came into our world.

In the fullness of time, God sent his Son, born of a woman, born under the Law, to redeem those who were under the Law, that they might receive adoption as sons (Gal 4:4-5). God put great care into selecting his Daughter, Spouse, and Mother. And the holy Virgin, the most exalted of women, the creature best loved by God, conceived without original sin, came into our world. She was born amid a deep silence. It was autumn, when the fields are ready for sleep. No one living at that time was aware of what was happening. Only the angels in heaven rejoiced.

Of the two genealogies for Christ that appear in the Gospel, the one recorded by St. Luke is most likely Mary's. We know that she was of illustrious lineage, a descendant of David, as the prophet had said when speaking of the Messiah: A shoot shall spring from the stump of Jesse, and from his roots a bud shall blossom (Is 11:1). And St. Paul, when he writes to the Romans, says that Christ was born of the line of David according to the flesh (Rom 1:3).

An apocryphal writing from the second century known as the Protoevangelium of James tells us the names of her parents, Joachim and Anne, whom the Church has inscribed in the liturgical calendar. Various traditions locate Mary's birthplace in Galilee or, what is more likely, in the holy city of Jerusalem, where ruins of a Byzantine basilica from the fifth century have been found, built over what was called "the house of St. Anne," very near the Probatic Pool. Rightly does the liturgy place on the lips of Mary some phrases from the Old Testament: He established me in Sion. In the beloved city he gave me a resting place, and in Jerusalem was my dominion (Sir 24:11-12).

Prior to Mary's birth, the earth was in darkness, wrapped in the shadows of sin. With her birth the dawn of salvation arose, as a herald of the coming day. As the Church prays on the feast of our Lady's Nativity: "By your birth, O Virgin Mother of God, you bring joy to the whole world; of you was born the Sun of Justice, Christ, our God" (Office of Lauds).

But the world was still unaware of it. The earth was sleeping.