This is the story of a young boy in Nairobi, who we shall call Thomas, who fought against the evil coronavirus in his very own home. 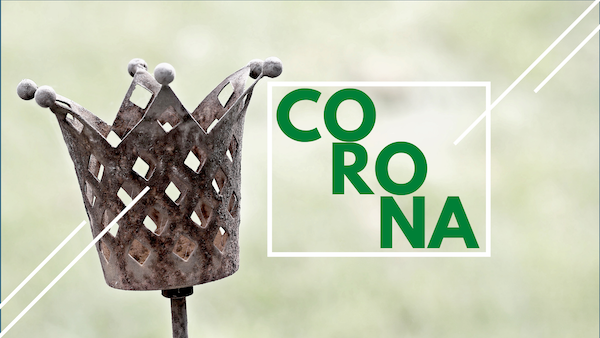 Thomas thought that the virus was winning because it was a king. I mean, it was called CORONA virus, wasn’t it? He looked in the internet and he realized that Corona means "crown" in Spanish. He felt like taking the king’s crown and smashing it, just like he would with a nasty, ugly virus!

Thomas sat there working out how he was going to take that sticky, dirty crown from that nasty bug. But what could he do to win such a battle in his own house? One day, it dawned on him.C O R O N A: He would strip away each and every one of the letters from its crown, turning it into a sad, weak virus.

C: “It’s so difficult to do something that begins with C that could counteract the Calamities of the virus!” thought Thomas one day. So, he decided to save that letter for last and he carried on to the next one.

O: This one seemed easier. He made a plan to Obey everything his parents told him. He got down to work, and though it was as hard as ever, he was able to obey his parents better and help out around the house, make his bed, turn off the lights, even put down his mobile. In that way, he beat the Orror that the virus instilled in him.

Well, dear readers, you have surely realized by now that our hero was not the best at spelling because horror begins with an H. Maybe he's younger than we originally thought, or needs a private tutor, or maybe he just needs to read more…

Once he was able to take the O away, he attacked the R.This one was easy! He only needed to Pray and make a Request. He had seen the Pope a few times on TV, so he knew that praying would work. Besides, he had seen his grandfather pray the Rosary to the Virgin Mary every day. He would join in with his grandfather when he remembered the words. The prayer was very long, but Thomas did his best to keep up with him. That’s how he was able to take the R for Repulsive and Repugnant away from that evil virus.

He went on with the next O. He remembered that his mom would constantly tell him “Thomas, organize your bedroom, pick up your toys, fold your clothes, don’t drop them on the floor, put your shoes away into the closet. He made up his mind to be Organized. It wasn’t as easy as he thought, but when he finally saw the clean floor of his bedroom, he knew he had beaten the O of that Odious, invisible bug.

To beat the N for Nasty and Naughty, words that he often heard his parents and his grandfather say, he came up with Not telling lies. His siblings constantly blamed him for the mischief that went on at home. He had fun making them angry because he was bored. Since he was determined to tell the truth, he admitted his wrongdoings and ended up being punished more often than his siblings. This is how he wiped out the N completely.

The A was a piece of cake. A stands for Amigos, the perfect Allies in this war. Talking to his closest friends, calling to see how they are, playing online games with them. This is how he overcame the Anguish, which was another word he heard his parents say when they talked on the phone or watched TV. They would also say Fear a lot.

Thomas still didn’t know how he was going to get rid of the C, the only letter that was left. One day his grandfather got sick and was taken to the hospital. After a couple of weeks, his mother hugged him tight and told him that his grandfather’s heart had stopped and that he had gone to heaven. That day Thomas was very sad and didn’t want to eat anything.

The next day, he realized how he was going to beat the C. He would do it with Courage and Heart, with the same courage and heart that his grandfather had. He would always tell Thomas while he was praying the Rosary, “Ask the Virgin to bless you with a good heart, one that is forgiving like her own.” Thomas defeated the virus that had caused such calamities and finally won the war. Happily, he told the story to his family and friends. Inspired, they also acted in similar ways, together defeating the virus in a glorious final victory.