On 6th of March this year, Strathmore celebrated 60 years since it first opened its doors so many years back. Below we copy out Part 2 of some memories from the institution's first principal, Prof. David Sperling that he penned on the occasion of the 25th anniversary. 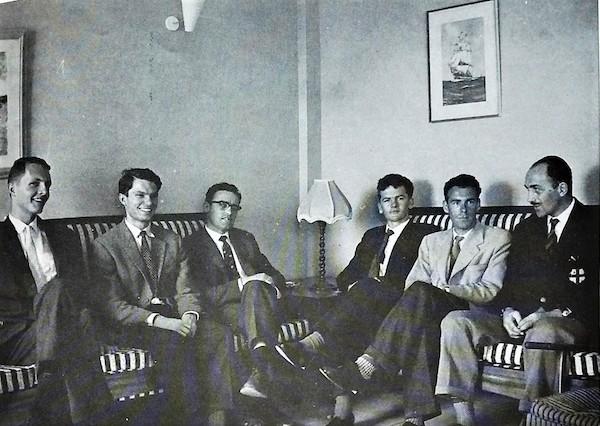 By the beginning of September, the staff was complete. Thinking back, it was providential that among us (eight teachers in all) were represented the educational traditions of three different English-speaking countries, Ireland, Great Britain and the United States. This ensured a variety of educational backgrounds and methods, and enabled us to broaden our approach through the continual exchange of experience. Early in 1961 we held the first of many "teachers' courses" over a long week-end. During that time we had many fruitful discussions about what was going well, and what wasn't and about our immediate and long-range goals, and how to achieve them. Perhaps more importantly we moulded a unity of minds and hearts which held us in good stead for the ensuing years. We knew that without the help and co-operation of many people who shared our ideals we could achieve little.

Until the 4-storey Block was completed in 1961, I worked as Principal from my 'office' at home. I well remember typing all my letters on a then-modern Facit typewriter (which can still be found around the College, now relegated to the status of a machine for typing envelopes). I was lucky to have learned to type early in my academic career, and typing actually speeded up my work.

Since the College began to receive grants-in-aid in October 1960, there were official financial and staffing returns to be filled up long before the first students actually arrived. The multi-racial character of the College posed some administrative and legal problems to the Colonial government, since there were different grant-in-aid rules for the three separate categories of schools, European, Asian and African. We fitted into none of the categories. This usually meant that the standard mimeographed Government forms were ill-adapted to the actual situation of the College, and I would invariably end up crossing out certain parts or words, or writing in extra information on the forms, as required, to give a true picture of our exceptional status. I enjoyed doing this.

Beginning in August, 1960, I took up correspondence with the teaching staff recruited in the U.K. I had a long exchange of letters with David Hogg, who was coming to teach Chemistry and to head up the Science Department, about textbooks, equipment, syllabuses, and Library books. This was extremely useful, as he in turn was able to do much groundwork overseas before actually arriving in Kenya.

Other even more basic items needed to be acquired, such as desks and chairs. The standard individual school desk seemed too small for the young men who would enter Form 5 in 1961, and we decided on a more 'mature' model, the long-standing Strathmore desk, shared by two persons, with accompanying wooden chairs with seats of different colours (blue, green, red and brown). Generations of Sixth Form and Accountancy students have sat at these comfortable and sturdily built desks, many of which are still in service. Only later were these two-man desks (which came to be known as D2's) supplemented by longer, narrower desks for four students (D4's). With the arrival of smaller Form 1 students in 1977, a more standard original-design D1 desk was introduced.

In the third term of 1960 we began extensive trips to interview applicants at various Form 4 schools scattered throughout the country. These trips provided an exciting introduction to parts of the country which I had not known until then, and left a deep impression on me of Kenya's spectacular variety and potential. It was a chance, too, to see the educational system at its grass-roots, and to publicize Strathmore which was then totally unknown. Indeed, most of the first applicants are to be commended for their act of faith in applying to an institution which did not yet exist. 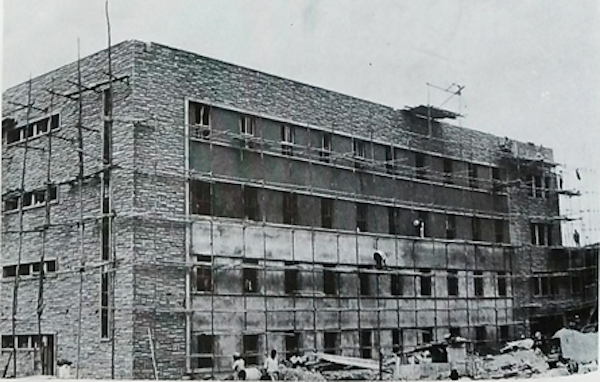 Towards the end of 1960, the 4-storey Block had begun to rise above the ground. By the end of October, in fact even before, it was clear that; we did not have enough funds to pay the contractor for the first building. In spite of the capital grant of £40,000 from the Colonial government and mortgaging the land and buildings, there was still a sizeable shortfall needed to complete this frist stage of construction. We also faced the prospect of a large recurrent deficit, as we were determined that no student was to be excluded because of inability to pay fees, and that we should offer bursaries to all deserving applicants.

In mid-November I left on what was to be the first of numerous fundraising trips abroad, leaving Kevin O'Byrne as Acting Principal to carry on with all the necessary preparations. At this point I should like to recall that the generous help of many persons made the development of the College possible, and to record, on behalf of all the early staff and students, our gratitude to some of the College's major benefactors, the Ford Foundation (which offered 75 bursaries during the first three years), the German people (through Zentralstelle fur Entwicklungshilfe), the Government of Switzerland (which also gave a large number of bursaries) and Charles Merrill (Chairman of the Merrill Trust), who began helping Strathmore in November, 1960, and has continued to do so until today. Frank Sutton, the Ford Foundation representative in Nairobi, had taken a keen interest in the College, and continued to do so until he retired as Vice-President (for International Affairs) of the Foundation. The Ford Foundation gave a second grant to Strathmore in 1965 for the expansion of facilities to accommodate the School of Accountancy. It would be correct to say that without the support of all these people, many of our plans could not have been fulfilled.

We had already decided that students would live in study-bedroom dormitories for five persons. Five seemed the ideal number, as it was large enough to allow some economy of space, and small enough to create a more intimate family environment than would have been the case with larger open dormitories. As students soon learned from experience, they would inevitably find themselves in a room with four others from different schools and different parts of the country or world. These living arrangements undoubtedly helped to foster our goal of unity out of diversity, and went a long way to breaking down any initial reserve or tendency on the part of the students to stick with others from their own school or area.

One aspect of College life which occupied our attention in planning was the question of diet. If the well-known military adage, "An army marches on its stomach", is true, the same can be said analogously about boarding students. There were to be students of all races and from all parts of Kenya. One well-wisher even suggested to me, quite seriously, that we would have to provide at least three separate diets! That, of course, was out of the question, and we settled for a varied mixed diet (with an emphasis on nutrition), which proved popular with most.

The months of January and February passed quickly, too quickly it seemed. The opening date had been fixed well in advance, so our target was clear. As soon as part of the 4-storey Block was completed by the contractor, we would begin moving in furniture and equipment. I moved my office to room 27 on the 2nd floor of the Residence (from where it then moved to Room 10 in the Academic Building, once the construction of that building was complete in January 1962). We set up the Library in room 16, on the 1st floor of the Residence opposite the entrance to the dining-hall, and moved in bookshelves and books. The temporary science labs were fitted out, and desks and chairs set up in the class-rooms on the first and second floors. All the various smaller items needed, from chalk to paper-clips, were stocked and stored. Meanwhile construction went on, and we learned to co-exist with the contractor as he went about his work. 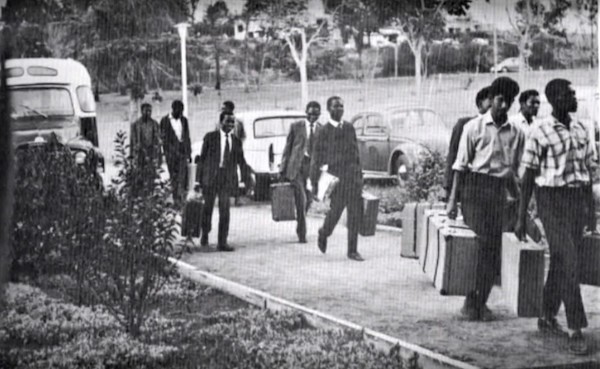 Then one morning it was March 6, 1961. The first boarding students had arrived the day before, and classes were about to start. After many months of preparatory work, with God's help, we were ready. The adventure was beginning.