Luckily, We Had You Here

Msgr. Robert Lozano (1932-2020), a Mexican, spent more than three decades in Africa. Most of those years were spent working and serving in Nigeria. But he also spent several fruitful years in Kenya where among other things he made the design drawings for St. Paul's University Chapel back in 1969. Msgr. Ignatius G. Sotos sheds light on the personality of Fr. Robert who passed away recently. 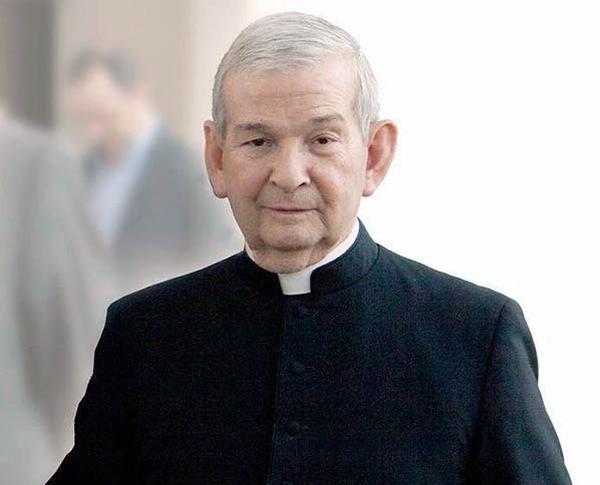 Just a few days after landing in Lagos in August 1981, I realized how much work and dedication had been required of the members of the Work who were then living there to build Helmbridge Study Centre, which had been completed in May 1976. I was aware of the development of the apostolate at Ibadan –the cradle of the beginnings of Opus Dei in Nigeria, since 1965–, and it was very glaring to me the great impact that the arrival of Fr. Robert had, since he arrived in December 1971. His coming from Kenya -where he worked for some years- to become the Regional Vicar had been like a blessing. Still another blessing came from Nairobi a few months later, when the women of Opus Dei landed in Lagos on the 7th November 1972 bringing a cake for the celebration of the 40th birthday of Fr. Robert.

Since I first met Fr. Robert, on my arrival in Nigeria, I was struck by the liveliness of his eyes, his poise and his simple sense of humour. Once St. Josemaría had remarked in a fatherly way to him that he was short in stature, and Fr. Robert had wittily answered: “Yes, Father, I am small but well-proportioned.” St. Josemaría laughed heartily at this reply which years later was often repeated among us like a legend. He was able to prove over the years how much truth there was in this sharp improvised sentence.

The apostolate progressed steadily at the pace of his dreams, and those of us collaborating with him, in different cities: Lagos, Ibadan, Enugu and Benin City. Youth clubs helping families in the education of their children, residences for university students, courses on management for professionals, family schools and the seeds of other educational projects, among others, were ventures that eventually were started with the purpose of helping the country. 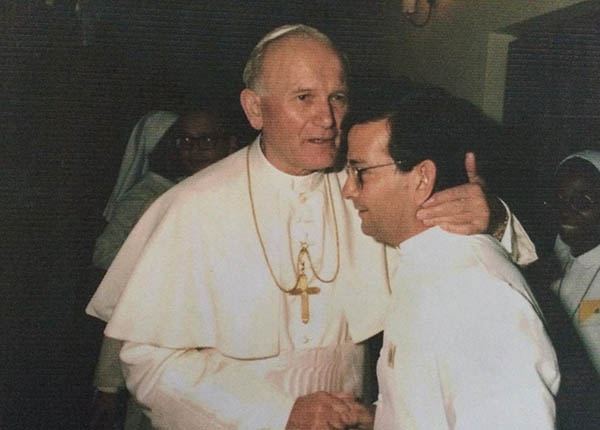 In 1982 and 1997, thanks to his frequent contacts with the Nuncio –who at that time lived in Lagos- he was able to help effectively during the stays of Saint John Paul II in Nigeria when, among other things, the Holy Father opened the Nuntiature in Abuja and performed the ceremony of beatification of Fr. Michael Cyprian Iwene Tansi.

In November 1989 there was the first trip of the Father to Nigeria. Blessed Alvaro del Portillo visited all the cities in which there was permanent apostolic work and Fr. Robert was delighted. Don Alvaro was able to appreciate personally how much work was being done by living in the Centre of Commission in Victoria Island and in Iroto Conference Centre (Ijebu-Ode) where, in a peaceful moment in the evening, when I was present, he told Fr. Robert: “Luckily, we had you here” [menos mal que te hemos tenido a tí aquí]. I have never forgotten and consider this sentence literal.

Don Alvaro and Fr. Robert dreamt of the future after consecrating the altar of the oratory of Irawo Hall of Residence in a trip to and fro from Iroto to Ibadan. He had also a meeting with Benin people, who had been participating in activities of formation since 1986, and wanted the Work to start Centres in their city, before spending two days at the other side of the River Niger. New projects were born, like the new Centre in Nsukka, Uhere, close to the University of Nigeria; the Blessed Sacrament was reserved in it in January 1992. I remember the great joy that Fr. Robert and I had a couple of months later when, coming out from the house of the Bishop of Enugu, a priest from Nsukka stopped us from his car. He was taking to Enugu two letters from the Bishop of Nsukka: one for the Vicar and a copy to me. We thanked, departed, and in the very street we stopped to read the letters: original and copy granting in writing the permission for the Centre. It was the evening of St. Joseph’s Feast. 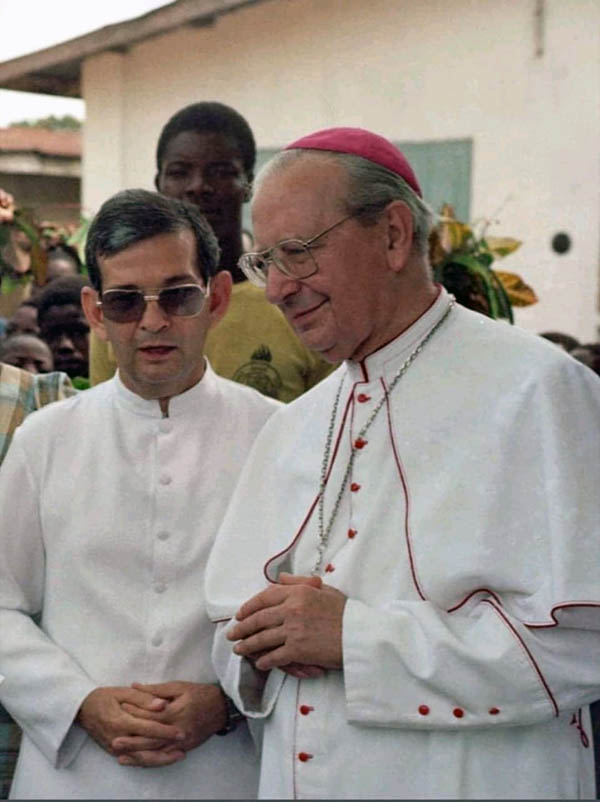 But the greatest impact of the Father’s trip came from the suggestion of Don Alvaro to some doctors who were working at Enugu, to remember the initiative of Monkole (Congo), where a Hospital, personal work of apostolate, had started. Once the idea was bought by them, Fr. Robert entrusted to me personally many of the preparations. He wanted the project to be the model of all hospitals to be, due to the quality and expertise of the doctors, their humanity, but also to the small details of construction and maintenance, which were really his special area of expertise, as he was an architect by civil profession. I blessed in Enugu, in the evening of the 2nd October 1993, the temporary premises of Niger Foundation Hospital and Diagnostic Centre in a simple way. The opening took place on the 4th October 1993.

Blessed Alvaro’s trip had also a significant influence in Lagos, where he offered encouragement for the possible project of a Lagos Business School. And Fr. Robert not only dreamt with Don Alvaro and the others listening to him. He supported the plans effectively: the cooperation of Fr. Robert’s friends and his ability to put them to work together was obviously very necessary and somehow omnipresent in the beginning of that project.

Yes, “small but well-proportioned”. He became Monsignor in 1994. An honorific appointment to continue working silently and happily. The condolence message that Cardinal Okogie sent after the news of Fr. Robert’s death means a lot: “Accept my belated condolence. How I wish I were strong enough to be beside him before he signed off this mortal world? May his gentle, loving and peaceful soul rest in Our Lady’s hands. Amen. We will meet again beloved Priest of the Most High”.

Tennis was his favourite game: a weekly game for resting. I am grateful for his determination to keep to this in spite of the usual pressures of work and ailments. He had to reduce its practice when he had a domestic accident that affected his spinal cord after lifting a weight too heavy for him, and that required, later on, surgery. Other health issues, which he always handled with great serenity were present -intestinal problems, a bleeding ulcer- and were only finally solved when he returned back to Mexico.

When, in 1994, I came to Lagos to work more closely with Fr. Robert, I continued learning from his being so “well-proportioned” in the many aspects of the development of the apostolate. He wanted parents to start some educational projects for the benefit of all in the country. His ability to negotiate at different levels with the authorities, also to get land allocated for those projects of public interest, was very remarkable.

The Father came to Nigeria a second time in April 1999. This time the trip of Don Javier Echevarría, who came also in 1989, was a revolution for the apostolic work. Fr. Robert was able to accompany him to visit all the new developments and sites for promising future projects. One was the transformation of the Lagos Business School into a University which, by chance, was approved on 9 January 2002, the centenary of the birth of St. Josemaría. Another was the idea, cherished by both of them, of having the headquarters of Opus Dei in Nigeria in adjacent buildings, with the necessary guarantees of separation between the sections of women and men, to facilitate the direction of the apostolate.

On one occasion the Father was talking with Fr. Robert in his office in Victoria Island Centre. I was supposed to take something inside the room. Don Javier told me to stay and follow the trend of the conversation. Fr. Robert was commenting how many times you feel as if many important matters are hanging from small screws at the wall of the room; and that, at any moment, they could fall into pieces. The Father replied that: “For us, children of God, that feeling should not be devastating, because we go to Him to give us the fortitude and wisdom we need”. I think this is a fully literal sentence.

Fr. Robert was given other assignments in 2002 that meant he had to divide his time between Nigeria, Kenya, South Africa and Rome. In 2006 he returned to Mexico and lived his last years in Guadalajara, the same city where he himself had started the apostolic work. He manifested many times that he wanted to dedicate a lot of time to hearing Confessions and it seems his desire came true. There was no complaint on his lips in his last words in the Murtala Muhammed Airport. Only a prayer. That we are faithful, learning from our Father the spirit of the Work, and an expression of determination: “usque ad finem” [till the end]. 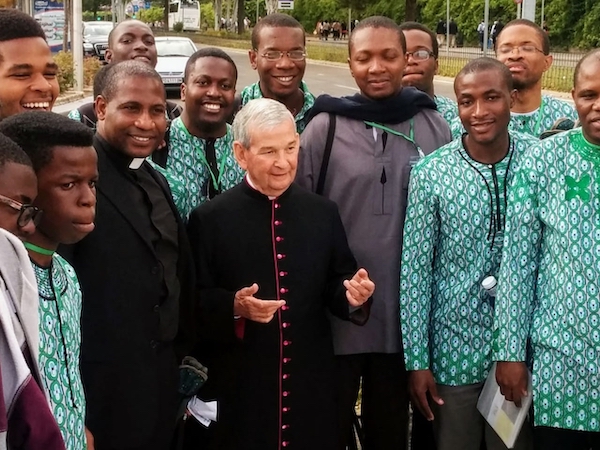 Every time he received news from Nigeria and other African countries his countenance and his voice reflected a deep pride: “they are many, they are many. They are so young”. The night before his death he spent the get together with Mexicans telling stories from the beginnings in Kenya and Nigeria, remembering persons. He had us in his heart. The Director had to insist three times that it was time to go to sleep and rest; the third time he stood up so that the participants did not insist that he continued telling them more stories.

Two days earlier, the Director of the annual course had met Fr. Robert, who told him: “Thank you for everything”. The Director showed perplexity and Fr. Robert continued what he wanted to say: “God is already calling me…”. He told the same to another person on the following day: he was waiting, expecting his departure, which he felt very close. He died with Africa in his heart.