Last year, as Strathmore University's Class of 2020 geared up for an unusual graduation ceremony amidst the pandemic, Andrew Angatia took his first steps on an unconventional yet fulfilling path: He joined Our Lady of Angels, the formation house in Meru to follow a calling that will lead up to the profession of solemn vows as a Franciscan friar and to the priesthood, 11 years from now. 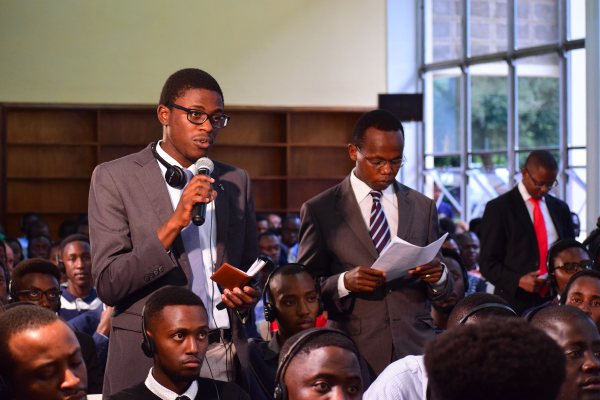 Andrew asking the Father, Don Fernando, a question on vocation during the get-together for young people in Strathmore School on 17th Dec 2019

Last year, as Strathmore University's Class of 2020 geared up for an unusual graduation ceremony amidst the pandemic, Andrew Angatia took his first steps on an unconventional yet fulfilling path: He joined Our Lady of Angels, the formation house in Meru to follow a calling that will lead up to the profession of solemn vows as a Franciscan friar and to the priesthood, 11 years from now.

This decade long journey began a few years ago when the idea of a celibate vocation first stirred in his heart. He joined Strathmore in 2016 to begin the CPA course and graduated last year in December among the top of his class with a Bachelor of Commerce first class honours degree (double major finance and management science option). When word got out that this was the path he has chosen, different reactions met him: awe, wonder, dismay, shock. Why would he embark on this path, when seemingly, that of a corporate life was ready to beckon him towards it?

“When the thought first crossed my mind, I battled with the idea of a celibate vocation. We are all wired towards looking at our vocation as one to marriage and when I saw that God was asking me to give everything to him, I was reluctant for a while before accepting that ultimately, this is what will give me joy. It was out of fear, but prayer cast those fears away.”

The next step involved discerning which order or congregation to join. “My mentor and spiritual director guided me through it and helped me realise that each person has his/her own unique vocation. I fell in love with St. Francis and his charism.”

The Franciscan order was founded in the early 13th century by St. Francis of Assisi, well known for his prayer, Lord make me an instrument of your peace.

Brother Peter Tabichi put the Franciscans in the limelight after being named the 2019 Winner of the Global Teacher Prize from the Varkey Foundation. He belongs to the OFM. Andrew, on the other hand, will be joining the Conventual Franciscan Friars, well known as the friars in charge of Subukia Shrine. A distinctive mark is in their habits (religious clothing worn by members of a religious order); the OFM and OFM Cap wear a brown one while the conventuals do a grey or black one.

Growing up, this idea never crossed his mind. Once he made up his mind, he went to the St. Catherine of Alexandria, South C parish, run by the Conventuals, to see the vocations director. “Coincidentally, I went to see him on a day of ordinations. He listened to me but encouraged me to go back to complete my degree as it was an important stage that might come in handy later in life. I was in third year at this point.”

After completing his degree programme, he spent time in the formation house in the come and see programme. “Here I learnt more about their way of life, what to expect. It also helped to seek clarity on the questions I had in mind and interact with them so that I could make an informed decision.”

He completed the last of his CPAs while in the formation house. “I was amazed to discover that the inventor of the double entry accounting system was a Fransiscan friar! The knowledge I have acquired in finance and accounting is an added advantage. It will come in handy in the event that I am asked to oversee projects run by the order.”

He is now going through a two-year period of orientation to Franciscan life and spirituality (postulancy), after which he will enter the novitiate which begins with the profession of temporary vows and the reception of the habit; this stage marks the formal entrance into the Order. He will then undertake three years of studies in Philosophy, in Zambia or Poland, followed by one year of pastoral work back in his home country. The last stage of formation involves four years of theology, with the studies undertaken either here in Kenya, Italy or Poland. After a minimum of eleven years, he will be eligible for the profession of solemn vows: vows of obedience, to live without anything of one’s own and chastity. At this stage, friars either remain as brothers or are ordained as deacons, eventually to become priests.

“So far so good. I frowned upon the siesta that is allocated in the timetable in the afternoons but after a while, I realized it comes in handy when there is need for recuperation. There is quite a large amount of physical activities involved in our daily activities and if you don’t watch out, you will be falling asleep during the common recreation period at night!”

This article is written by W.G.

This article first appeared on the Strathmore University website here.