Renewing the Enthusiasm of a Tired World

In a ceremony uniting modernity and tradition held at the school’s Contemporary Art Museum, the University of Navarra awarded its highest academic distinction to four scholars.

For the first time, the current Prelate of Opus Dei and the University Chancellor, Monsignor Fernando Ocáriz, presided over the event. About 700 people filled the museum's theater space, designed by one of the day’s honorees, the architect and Navarre-native Rafael Moneo.

Since 1964, the University of Navarra has awarded 39 honorary doctorates for outstanding academic and professional contributions in various fields. Recipients include the former Cardinal Joseph Ratzinger, who was honored in 1998 and who delivered this address in Spanish for the occasion.

Hispanic scholar and professor at the Hebrew University of Jerusalem, Ruth Fine, an expert in the Spanish Golden Age, expressed her gratitude for the award and highlighted the need to build bridges of intercultural dialogue between the Hispanic and Hebrew worlds.

Robert Picard, an expert in media company management and a professor at several different academic centers, said that "communication is essential for building healthy societies," and that "institutions of communication should serve the needs of everyone."

British sociologist Margaret S. Archer, a pioneer in her field and internationally recognized for her academic work, stressed the importance of the contribution from social sciences for the creation of more just environments, an objective that in her opinion is not assisted by the "painfully weak" relationship between these sciences and their philosophical foundations.

Spanish architect Rafael Moneo is the holder of outstanding awards in his field, including the Pritzker Prize (1996), Prince of Asturias of the Arts (2012) and National Prize of Architecture in Spain (2015). He dedicated a good part of his speech to thanking the University of Navarra for all it has done since its beginnings in 1952, and especially his School of Architecture. 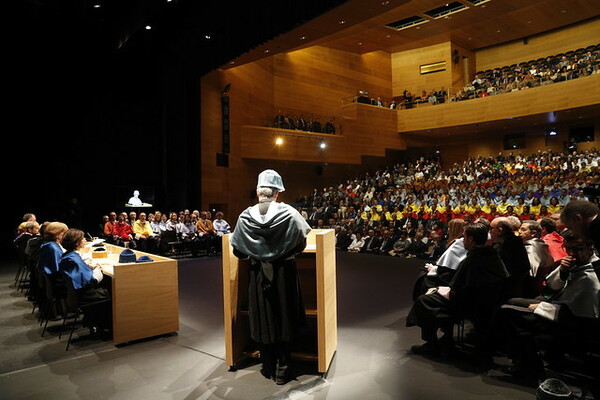 According to Moneo, "Pamplona has been transformed by the presence of this University, along with the more recent state University. Thanks to them, it is a much more alive, happy, open, trusting, and prosperous city today... I would like to show my gratitude for this honoris causa doctorate that honors me as an architect and that right now makes me feel like the happiest person alive."

Monsignor Fernando Ocáriz: Universities as beacons that provide light for the world

In his closing speech, the University Chancellor, Monsignor Fernando Ocáriz, made reference to one of his predecessors, Blessed Alvaro del Portillo. "Twenty-five years ago, on a similar occasion, Bishop del Portillo invited teachers and students to 'undertake the adventure of renewing the enthusiasm of a tired world.'"

Although many people say that these are times of "crisis and uncertainty," he encouraged them to seek ways to improve the world through "authentic education and the transformative power of people who think for themselves, not letting themselves be dominated by trends, who set the course for their own lives and find meaning there: being, as Pope Francis puts it in Evangelii Gaudium, not ‘drifters’ but ‘pilgrims’.” Then a university "will become a beacon that, by searching for the truth, provides light for the world."

Describing the personality of the first rector of the University of Navarra, Ismael Sánchez Bella, Ocáriz highlighted the importance of grounding the university’s activity on its Christian identity. "Seeking peace, promoting social justice, or caring for our common home are sustained and strengthened through an understanding of the world and the person grounded in the Gospel." This is how universities can become wellsprings of freedom and hope, Ocáriz said.


At the end of the ceremony, the new doctors and their families greeted those in attendance. In the afternoon, Monsignor Ocáriz met with members of the university’s Rectorship, and later on, with directors of the University Hospital. He will spend a few more days in Pamplona before traveling to Barcelona, and from there begin a pastoral visit to the United States and Canada that will last over a month.