On 6th of March this year, Strathmore celebrated 60 years since it first opened its doors so many years back. Below we copy out some memories from the institution's first principal, Prof. David Sperling that he penned on the occasion of the 25th anniversary. 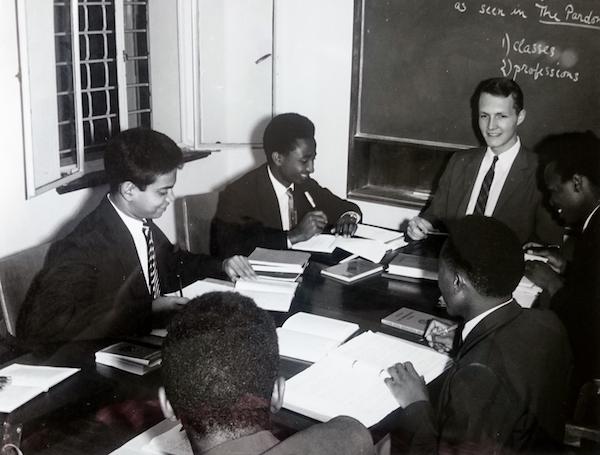 Prof. Sperling - 1st principal of Strathmore - in class with some students

My grandfather was a school Principal and my father a University professor. Ever since I can remember I have been interested in foreign peoples, lands and languages. When I found I had a chance to come to work setting up a College in Kenya, I didn't hesitate. I first set foot on Kenya soil, at Kilindini Harbour, on July 26, 1960. Looking back on my arrival, I consider myself fortunate to have come by sea. Moving along the coast of Northeast Africa, then Somalia and the Kenya coast, and finally inland by road to the interior of Kenya, I sensed and saw the vast breadth of Africa's land and culture. My travel through time and space gave me the chance to think and to adjust to what otherwise might simply have been a 'culture shock'. I felt very much at home from the moment I arrived.

The inspiration and spirit behind the College are described elsewhere in this book. Here I only wish to record some of the tasks which faced those of us who had taken on the challenge of starting Strathmore in the multi-faceted era of pre-independence Kenya. Some matters were quite ordinary and would have confronted anyone wanting to start an educational institution; other particular circumstances were unique and required special solutions.

Among my first official contacts I found myself dealing with officers of the British Colonial service. Fortunately I had spent some time in England on an exchange programme of the English-Speaking Union; one of my grandfathers was English, and I had numerous English 'cousins'. I still remember the remark of the kindly grey-haired officer in the Ministry of Education who interviewed me in August 1960, to approve my appointment as Principal of Strathmore. He looked at my Yale and Harvard degrees and said, with a friendly smile, "Well, I guess we can consider these the equivalent of a British degree."

What we really wanted was to do a good job, something of value to society and something worth offering to God, which would reflect the spirit of Opus Dei — the Work of God — as expressed in the words of Mgr Escriva: "We shall not attain our goal if we do not strive to finish our work well; if we do not sustain the effort we put in when we began our work with human and supernatural zeal; if we do not carry out our work as well as the best do and, if possible, even better than the best. And I think that if you and I really want to, we will work better than the best, because we will use all the honest means as well as the supernatural ones which are required in order to offer our Lord a perfect job of work, well finished and pleasing in every way.' 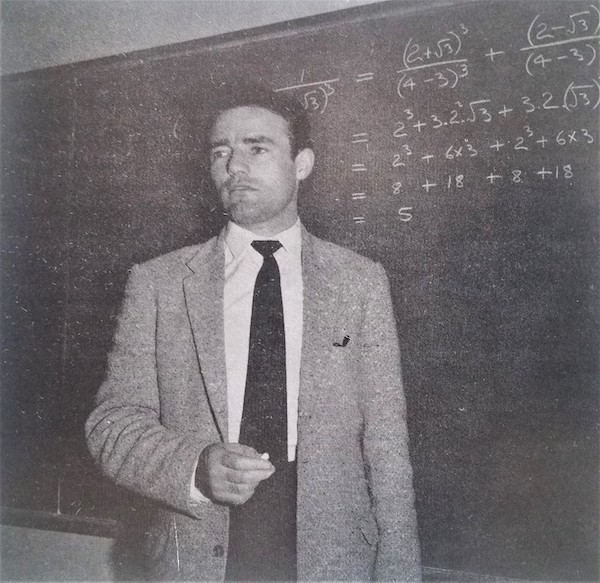 Kevin O'Byrne (pictured), who had been lecturing in the Engineering Department of the Royal Technical College, had been appointed Vice-Principal. As an engineer, he would teach Maths or Physics, and I could teach English or History, but we still needed to assemble a teaching team spanning the rest of the Arts and Science subjects, and to recruit administrative and auxiliary staff. Those of you who knew the College in the early 1960s will remember that Strathmore was a College "of Arts and Science". The title chosen was not a pretentious claim to be more than we were, but an attempt to show by name that Strathmore, with only Sixth Form classes, was not the usual secondary school, and that it was an academic, not a professional or technical, institution. There were those who deduced that we were planning to establish a University, but in fact we had our hands more than full with Sixth Form.


In our search for teaching staff we approached everyone we thought might be interested, or who might have contact with a possible teacher. For example, Michael Bennett (the first History teacher) was a close friend of John Kieran, then lecturing in History at the Royal Technical College. Michael gave the best years of his life to Strathmore before dying young of cancer in August, 1964. Even after death his contribution continued, as he donated his personal collection of history books to the library. 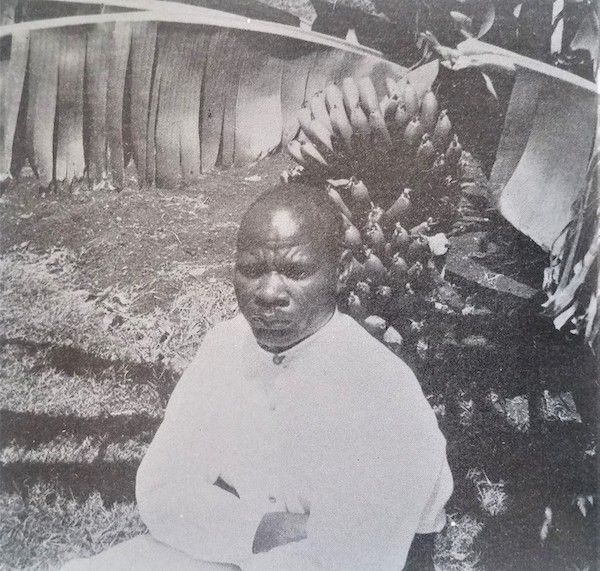 As it was, when classes started on March 6, 1961, we were still awaiting the arrival of two teachers. Meanwhile Kevin doubled up as a Maths and Physics teacher (this was possible because we only had Form 5 classes to begin with), and we recruited a part-time Geography teacher, John Pritchard, until Patrick Ferguson arrived. Beginning early in 1961, the first administrative and auxiliary staff were also recruited. Omuka and David Kirui (pictured - the first driver) both began to work for the College then. Festo, Peter Kinyanjui and others followed.