We were looking back on these “discoveries”: how we all separately learnt about this particular series of talks and what we’ve learnt from them in the last two years. 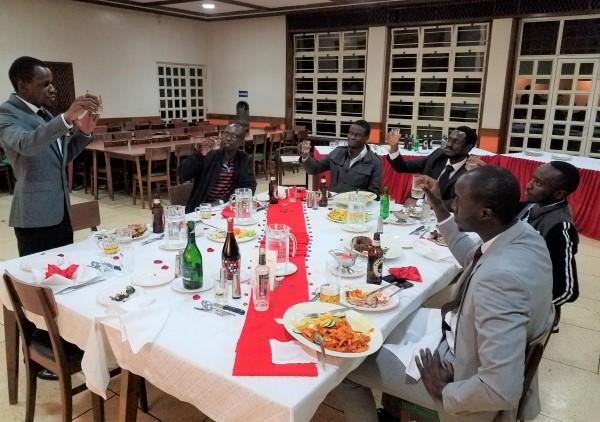 Dinner after one of the talks

“There was this girl I was dating those days who mentioned a retreat in Tigoni Study Centre… I was curious about it and pressed her for details…” This was Thuku sharing with us his story. A retreat and a couple of months later, he was attending the Manliness Project talks at Riverside Residence, a local university student’s residence for men.

Jude’s discovery came through a workshop he and his office colleagues were attending at Strathmore University Business School. “One of the speakers spoke so well and brought in the angle of human standards or human virtues. While in high school I had attended a few talks on these human virtues and I missed them! I had been looking for them since.” So after this speaker was done, I approached him to thank him and to ask him where I could get more on the human virtues.” A couple of emails later, Jude was attending the same talks, in the same place with other young professionals and a couple of university students.

Tony’s discovery was very similar to Maina’s: they’d kept in touch with their mentor from high school. After an exchange of a couple of WhatsApp messages when the series of talks was beginning, they too were attending the Manliness Project. They described it as their “weekly dose” where you get “beaten and battered spiritually speaking” and “reminded of the standards that are expected of a man’s man”. And more than a weekly dose, it was also like a “weekly fix” because “when you missed the talk on Thursday, the weekend would come and standards would drop, if you know what I mean.”

Kamau’s discovery was not too different. In his case though it was his high school football coach who had kept in touch. And whenever his demanding course in medicine and his Bible Study allowed, he too was a regular for the Manliness Project talks.

Clinton’s and Charles’ discoveries were courtesy of their mentors who recommended that they should attend that series since it had a good crowd of young professionals like themselves.

And what struck us most in the series? The answers I got from these young men were all quotations mentioned in one or other of the talks.

Thuku had three most memorable quotations:

“It is not necessary for a man to be actively bad in order to make a failure in life; simple inaction will accomplish it. Nature has everywhere written her protest against idleness; everything which ceases to struggle, which remains inactive, rapidly deteriorates. It is the struggle toward an ideal, the constant effort to get higher and further, which develops manhood and character.” (James Terry White)

This last one was also Charles’ most memorable quotation.

Jude’s was “Men like fish, are caught by the head.” (St. Catherine of Sienna)

Tony’s: "Heroism at work is to be found in finishing each task" (St. Josemaria Escriva)

Kamau picked up quite a number of ideas especially on professionalism, responsibility. And here he was rather fascinated with just how practical and efficient the Pareto Principle (the 80:20 Rule) could be in his work in the field of medicine. And his most memorable quotation? “A man who does not read has no advantage over one who can't read.” (Mark Twain)

Clinton also had this same quotation as his most memorable, especially thinking of it slightly tweaked to read “A man who doesn’t practice virtue has no advantage over one who has no virtue.”