With her Irish sense of humour

Helen Ryan passed away peacefully. She was a faithful friend she knew how to make life enjoyable with her Irish sense of humour.

On January 6, 2021, Helen Ryan passed away peacefully at Vancouver General Hospital. She had suffered a massive stroke five weeks earlier.

Helen was born in Dublin, Ireland on February 25, 1930. She loved animals and wanted to be a vet, but her mother encouraged her to study architecture instead. After completing her studies in architecture, she worked for some years in London, England, where she was introduced to Opus Dei through a friend. It was only some years later, though, after crossing the Atlantic to find work in Montreal, Canada, that she began attending formative activities offered by Opus Dei. This time, she was put in touch through a draftsman at her office. She asked to join Opus Dei in 1963, only a few years after apostolic work had begun in the country.

Working full-time in architectural firms, Helen collaborated in the construction and renovation of several centres of Opus Dei across the country. She was instrumental in building the hospitality training centre of the Manoir de Beaujeu, Canada’s first conference centre, in the early 70s. Two decades later, she worked on La Tourelle, an extension of the Manoir. While La Tourelle was being built, she moved into the Administration of the Manoir (the hospitality training centre), living that availability to always do whatever was necessary. One day the head of the construction company found her doing the dishes; he remarked that it was the first time he had seen the architect responsible for a project doing the dishes at home.

In 1982, Helen moved to Toronto to open the first centre of Opus Dei there. She continued to work as an architect and was loved and esteemed by her colleagues.

In 1997, after retiring, Helen moved to Vancouver to help start the first centre in Western Canada. She kept up an avid interest in her profession, and helped with the architectural needs of the Opus Dei centre in Vancouver: among other things, she designed the plans for a new oratory and oversaw other renovations. One could find her studying the blueprints of the house, which she herself made with a friend. 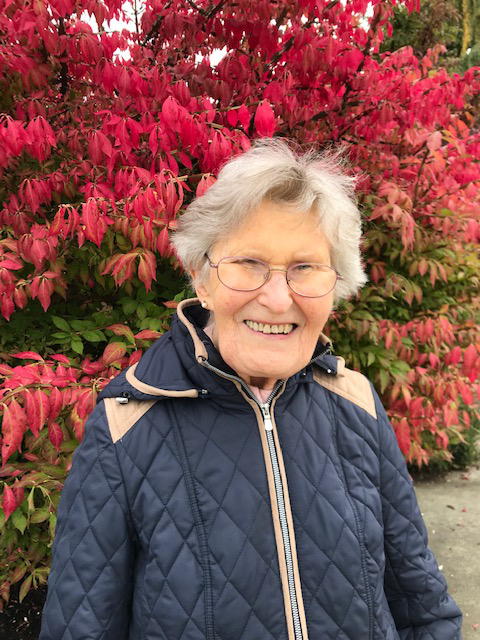 Helen was a faithful friend and kept up correspondences until her death. One of her colleagues in Toronto, who had also moved to Vancouver, came to visit Helen days before she passed away. She commented that Helen stood out for her constancy and loyalty. Helen’s god-daughter who lives in the U.S.A. called shortly after her godmother had a stroke, inquiring about her as she had not received a phone call from her in a while. Once informed about Helen’s stroke, she would call regularly for updates on her godmother. Helen’s sister-in-law and niece in Ireland also followed her illness and sent her audio messages while she was in the hospital.

Helen was always attentive to those around her and knew how to make life enjoyable with her Irish sense of humour. She could always come up with a witty response that made others laugh.

In the weeks she spent in the hospital, Helen cheerfully gave herself to her visitors and was faithful to her habitual life of prayer. Although in a lot of pain and discomfort, her good humour could still be noted in her gestures and facial expressions. Among her younger visitors were university and high school students, and a young nurse who used to read with her weekly at home. They left their visits impressed at her strength and serenity in the face of suffering.

Helen would wait until the sun came out to go for her daily stroll. On the afternoon of January 6, 2021, while a radiant sun blazed and flooded her room with light, she took her final stroll and left us for heaven.