"Holiness is the most attractive face of the Church"

On April 30, the Pontifical University of the Holy Cross in Rome hosted a day of reflection on lay holiness, in the context of the upcoming beatification of Guadalupe Ortiz de Landázuri. 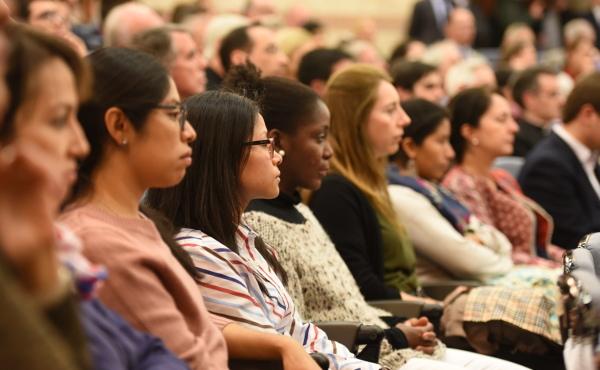 
Monsignor Fernando Ocáriz, Prelate of Opus Dei, introduced the day's reflections. Referring to these seven lay men and women, he said that "in their lives, we find so many common traits that stem from their identification with Christ. I am thinking especially of their love for the Eucharist, their peaceful acceptance of illness, their selfless charity towards their neighbors, and their diligence in carrying out their duties of study and work." 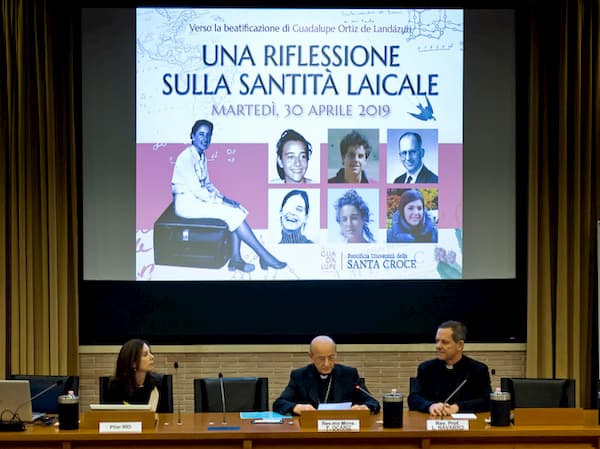 "Each new blessed or saint," the Prelate continued, "helps all of us Christians to increase our hope and to live with a deeper faithfulness to the Gospel. I am convinced that, with God's help, the upcoming beatification of Guadalupe Ortiz de Landázuri will be an occasion of grace, not only for those who seek her intercession but for all the faithful. It will be an opportunity to give thanks to God as we once again see how all the efforts of the Church are aimed at furthering the sanctification of mankind in Christ and God's glory."

Following Monsignor Ocáriz's introduction, Pilar Rio, Professor of Theology, offered some theological reflections on lay sanctity and its characteristics. “Observing the lives of these lay people, we can recognize some distinctive features of the 'profile' of holiness: it is an integral holiness that is lived in the company of others, in ordinary life--a holiness that is open as well as missionary."

"There is no such thing as first or second-class holiness, nor is there an elite holiness as opposed to a common holiness. We are all called, each on his or her own path, to a holiness that leads us to the perfection of our Heavenly Father."

"A girl like so many others." This is how Franz Coriasco, journalist, friend and biographer of the Italian Blessed Chiara Luce, defined his friend. Blessed Chiara found inspiration for her life in the exemplary life of Chiara Lubic, founder of the Focolare Movement. "Chiara was born at a time when people were starting to care more about how they appear instead of how they really are. Her illness did not initiate a change of direction in her life: it simply accelerated the process she had already started."

Federico Piana of Vatican Radio spoke about Venerable Carlo Acutis, an Italian student mentioned as an example in Pope Francis' latest Apostolic Exhortation Christus Vivit. "At Carlo's funeral, many young people that the family did not know, including non-believers and adherents of other creeds, came to pay their respects: these people were friends that Carlo had helped at some point. Carlo would go at night and accompany poor people, bringing them sleeping bags. 'Everyone is born as an original, but many people end up dying as photocopies' -- this was a favorite phrase of Carlo. Where did he get all this strength? From the Eucharist, which he called his 'highway' to Heaven."

The life of Argentine businessman Enrique Shaw was described by Silvia Correale, postulator of his canonization cause. "Enrique lived the virtues of patience and courage in the world of business. He understood the universal call to holiness. He was honest and competent in his family business, where he was always at the service of his workers. He was someone who transmitted the Church's Social Doctrine. He understood the unity that exists between economic well-being and evangelization. Enrique was against the culture of waste and also opposed speculation. He was keenly interested in the productive aspect of business. He loved his workers very much, and he spoke to them clearly, something that was not normal at the time. Enrique also had eight children and he passed on the faith to them."

Romano Gambalunga, postulator of the cause of Chiara Corbella, a young Roman woman, shared some thoughts about her: "The word that helps you understand some moments of Chiara's life is 'luminosity.' At one point she wrote, 'What God wants for us is much better than what we could ever have imagined.'" Chiara carried to term two very difficult pregnancies, and refused to have an abortion even though her life was at risk. Gambalunga explained how Chiara's faith wavered during a night of intense suffering in the hospital, but that she found strength in Christ's example. "It can happen to us too. Chiara lived her life, which was hers alone. But God makes himself known through the saints. Any one of us can come to know God and live out our own holiness, taking light from Chiara's example."


Antonio Riquelme, from the Neocatechumenal Way. spoke about the life of the Servant of God Marta Obregón Rodríguez, who is known as the "martyr of purity." "After a teenage crisis that led her away from the faith, Marta came to believe once more, with a lot of strength. She offered herself as a volunteer to do missions with the Neocatechumenal Way, but in the end she continued with her university studies. On her way home one day, Marta was kidnapped by a rapist who eventually left her on the side of a highway with 14 stab wounds, one of them in her heart. Marta refused her perpetrator with strength, striving to defend her life and integrity. Days before, she confided to a friend: 'I feel freer the more I abandon myself in the Lord.'"

"The cross of Jesus weighed more than my cross." This is what the young Angelica Tiraboschi told her father on their return from the hospital, after receiving the diagnosis of an aggressive breast tumor. Marcello, Angelica's father, spoke about how his daughter had learned to follow God's will in the Charismatic Renewal movement. "The cross will weigh on me; that's why I'll only ask you and mom to carry it for me from time to time." Marcello said his daughter "knew how to accept God's will, and she left us with the message of not wasting our time: we have to live in hope. The best is yet to come." Angelica died in 2015 at the age of 19.

The event closed out with a behind-the-scenes look at the preparations and initiatives underway for the beatification of Guadalupe Ortiz de Landázuri, who will become the first lay person of Opus Dei to be beatified this coming May 18th.

Carla Vasallo, member of the International Committee in charge of organizing Guadalupe's beatification, presented the life of Guadalupe and also commented on the events that will be held in Madrid. Gema Bellido and Juan Narbona described the efforts to make the beatification as accessible as possible through digital channels, while Rosalinda Corbi, international coordinator of Harambee Africa International, presented the Guadalupe Ortiz de Landázuri Scholarship Project, which will grant a total of one hundred research scholarships in the next ten years for women researchers in Africa, in memory of the new Blessed.

The beatification of Guadalupe will take place on May 18, 2019, at 11.00 am in the Palacio Vistalegre in Madrid, with a capacity for some 15,000 people. The ceremony will be celebrated by the Prefect of the Congregation for the Causes of Saints, Giovanni Angelo Becciu, and will be broadcast by several television stations as well as live-streamed on the Opus Dei website.

Guadalupe Ortiz de Landázuri was born in Madrid in 1916. She studied Chemistry at the Complutense University and went on to teach this subject in many schools and institutes, eventually doing a doctoral thesis on the properties of rice husks. Guadalupe balanced her professional career with the various jobs that the Founder of Opus Dei, Saint Josemaría Escrivá, entrusted to her in Spain, Mexico and Rome. Ortiz de Landázuri will be the third person of Opus Dei to be beatified, after the founder (who has also been canonized) and his first successor, Blessed Alvaro del Portillo. She is the first woman and the first lay person of this institution to reach the altars.