Dancing the Texas Two-step Towards the Faith

Courtney and Brian are Texans but until recently they lived in Spain, one of his professional assignments. Their love story began on a dance floor and has led them to places they never dreamed of. 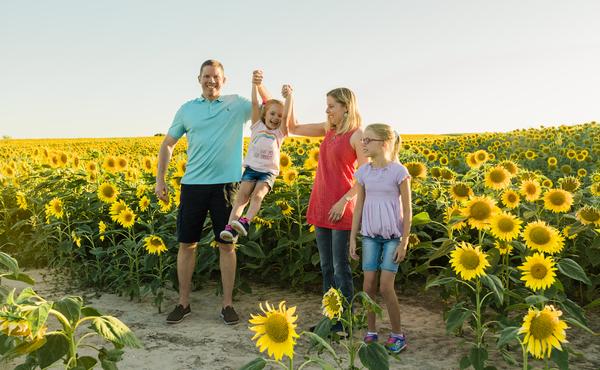 The door of the Texas tavern swings open and a young woman enters with a confident stride. Several groups of young people are drinking and talking, with country music playing in the background. Some couples are dancing. The 21-year-old Courtney greets her friends and makes her way to the dance floor for the Texas two-step, as she does twice a week. From the other side a good-looking guy approaches her. They exchange glances and she smiles. Brian, who is 22, asks if she would like to dance.

Brian and Courtney join hands. Two quick steps, two slow ones. He doesn’t seem to be a great dancer but that doesn’t matter to her. She begins a conversation with him. “It was a spring day in 2002,” she recalls distinctly. “When you go to a bar you don’t think: I am going to find my husband here.” But that’s what happened.

When the dance finishes, they agree to begin seeing one another regularly. “In January 2003, he went to Florida for military training and we were married when he got back.” They have been married now for sixteen years, with two daughters and a baby on the way. 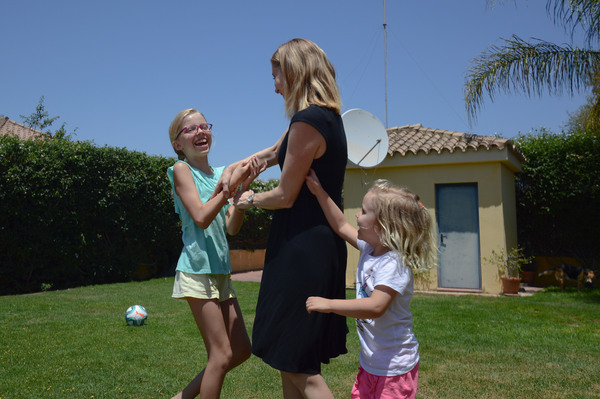 “I was born in a small town in southern Texas. There were some Catholics living there but my parents are Baptists and I grew up in that faith,” Courtney explains as she packs up their belongings in their home in El Puerto de Santa Maria in the south of Spain. Brian is working, like every morning, at the Rota Naval Base, and 11-year-old Carrie and 5-year-old Joanna are listening to music.

“My mother had taught me that Catholics worship Mary and the saints, which made me think they weren’t even Christians. Later, when I started high school, we moved to central Texas, where there were even fewer Catholics.” She continued to practice her Protestant faith until she enrolled in the University, where she majored in Spanish. And it was there, in that tavern, where she met Brin, who was a Catholic and majoring in engineering.

The famous Texas two-step has its origins in the polka, waltz and jitterbug. “In the U.S. we usually say that we are all immigrants,” Courtney remarks. “Brian’s family, whose surname is Schonefeld, came from Germany, but we are very American.” In the Texas two-step, the leader determines the movements and patterns of the pair as they move counterclockwise around the dance floor.

’s job has meant that their family has had to move frequently, to California, Hawaii, Mississippi, Guam, Florida, Spain for the last two years, and now on to North Carolina.

Returning to the faith

“I was a little confused at the university. I had acquired some bad practices, and thought I could make all the decisions in my life without needing God,” Courtney admits. “I began to consider myself an agnostic. Brian was Catholic, but he told me that after a trip to France during his sophomore year he had stopped practicing.”

“I loved him so much that I decided I had to become a better person. I told Brian that I wanted to start going to church every Sunday, and he said, ‘Fine, but I am only going to a Catholic church, not a Protestant one.’” Courtney says that the reason Brian started to practice his faith again was because she insisted. She asked him some challenging questions about Catholicism but he didn’t know how to answer her, “so we stopped talking about our faith. We went to church together for many years but no longer argued about it.” 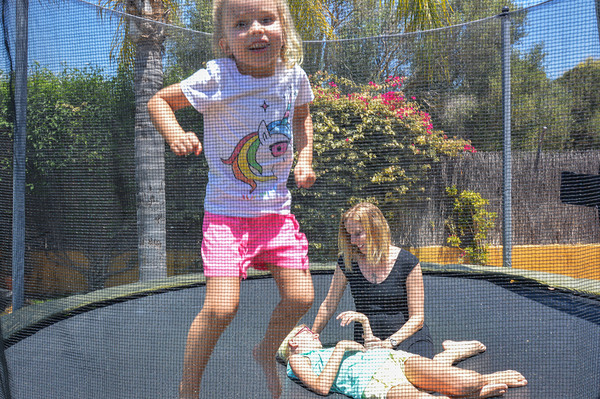 Courtney’s parents accepted Brian right from the start. It didn’t matter to them that he was Catholic; they saw how well he treated her and how much they loved one another. “We were married in the Catholic Church with a dispensation, and my parents were happy to pay for the wedding. Brian is a very good man and they are happy with our marriage. They love him like another son.”

Their first move was to California, where Courtney began to volunteer in the local parish. The priest, who knew she was Baptist, one day said in his homily: “I am well aware that Protestants say that they believe in the Bible, but they don’t believe the sixth chapter of John’s Gospel: ‘I am the bread of life.’ It is the Body of Christ, not a symbol.” “I was petrified,” she recalls. “When we got home I quickly opened up the New Testament and said to myself: He is right about this, but not about Mary and the Pope.”

The Schonefelds returned to Texas for a time, and Brian began listening to a Catholic radio station. Every day on returning home he would tell Courtney what new things he had learned. “I also began to look for answers on the internet to my own questions about the faith. And I began going to Bible study classes, where I met my best friend, who is Catholic and who suggested many good books to me. I studied and prayed and came to the conviction that here was the fullness of the faith. But it was very difficult for me to convert because I knew I was going to hurt my parents, who thought that I no longer saw myself as saved and had to ‘earn’ my salvation.”

One of the books that most impressed Courtney was Rome, Sweet Home by Scott and Kimberly Hahn. “When I read the part about her conversion I thought that we were very much alike. I prayed less than she did but tried to be loyal to my faith, gave ten per cent of my earnings to the church, etc. I was moved when she said her decision to become a Catholic was motivated by her desire to give God her capacity to engender life. I thought, I am saying no to God here.”

Before marrying, Courtney told Brian she had no interest in having children. He said in that case they wouldn’t be able to marry, so they came to an agreement: they would have only one child. “After our wedding he asked me not to take the pill, but I paid no attention to him and didn’t tell him, because with my Protestant mentality that seemed strange to me. After the first child I wanted to have my tubes tied, but Brian convinced me to wait a bit. It was then that I stumbled on the book by the Hahns.”

“I told Brian: now that I’m sure I want to become a Catholic we need to follow the Church’s teachings. We can no longer use contraceptives. I was very nervous because I knew that many Catholics don’t understand natural family planning very well. But after a few days he told me: ‘You’re right. Let’s learn some more about this.’ That was the decisive step for my conversion. Little by little I began to understand and accept all the rest.” 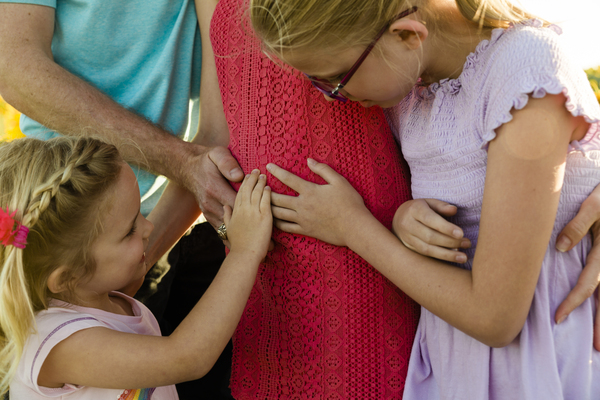 Courtney, who is four months pregnant, devotes her time to caring for her family and her Spanish study company. In the U.S., it is mandatory to obtain a teacher's certificate in each state. "I don't like teaching children and with all the moves we have had to make this would be a problem. But I love helping adults who are studying to be teachers. I write digital books and do courses and tutorials in English and Spanish. It's a gift from God that I can do this. “

When they moved to Spain two years ago, Courtney was already a Catholic. One day she went to confession with an American priest at the naval base in Rota. She told him she felt a little depressed, and didn’t feel God’s love for her. He told her: “those are only feelings, so don’t worry. But if you want to know God’s love better I recommend that you go to daily Mass.”

So Courtney began going to daily Mass. “One day after Mass I met a woman there. Her name was Paloma. She invited me to a center of Opus Dei in El Puerto de Santa Maria. I began to talk with a numerary who lived there, Juana, about my faith and about how to be a better person at home. That helped me a lot. I was delighted with the idea that I could attain sanctity through little things done with love. That is what I liked most about the Work. That and the family atmosphere, which I was very sensitive to from my Protestant background.”

“I began to pray regularly. Daily Mass helped me to sense God’s love for me. One day we were visiting my parents in Texas and I was trying to figure out how I could get to Mass without having my own car. Suddenly I had the clear perception that God was calling me to the Work. I can’t explain it better than that. I simply saw it clearly.”

Brian is not in Opus Dei, but Courtney is convinced that he has helped her to find the Catholic faith and her path as a supernumerary. And she thinks she has also helped him to rediscover his own faith.

“I don’t know if he understands my vocation, but he certainly gives me support. He sees that Opus Dei helps me to have a more personal relationship with God. At times I read to him a passage from a book that has helped me, or we pray the Rosary together.”

Courtney tries to follow the example of her friend Paloma. “The Protestant churches have a strong sense of community. So when I see someone new, I try to approach her and introduce myself, as Paloma did with me. That’s how I met a young woman who wanted to become a Catholic. I was her sponsor. I also give catechism classes for young children. It’s not my cup of tea but one day a week is fun.” 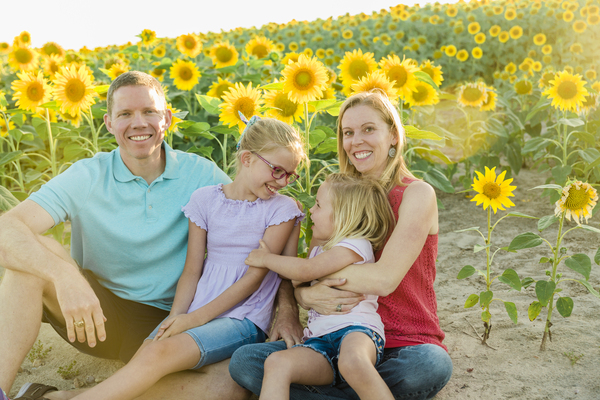 In a few days their family will leave Spain for Brian’s new assignment in North Carolina. They will soon be exploring nature trails and rowing along the coast, which they are looking forward to. But in every place they live they leave behind many friends and a piece of their heart. Courtney is the one who suffers the most. But now she knows that all these moves form part of a dance. And the pace is set by the Leader.