August 15th is the feast of our Lady's Assumption. This chapter from the "Life of Mary" series explains the theological meaning of Mary's being taken up into heaven, body and soul.

Mary's final years on earth—from Pentecost to the Assumption—are wrapped in obscurity. Scripture says nothing, and Tradition contains only faint and uncertain echoes. Her days would have been spent quietly and busily—like the unseen spring that gives the garden its fragrance, the orchard its fruitfulness. The Church's liturgy, making use of words from Scripture, describes Mary as the enclosed garden and sealed fountain (Song 4:12), the well of living waters that flow down from Lebanon (ibid, 15). Just as when Jesus was still on earth, she passed unnoticed, keeping watch over the Church's first steps. 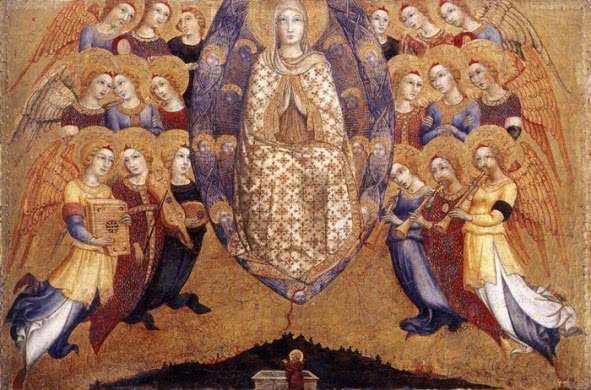 One thing we know for certain is that Mary lived with St. John, for he had been entrusted to care for her as a son. And St. John, in the years immediately following Pentecost, lived in Jerusalem, where we see him constantly at the side of St. Peter. Just prior to the Council of Jerusalem, about the year 50 (cf. Acts 15:1-34), Paul refers to the beloved disciple as one of the pillars of the Church (Gal 2:9). If Mary was still at his side, she would have been about 70, as some ancient traditions suggest: the age Sacred Scripture sees as the mature fulfillment of human life (cf. Ps 89:10).

But Mary's place was in heaven, where her Son awaited her. And so, on a day that remains unknown to us, Jesus brought her into heavenly glory. When Pope Pius XII declared the dogma of the Assumption in 1950, he left open the question whether Mary died and rose again immediately, or whether she went directly to heaven without experiencing death. Today, as in the early Church, most theologians think that Mary did in fact die, but (as with Christ) not on account of any sin (for she is the Immaculate One!) but in order to resemble Jesus more completely. And thus, in the sixth century, the Eastern churches began to celebrate the feast of Our Lady's Dormition, to try to express that her passage was more like falling asleep than dying. Mary left this earth, as some saints have said, in a transport of love.

According to these traditions, all the Apostles (except St. James the Greater, who had undergone martyrdom, and St. Thomas, who was on his way back from India) gathered in Jerusalem to accompany her in her last moments.

The writings of the Fathers and sacred authors, especially beginning in the fourth and fifth centuries, pass on some details about Mary's Dormition and Assumption based on accounts dating back to the second century. According to these traditions, when Mary was on the point of leaving this world, all the Apostles (except St. James the Greater, who had undergone martyrdom, and St. Thomas, who was on his way back from India) gathered in Jerusalem to accompany her in her last moments. Then one quiet and bright afternoon they closed her eyes and placed her body in a tomb. A few days later, when Thomas arrived and insisted on seeing Mary's body, they found the tomb empty and heard celestial music.

Along with fragments of truth that these accounts may contain, what is absolutely certain is that the Virgin Mary, by a special privilege of Almighty God, did not experience corruption: her body, glorified by the Most Blessed Trinity, was united to her soul, and Mary was assumed into heaven, where she reigns, living and glorious, at the side of Jesus, to glorify God and intercede for us here below. Pius XII defined this truth as a dogma of faith.

In spite of Scripture's silence, a passage from the book of Revelation allows us to glimpse that glorious triumph of our Lady: A great sign appeared in heaven: A woman clothed with the sun, the moon under her feet, and on her head a crown of twelve stars (Rev 12:1). The Magisterium sees in this scene not only a description of the Church's final victory, but also an affirmation of the victory of Mary (type and figure of the Church) over death. It is as though the book's author, the disciple who had cared for Mary until she went to heaven, wanted to leave us a discreet testimony to this historical and salvific event, which the Christian people, inspired by the Holy Spirit, accepted and venerated from the first centuries.

And we, inspired by the liturgy of the Vigil Mass for this feast, acclaim our Lady with these words: “Glorious things are said of thee, O Mary, who today art exalted above the choirs of angels: 'Blessed are you, O Mary, for along with Christ, you have attained eternal victory.'"