Just as St Joseph watched over the household of God-made-man in Nazareth, so too he continues to care for the Lord’s household on earth now, the continuation of the Incarnation which is the Church. 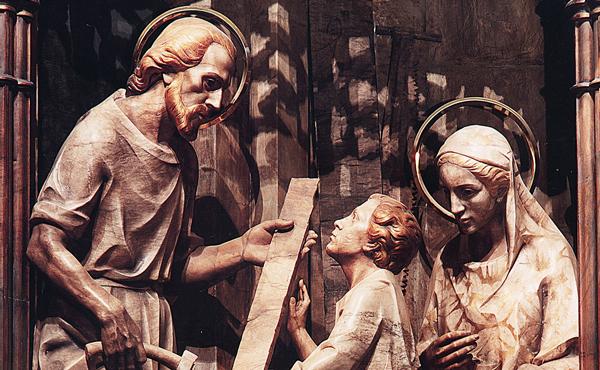 A year of graces

After the experience of 2020, many people are wondering what to expect in this year beginning. Of course we cannot tell what the future holds, but we can be sure that this year will be a time of many and great graces since the Holy Father has declared a Year of St Joseph from 8 December 2020 to 8 December 2021. As Francis explains, this Holy Year is to mark the 150th anniversary of the declaration of St Joseph as “Patron of the Universal Church” by Blessed Pius IX in 1870. Just as St Joseph watched over the household of God-made-man in Nazareth, so too he continues to care for the Lord’s household on earth now, the continuation of the Incarnation which is the Church.

Pope Francis’ devotion to St Joseph has been a hallmark of his pontificate from the very beginning. The Holy Father inaugurated his Petrine ministry on 19 March 2013, Feast of St Joseph. A few weeks later on 1 May, Memorial of St Joseph the Worker, he delivered a catechesis on work in light of the holy patriarch. On that same date the Congregation for Divine Worship and the Discipline of the Sacraments issued the decree whereby in continuity with the wishes of Benedict XVI, Pope Francis disposed that the name of St Joseph be mentioned after the name of Our Lady in Eucharistic Prayers II, III and IV. On 5 July 2013 the Holy Father consecrated the Vatican City State to St Joseph, since, as he put it, “his presence helps us to be ever stronger and to have the courage to make space for God in our life, so that good may conquer evil”.

For years the Pope has had on his desk a statue of St Joseph lying asleep. He brought this statue with him from Buenos Aires to Rome. During a meeting with families in the Philippines he confided:

“I would like to tell you something very personal. I have great love for Saint Joseph, because he is a man of silence and strength. On my table I have an image of Saint Joseph sleeping. Even when he is asleep, he is taking care of the Church! Yes! We know that he can do that. So when I have a problem, a difficulty, I write a little note and I put it underneath Saint Joseph, so that he can dream about it! In other words I tell him: pray for this problem!” (Manila, 16 January 2015).

There is a clear continuity here with previous Popes. St John Paul II provided an unprecedented meditation on the “Guardian of the Redeemer” in his apostolic exhortation Redemptoris Custos of 15 August 1989. Benedict XVI, Joseph Ratzinger, preached repeatedly on the person and mission of St Joseph and affirmed his special devotion to his personal patron.

“With a Father’s heart”

In the introduction to his apostolic letter Patris Corde (8 December 2020), the Holy Father tells us: “I would like to share with you some personal reflections on this extraordinary figure, so close to our own human experience”. The document does contain several personal references, including a prayer to St Joseph for help in difficulties, which the Pope has been saying daily for over forty years, as well as reflections of the Holy Father in the context of the pandemic. It offers a teaching on St Joseph drawing on Scripture, the Fathers of the Church, the Magisterium of previous Popes and the Catechism of the Catholic Church.

It is a rich document which deserves to be read calmly and brought to prayer. It includes insights for the spiritual life including the value of hidden service, how to deal with one’s defects, strong encouragement towards the Sacrament of Penance, being accepting even when one doesn’t understand, being creatively courageous and turning problems into possibilities.

This document is essentially about the fatherhood of Joseph, as indicated by the titles of its seven parts: 1. A beloved father; 2. A tender and loving father; 3. An obedient father; 4. An accepting father; 5. A creatively courageous father; 6. A working father; 7. A father in the shadows. “Our world today needs fathers”, says the Pope, and he presents ideas which are helpful for fathers of families, leaders in society and priests, and indeed for everyone. The letter ends with an encouragement to seek holiness; “The saints help all the faithful to strive for the holiness and the perfection of their particular state of life. Their lives are concrete proof that it is possible to put the Gospel into practice…. We need only ask St Joseph for the grace of graces: our conversion”. 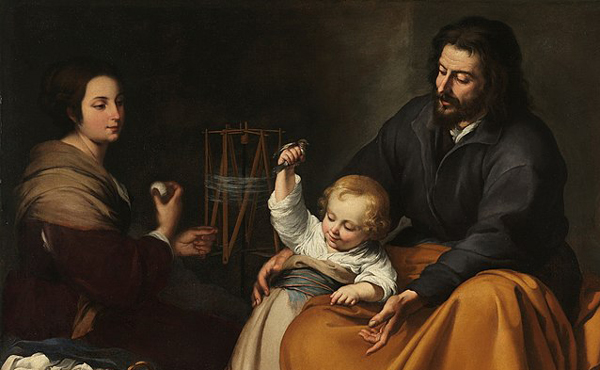 In recent months many people have had to change how they work, and there is much discussion about how the pandemic experience may have altered some patterns of work for the long-term. Such a focus on work might also help to consider the deeper matters of the dignity of work in itself, and the fact that it is a privileged place to grow in virtue. Being an ordinary working person is to be ideally placed to become identified with Christ, since as the Holy Father points out: “St Joseph’s work reminds us that God himself, in becoming man, did not disdain work”.

While stressing the urgent need to overcome unemployment for the sake of individuals and families, particularly in the light of the pandemic, Pope Francis also makes several theological statements about work which are worth pondering in our own time: “Work is a means of participating in the work of salvation, an opportunity to hasten the coming of the Kingdom, to develop our talents and abilities, and to put them at the service of society and fraternal communion… Working persons, whatever their job may be, are cooperating with God himself, and in some way become creators of the world around us.”

The joy of St Josemaría

St Josemaría experienced a great joy when, during the Second Vatican Council, Pope St John XXIII included St Joseph, after Our Lady, within the Roman Canon (also called Eucharistic Prayer I). It is easy to imagine his joy at the proclamation of the Year of St Joseph for the whole Church.

St Josemaría grew in his knowledge and love of St Joseph throughout his life. His own father was called José, and within his own name the founder of the Work did not wish to separate St Joseph from Mary. In the latter years of his life, he said that his devotion to St Joseph grew “impetuously” and he delighted in receiving new insights into “Josephine” theology. In the holy patriarch, St Josemaría saw a model of the spirit of holiness and apostolate through the sanctification of daily tasks, which is the call of so many ordinary faithful.

In his 1963 homily entitled “In Joseph’s workshop”, St Josemaría preached:

“St Joseph really is a father and lord. He protects those who revere him and accompanies them on their journey through this life – just as he protected and accompanied Jesus when he was growing up. As you get to know him, you discover that the holy patriarch is also a master of the interior life – for he teaches us to know Jesus and share our life with him, and to realise that we are part of God’s family” (Christ is passing by 39).

Rev. Donncha Ó hAodha is the Regional Vicar of the Opus Dei Prelature in Ireland, author of several CTS booklets and a regular contributor to Position Papers.