Characters in a Divine Story

Focusing on the surprising story of Irene Kalpas, Pablo Perez, Professor of Contemporary History at the University of Navarra, talks about how the history of Opus Dei can be told through each of the persons who have found their path to God in this institution of the Catholic Church. 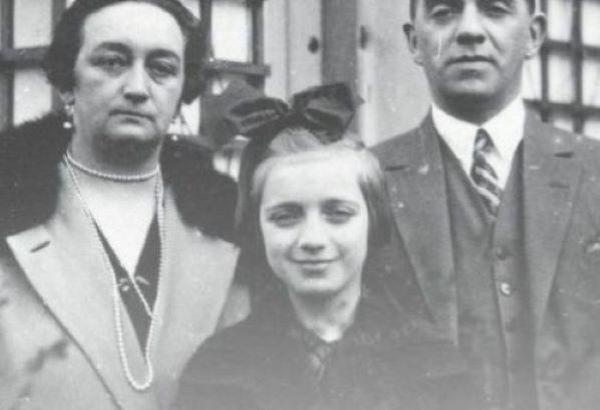 Irene Kalpas with her parents.

Partial transcript of a podcast by Pablo Perez:

Speaking as a professional historian, I am more and more convinced that the best way to grasp the truth about history is to get to know its protagonists better.

History, in my opinion, is the remembrance of the use made of their freedom by those who have come before us in time. And the better we know how they decided and what they decided, the better understanding we have of the history they helped bring about.

So, to get to know Opus Dei and its history better, I think the key is to get to know more people of Opus Dei better, including those who have already passed away. In fact, it is possible to grasp the full meaning of a person’s life only after he or she has died. Those of us who have experienced the death of our own parents, know that we have also found our own lives illumined in a completely new way by this sad event.

This reality of how our life takes on its full meaning only with our death led me to become interested in a section of the Official Bulletin of the Prelature of the Holy Cross and Opus Dei. The Bulletin is called Romana and is published twice a year in Rome. Almost all of its sections are available online in Spanish and English, except for one which used to be available online but isn’t any longer, and which in the context of this talk interests me the most. This is the section called In Pace. In Peace. It gathers together the names of the faithful of Opus Dei who had passed away during the previous six months.

Therefore, when I was asked to speak about the history of Opus Dei, the first thing I did was to read some of the brief biographies of people of Opus Dei in the In Pace section of Romana. I was immediately struck by one that I read in Romana 54 (January-June 2012):

Irene Kalpas was born in Warsaw on August 13, 1915. At the age of 24, during the Second World War, she became a widow; her husband was a Polish officer murdered at Katyn. In 1944, her whole family was scattered among various concentration camps. Irene spent the rest of the war in the Ravensbrück camp. After the war, she worked in a government office in Warsaw. She met Opus Dei on June 26, 2002, and was captivated by the spirit of the Work and the character and personality of St. Josemaria. She became a faithful of the Prelature in 2003, at the age of 88, and from then on gave an apostolic dimension to her whole life. She dealt with a great number of people, especially young people, who came to her for advice. She was faithful to that apostolate until the last moments of her life, with a self-sacrificing dedication that overcame her state of health and the difficulties caused by fatigue and the limitations of age. Asking God for the grace “to persevere to the end,” she died in Warsaw on March 23, 2012.

When I read this biography, by chance I had just seen the movie Katyn about the brutal events that took place in the forest of Katyn, near Smolensk, in territory that was then part of the Soviet Union. I had shown it to my history students in the school of communications to help them grasp the complexity of that historical event and the suffering it had given rise to. And so, when I read that brief biography in Romana, I realized that a widow of the Katyn massacre was also a protagonist in the history of Opus Dei.

Some time ago, when speaking with some young people who had asked me to talk about the history of Opus Dei, as I am doing now, I used this example. And I was quite surprised when, at the end of my talk, one of the young fellows there came up to me and said: “Look, I know that woman.” He was Polish himself. And then he told me this story, which I’m going to recount briefly.

But first, I want to talk a bit about the Katyn massacre, which was horrible. If you don’t know about it, I recommend that you read a brief account of what actually happened there. The truth was hidden for many years. The graves were discovered when the Germans occupied the Soviet zone in their attack on the USSR. They found enormous common graves, which contained more than 20,000 bodies (they calculated that the Soviets assassinated 23,000 persons with a bullet in the back of the neck, including priests, intellectuals, and above all army officers; between 13,000 and 16,000 army officers).

When the Germans discovered the graves, the Soviets claimed that, in reality, the Germans had killed them and that trying to place the guilt on the Communists, on the Russians, was a Fascist lie. Like the Nazis, they could not be trusted. People were doubtful about the facts. Not wanting to become enemies of Stalin, the allies, specifically the English, let the whole episode pass.

Of course, Irene Kalpas had deeply experienced the suffering caused by that event. Moreover, her home had been badly damaged in the Warsaw uprising of 1944, which we do not have time talk about here in any detail. She had not been able to inherit that house for herself, due to the legal difficulties that arose. It caused her such sadness to go back and see it that she tried to avoid her former home on her trips through Warsaw when she was a government worker in Communist Poland after returning from the concentration camp. But as she grew older, she had to go to the optician with some frequency, and the optician moved to a new site on the same street where she had lived, on Filtrova Street, number 27. And she went to see the optician a number of times.

She took the tram and never walked over to see her old home. She didn’t want to see it because of the emotions it awakened. Until one day, without being able to explain why (she felt urged interiorly to do it), she got off the tram and decided to keep on walking along the street to Filtrova 27. When she arrived there, she wanted to see if the beautiful roses in the garden were still there (it was June 26, 2002), so she went in the gate to have a closer look. Finally, she rang the bell. A pleasant young man opened the door and asked her if he could help her. She replied: “I wanted to see if roses still grow in the back garden.”

“Fine, come in.” The house had changed greatly from her time there (as I said, it had been badly damaged in the 1944 uprising). What had been the dining room was now a library, with a portrait of John Paul II hanging above the table. She said: “You see, I have lived here. The dining room used to be there.” The living room was now a small oratory. Where many of the most moving events in her life had taken place, she now found Christ in the Eucharist dwelling. She asked with surprise: What is this place? The young man explained that it was a centre of Opus Dei. Her surprise gave rise to more questions. She asked about the Work, about this path for sanctifying daily life, and over time realized that this path was meant for her too. And as she says in a very nice video on Opus Dei’s website (which can be seen here), she encourages older people by telling them that it always a good moment to follow God’s voice faithfully when you hear it, because this leads to happiness.

So, this is the story of Irene Kalpas, and it is also the story of Opus Dei: the life of each person who is part of it, since God has shown them that this is the path He wants for them in the world.