Commentary on the Gospel: The Lamb of God

Gospel for the Second Sunday in Ordinary Time (Cycle A), and commentary. 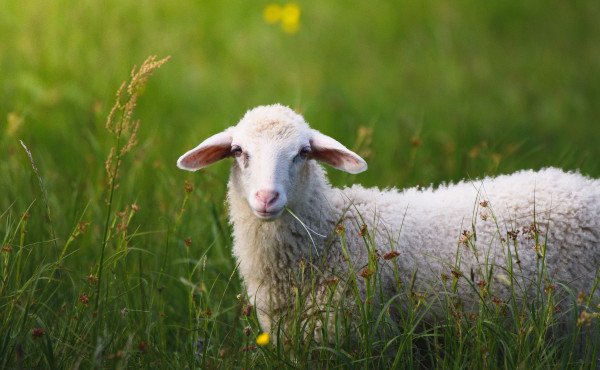 The next day he saw Jesus coming toward him, and said,

“Behold, the Lamb of God, who takes away the sin of the world! This is he of whom I said, ‘After me comes a man who ranks before me, for he was before me.’ I myself did not know him; but for this I came baptizing with water, that he might be revealed to Israel.”

“I saw the Spirit descend as a dove from heaven, and it remained on him. I myself did not know him; but he who sent me to baptize with water said to me, ‘He on whom you see the Spirit descend and remain, this is he who baptizes with the Holy Spirit.’ And I have seen and have borne witness that this is the Son of God.”

On the shores of the Jordan, John the Baptist was preaching a baptism of penance to people from every background, to prepare for the Messiah’s coming. The Gospel according to Saint John relates that when the Baptist finally saw Jesus come before him to be baptized, he announced it in a loud voice, applying to him a mysterious and solemn title that the Roman Liturgy continues pronouncing at Mass before Communion: “Behold, the Lamb of God, who takes away the sin of the world!”

The image of the lamb, with its characteristic meekness and coat of white wool, would be very familiar for any Jewish contemporary of Jesus. Many of them would have been raised in country areas where sheep and cattle were a common site. They would also recall the passage from the prophet Isaiah, who presented the Suffering Servant of the Lord as a lamb that lets itself be sacrificed without complaint in order to free us from evil (Is 53:7).

Every year pious Jews made a pilgrimage to Jerusalem for the feast of the Passover and went to the Temple to choose at least one lamb per family, to sacrifice it for the Passover meal in the evening. The lamb had to be a male, one year old and without any defect or broken bones—as stipulated in the Law of Moses (cf. Ex 12:1ff). It should also be sacrificed at midday; and it should be eaten while standing up, with sandals on one’s feet, and with unleavened bread. The doorposts of the houses should be daubed with its blood to commemorate the passing of the Lord, in Egypt, when the last plague killed all the first-born who had not been protected by the blood of the slain lamb.

In announcing the Messiah as the Lamb of God, the Baptist revealed essential aspects of his redemptive mission. Benedict XVI said that the expression “lamb of God” points to the theology of the cross present in Jesus’ baptism, to his descent into the depths of death.[1] The paschal lamb that commemorated the Jewish people’s liberation from Egypt begins to be revealed at the Jordan as the foreshadowing of the true Lamb, innocent and meek, who will be immolated at midday on the Cross for all men, to free them from sin with his blood poured out for them.

Referring to the Baptist’s words “the Lamb of God, who takes away the sin of the world,” Pope Francis remarked: “the verb that is translated as ‘take away’ literally means ‘to lift up,’ ‘to take upon oneself.’ Jesus came into the world with a precise mission: to liberate it from the slavery of sin by taking on himself the sins of mankind. How? By loving. There is no other way to conquer evil and sin than by the love that leads to giving up one’s life for others”[2]

“What does it mean for the Church, for us today, to be disciples of Jesus, the Lamb of God? It means replacing malice with innocence, power with love, pride with humility, status with service.”[3]

[1] Cf. Jesus of Nazareth. From the Baptism in the Jordan to the Transfiguration, Joseph Ratzinger-Benedict XVI, Doubleday, 2007, pp. 20-21.