Commentary on the Gospel: "Give me a drink"

Gospel for the 3rd Sunday of Lent (Cycle A), and commentary. 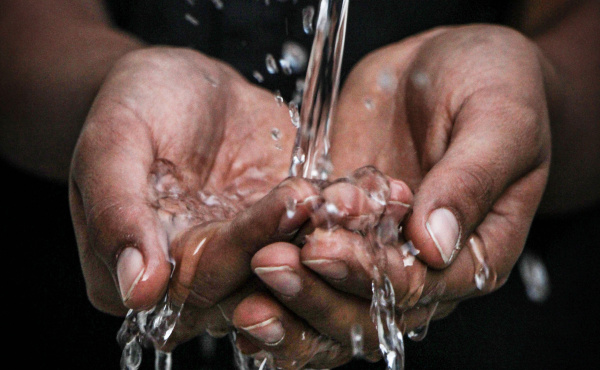 So he came to a city of Samaria, called Sychar, near the field that Jacob gave to his son Joseph. Jacob’s well was there, and so Jesus, wearied as he was with his journey, sat down beside the well. It was about the sixth hour.

There came a woman of Samaria to draw water. Jesus said to her, “Give me a drink.” For his disciples had gone away into the city to buy food.

The Samaritan woman said to him, “How is it that you, a Jew, ask a drink of me, a woman of Samaria?” For Jews have no dealings with Samaritans.

Jesus answered her, “If you knew the gift of God, and who it is that is saying to you, ‘Give me a drink,’ you would have asked him, and he would have given you living water.”

The woman said to him, “Sir, you have nothing to draw with, and the well is deep; where do you get that living water? Are you greater than our father Jacob, who gave us the well, and drank from it himself, and his sons, and his cattle?”

The woman said to him, “Sir, give me this water, that I may not thirst, nor come here to draw.”

The woman said to him, “Sir, I perceive that you are a prophet. Our fathers worshiped on this mountain; and you say that in Jerusalem is the place where men ought to worship.” Jesus said to her, “Woman, believe me, the hour is coming when neither on this mountain nor in Jerusalem will you worship the Father. You worship what you do not know; we worship what we know, for salvation is from the Jews. But the hour is coming, and now is, when the true worshipers will worship the Father in spirit and truth, for such the Father seeks to worship him. God is spirit, and those who worship him must worship in spirit and truth.”

The woman said to him, “I know that Messiah is coming (he who is called Christ); when he comes, he will show us all things.” Jesus said to her, “I who speak to you am he.”

Just then his disciples came. They marveled that he was talking with a woman, but none said, “What do you wish?” or, “Why are you talking with her?”

So the woman left her water jar, and went away into the city, and said to the people, “Come, see a man who told me all that I ever did. Can this be the Christ?” They went out of the city and were coming to him.

Meanwhile the disciples besought him, saying, “Rabbi, eat.” But he said to them, “I have food to eat of which you do not know.” So the disciples said to one another, “Has any one brought him food?” Jesus said to them, “My food is to do the will of him who sent me, and to accomplish his work.

Do you not say, ‘There are yet four months, then comes the harvest’? I tell you, lift up your eyes, and see how the fields are already white for harvest. He who reaps receives wages, and gathers fruit for eternal life, so that sower and reaper may rejoice together. For here the saying holds true, ‘One sows and another reaps.’ I sent you to reap that for which you did not labor; others have labored, and you have entered into their labor.”

Many Samaritans from that city believed in him because of the woman’s testimony, “He told me all that I ever did.” So when the Samaritans came to him, they asked him to stay with them; and he stayed there two days. And many more believed because of his word. They said to the woman, “It is no longer because of your words that we believe, for we have heard for ourselves, and we know that this is indeed the Savior of the world.”

On his journey towards Galilee, Jesus stops at the foot of Mount Ebal, next to Sychar, where the famous well of the patriarch Jacob was located, which was the pride of the Samaritans. This region was part of the Northern Kingdom of Israel. After falling into the hands of the Assyrians (722 BC), the local population eventually mixed in with the pagans brought there. Centuries later, the Jewish King John Hyrcanus destroyed the Samaritan temple built on Mount Gerizim.Therefore, despite their common background, the enmity between Jews and Samaritans was long-standing (cf. 2 Kgs 17:34-40).

But Jesus doesn’t hesitate to stop in Sychar. Tired and hungry from the journey, the Master sends his disciples to look for food and sits down beside the well to wait for them. It is then that a Samarian woman comes to fill her jar, and a dialogue is opened between two thirsts, symbolized by the water, that will be quenched in the end: the divine thirst to save mankind and the thirst for God in human hearts.

“Recollect yourselves and go over the scene again slowly in your minds,” Saint Josemaria advises. “It is a touching sight to see our Master so exhausted. He is hungry too—his disciples have gone to a neighboring village to look for food. And he is thirsty. But tired though his body is, his thirst for souls is even greater. So, when the Samaritan woman, the sinner, arrives, Christ with his priestly heart turns eagerly to save the lost sheep, and forgets his tiredness, his hunger and his thirst.”[1]

“Give me a drink.” The long-standing Jewish suspicion of Samaritans, which stopped them from speaking to them or even using their utensils,[2] is overcome by Jesus when he humbly asks the surprised Samaritan woman for a drink of water. But in reality, it is she who had to rise above the centuries-old prejudices in order to ask Jesus for what He offers: a more powerful water for quenching one’s thirst than that drawn from the famous well of Jacob. The woman understands what Jesus is implying: that He is greater than Jacob and his well, as is the marvelous water that He is offering her so she will never be thirsty again.

In the Old Testament, “living water” symbolizes the action of God (cf. Jer 2:13; Zech 14:8; Ezek 47:9). In reality Jesus is the “gift of God,” and the living water that will become “a spring of water welling up to eternal life” is supernatural grace. Hence Jesus prepares the woman to receive it, by helping her recognize her sinful situation. The Samaritan woman expresses interest in her relationship with God and where best to adore Him. The Master’s words awaken in her soul an authentic thirst for God. She speaks of the long-awaited Messiah and, discovering that He is present with her, goes to make Him known to her friends

This famous passage from the Gospel of Saint John presents us with a precious path to conversion. In a certain sense, it has a universal character and we can all see ourselves reflected in it. Pope Francis said: “Jesus needed to encounter the Samaritan woman in order to open her heart: He asks for a drink so as to bring to light her own thirst. The woman is moved by this encounter: she asks Jesus several profound questions that we all carry within but often ignore. We, too, have many questions to ask, but we don’t have the courage to ask Jesus! Lent, dear brothers and sisters, is the opportune time to look within ourselves, to understand our truest spiritual needs, and to ask for the Lord’s help in prayer. The example of the Samaritan woman invites us to exclaim: ‘Jesus, give me this water that will quench my thirst forever.’”[3]