Commentary on the Gospel: Cleansing of the Temple

Gospel for the 3rd Sunday in Lent (Cycle B), and commentary. 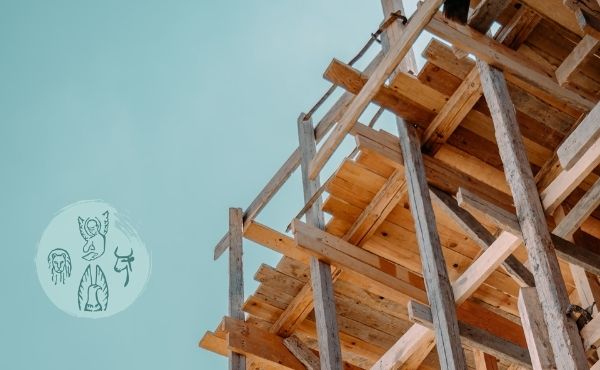 The Passover of the Jews was at hand, and Jesus went up to Jerusalem. In the temple he found those who were selling oxen and sheep and pigeons, and the money-changers at their business. And making a whip of cords, he drove them all, with the sheep and oxen, out of the temple; and he poured out the coins of the money-changers and overturned their tables. And he told those who sold the pigeons,

“Take these things away; you shall not make my Father’s house a house of trade.”

His disciples remembered that it was written, “Zeal for thy house will consume me.” The Jews then said to him, “What sign have you to show us for doing this?” Jesus answered them,

“Destroy this temple, and in three days I will raise it up.”

The Jews then said, “It has taken forty-six years to build this temple, and will you raise it up in three days?” But he spoke of the temple of his body. When therefore he was raised from the dead, his disciples remembered that he had said this; and they believed the scripture and the word which Jesus had spoken.

Now when he was in Jerusalem at the Passover feast, many believed in his name when they saw the signs which he did; but Jesus did not trust himself to them, because he knew all men and needed no one to bear witness of man; for he himself knew what was in man.

The liturgy for the 3rd Sunday of Lent invites us to contemplate the Gospel scene often called the “purification” or cleansing of the Temple. The other evangelists show us this event taking place during Jesus’ final week in Jerusalem, when he brings to fulfilment the mission he had received from the Father, while John places it at the beginning of Jesus’ public ministry.

By driving the sellers and money-changers out of the Temple, Jesus recalls the prophetic words of Zechariah: “there shall no longer be a trader in the house of the Lord of hosts on that day” (Zech 14:21). The Jews who witnessed this dramatic event realized it was a symbolic gesture, and asked for a sign to show he is acting in God’s name and power, as a true prophet.

Jesus offers a sign that no other prophet could: the Cross and Resurrection. “Destroy this temple, and in three days I will raise it up.” The meaning of these words will be revealed only at the Resurrection, when the disciples “remembered that he had said this; and they believed the scripture and the word which Jesus had spoken.”

Jesus’ Cross and Resurrection will open a new way to worship God. The place for encountering God will no longer be the Temple but the risen and glorified Body of Jesus in the sacrament of the Holy Eucharist, where all mankind is united.

A few chapters later in John’s gospel, Jesus will tell the Samaritan woman: “believe me, the hour is coming when neither on this mountain nor in Jerusalem will you worship the Father … the true worshipers will worship the Father in spirit and truth, for such the Father seeks to worship him” (Jn 4:21-23).

Saint Paul refers to this new form of worship when he says “you are God’s temple” (1 Cor 3:16), and above all when he exhorts Christians to offer their bodies as a living sacrifice that is holy and acceptable to God (cf. Rom 12:1). In this new “spiritual worship,” those united to Christ adore and give glory to the living God.

After the cleansing of the Temple, the evangelist says that “many believed in his name when they saw the signs which he did,” but that Jesus did not trust himself to them because he “knew what was in man.”

Jesus’ purification of the Temple reminds us today of the need to purify our faith, to once again ground our life on the God who shows us his power and infinite love on the Cross, the source of our salvation. Only by passing through the Cross will we reach the glory and joy of the Resurrection.