Fr. Jose Luis Soria first met St. Josemaria in 1953 and worked with him in Rome for 20 years. Fr Soria now exercises his priestly ministry in Canada.

Yes, in the book I explain what I think was one of St Josemaria’s main characteristics. On the one hand his optimistic, smiling attitude to life, which made him such an attractive, positive person to know. That was what can truly be called his cheerfulness, his joyfulness. It was part of his temperament, strengthened by his sincere, radical awareness of the fact that he was a child of God.

On the other hand, his ready response to others, with a quip or joke, also showed a highly developed sense of humor, going beyond mere cheerfulness. It was true wit, a rapid capacity for seeing what was incongruous, ambiguous, or indelicate, and responding with an unexpected, amusing twist. St Josemaria was also a teacher in that sense. When you saw him in a relaxed family setting, you would often smile or laugh out loud at his intelligent, affectionate, humorous comments.

At the same time, St Josemaria had a strong, powerful personality and put things very clearly. Didn’t this sometimes create tension? How did he correct people?

It’s true that he had a strong personality, typical of his Aragonese background. He used to say that that was one reason why God chose him to found Opus Dei, because there were so many obstacles to overcome in getting the Work going. And it did give rise to tension, especially if it was someone who didn’t yet know St Josemaria too well, or was of a timid disposition. It’s always painful to be corrected by someone, because it wounds our self-love. But in the twenty-two years I spent with him I can only recall one occasion when he corrected me without good cause. And as soon as he realized the facts, he begged my pardon and showed me his usual affection, with deeds. 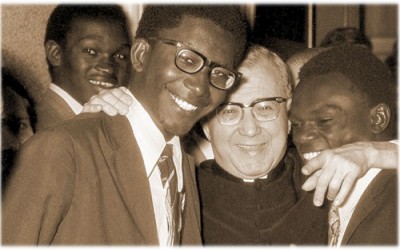 I would say that every time he corrected someone he always added some special sign of affection, which might seem insignificant to a third party. I remember, for instance, what he used to do if he had reprimanded any of us who were working with him in the mornings. After lunch, when we sat down for a bit of family conversation, St Josemaria would come in smiling and holding up a sweet – just one – between finger and thumb. And we always knew straight away that the sweet was for the person he’d corrected before. He’d hand it over accompanied by the sort of affectionate remark he often used to make to his children: ‘Here, dummy,’ or ‘Here you are, rascal.’

Was it pleasant living with him? It’s sometimes said to be hard living with a saint – what would you say?

St Josemaria himself used to say the same sort of thing, when he warned us that we – including himself – should avoid the situation where ‘to put up with one saint, it takes two saints’. I have always understood that to mean that if someone thinks they’re a saint they are hard to live with, because they make their opinions or points of view almost into dogmas of faith. That never happened with St Josemaria. Firstly, because his sanctity – and hence his humility and charity – were absolutely genuine. The magisterium of the Church has confirmed that fact with its own supreme, definitive testimony, although St Josemaria himself always said he was just ‘a sinner who loves Jesus Christ’. And secondly, because he exercised great love for everyone’s personal freedom, and never imposed things on others as dogmas. And when he realized he was wrong about something, he said so, and he ardently defended the freedom of everyone in Opus Dei.

The fact is that cheerfulness is not only compatible with charity but can be one of the best ways of practising it. Among the charismas that God granted St Josemaria was one that might go unnoticed by people who never met him: he could lead people to God up the gentle, steady slope of cheerfulness and good humor. In The Way he wrote that ‘True virtue is not sad or gloomy, but pleasantly cheerful.’ That’s the way he always tried to live. That meant it was great living with him, even though there were times when his tiredness or sickness made itself felt in family life. Such times could be hard, but we all knew that they were like single reefs in a great ocean of affection, peace and joy.

How did he react to objectively difficult things: slander, unfaithfulness to Jesus Christ, or the sickness or death of someone he loved? 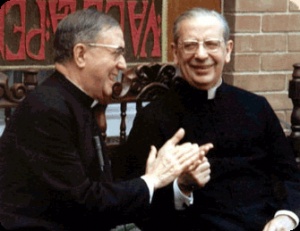 I always saw him react with great supernatural sense, as a man with a big heart and genuine faith. Depending on what the difficulty was, he might be sad if it implied unfaithfulness to Jesus Christ, whether it was a piece of slander, or a lack of generosity towards God. But he applied the method he always advised us to use: ‘Pray, keep quiet, smile, and forgive.’ I remember his suffering, and at the same time his peacefulness, when he received the medical information about the mortal illness of one of the first three priests to be ordained in Opus Dei, Fr Jose Maria Hernandez Garnica. St Josemaria asked me to explain the medical report to him in detail, because it was written in technical language. The two of us were alone together, and when I began to explain the meaning of the diagnosis, and the seriousness of the medical prognosis, St Josemaria broke down and cried. After I finished reading, he said, ‘I’m sorry, my son, about the bad example I’ve set you. But at least you can see that the Father does have a heart.’ And then he said, slowly, savoring it, the prayer he included as point 691 of The Way: ‘May the most just and most loveable Will of God be done, be fulfilled, be praised and eternally exalted above all things forever. Amen. Amen.’ And what about little ordinary, everyday setbacks?

Normally you couldn’t tell that those things affected him at all – things like machines breaking down, power-cuts, personal medical problems, all that. But I think that what looked like him not reacting was actually the result of a supernatural process that included accepting God’s will, fortitude in putting up with discomfort, and detachment from what contributed to his personal convenience, among other things. He realized that these things were ‘passive mortifications’, and he accepted them willingly, out of a desire to sanctify little and ordinary things, which is very much part of the spirit of Opus Dei.

It was different if the difficulty involved a lack of responsibility, carelessness, laziness, etc. on the part of someone he knew. Most often he reacted, sometimes forcefully, to correct and thus help the person concerned, but he did this not because he had been inconvenienced but because it implied an offence against God, or at least a lack of love for God.

What would you like to pass on of your personal experience in Opus Dei, to those who join it in the future?

I’d like to tell them to listen carefully to St Josemaria when he impressed on people that they should fulfill the norms[1] that are part of the spiritual plan of life of the faithful of the Prelature. ‘Fulfill the norms for me!’ he would say endlessly. But as his successor Don Alvaro del Portillo used to explain, it’s also necessary not to fall into merely getting them done. We can’t just tick them off on a list of things we have to get through, we can’t be content with fulfilling the right quantity but not caring too much about the quality. St Josemaria said that each norm has to be a real encounter with Jesus Christ, not just a pious act that we do out of obligation, like getting it over with so we can move on to something else. This is my experience: people need to discover the sanctifying value of each of the norms, by doing them faithfully, with a lot of love for God and the greatest possible concentration. I would tell them to do the norms in such a way that the level of their awareness of God’s presence rises with each norm. Like that, and only like that, they will come to be contemplative souls in the middle of the world, as St Josemaria was.

[1] The norms of Christian devotion practiced by the faithful of Opus Dei aim to help them get to know, relate to and love Jesus Christ more and more. For example, going to Mass, receiving Holy Communion, going to the Sacrament of Reconciliation frequently, reading the Holy Gospel and other spiritual writings, saying the Rosary, spending time in mental prayer, etc.