On June 19 Pope Benedict XVI inaugurated the Year of the Priest, in celebration of the 150th anniversary of the “dies natalis” of St. John Mary Vianney.

On June 19 Pope Benedict XVI inaugurated the Year of the Priest, in celebration of the 150th anniversary of the “dies natalis” of St. John Mary Vianney (1786-1859), the patron saint of parish priests worldwide.

Pope Benedict XVI declared that this year is meant to deepen the commitment of all priests to interior renewal for the sake of a more forceful and incisive witness to the Gospel in today’s world. The Pope quoted a famous phrase from the Curé D’Ars: “The priesthood is the love of the heart of Jesus”, saying that it helped to reflect “the heartfelt gratitude that the Church wants to show for the immense gift which priests represent, not only for the Church, but also for humanity itself.” (Cf. Pope Benedict XVI, Letter proclaiming the Year of the Priest, 16 June 2009)

In a recent letter to the faithful of the Prelature, Msgr. Javier Echevarria, said:

St. John Mary Vianney is the patron and model for sacred ministers because of his immense love for God and his ardent zeal for the salvation of souls. I witnessed our Father’s affection when he once went to Ars to venerate him, and to commend to him the holiness of priests and the relations of Opus Dei with the diocesan bishops. Let us all ask him for the same thing during the coming months. The call to be a priest is a special gift by God to humanity, to enable the fruits of the Redemption to reach souls in all epochs and places. Our Father always stressed its enormous value. The expression, Josemaría, priest, took on a special resonance in his words and writings. "The priesthood is the greatest reality in the world," he said. "One only needs to consider the miracle of bringing Jesus to earth every day. Our Heavenly Mother—how much we have to love her: greater than her, only God!—brought our Lord to earth only once: fiat mihi secundum verbum tuum! (Lk 1:38)."  (Letter from the Prelate, July 2009)

Saint Josemaria had a great devotion to the Curé d’Ars, and named him as one of the intercessors of the Work. He saw the principle role of the priest not that of power, but of service:

“The priesthood leads one to serve God in a state which, in itself, is no better or worse than any other: it is simply different. But the priestly vocation is invested with a dignity and greatness which has no equal on earth. Saint Catherine of Siena put these words on Jesus' lips: I do not wish the respect which priests should be given to be in any way diminished; for the reverence and respect which is shown them is not referred to them but to Me, by virtue of the Blood which I have given to them to administer. Were it not for this, you should render them the same reverence as lay people, and no more... You must not offend them; by offending them you offend Me and not them. Therefore I forbid it and I have laid it down that you shall not touch my Christs.” (Homily “A priest forever” in the book In Love with the Church, # 38)

“I cannot understand why some priests are so eager to be indistinguishable from other Christians, forgetting or neglecting their specific mission in the Church, that for which they have been ordained. They seem to think that Christians want to see the priest as just another man. That is not so. They want to find in the priest those virtues proper to every Christian and, indeed, every honourable man: understanding, justice, a life of work — priestly work, in this instance — and good manners. But the faithful also want to be able to recognise clearly the priestly character: they expect the priest to pray, not to refuse to administer the sacraments; they expect him to be open to everyone and not set himself up to take charge of people or become an aggressive leader of human factions, of whatever shade. They expect him to bring love and devotion to the celebration of the Holy Mass, to sit in the confessional, to console the sick and the troubled; to teach sound doctrine to children and adults, to preach the Word of God and no mere human science which — no matter how well he may know it — is not the knowledge that saves and brings eternal life; they expect him to give counsel and be charitable to those in need. “(Homily “A priest forever” in the book In Love with the Church, # 42) 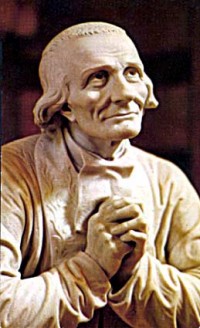