October 2nd is the feast of the Guardian Angels: They Guide us on our Path

The feast of the Guardian Angels and the founding of Opus Dei on October 2nd are two events tied up in God’s providence.

On October 2, 1928, sometime during the morning, one could hear the bells ringing out at the Madrid parish of Our Lady of the Angels. It was a fairly common occurrence; nothing really special for anyone in the area that day. But those few minutes were a turning point in young Josemaria’s life. It was at that precise instant that he saw what God wanted from him, something that would later be called Opus Dei. 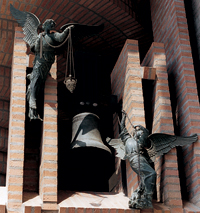 The fact that the founding of Opus Dei fell on the feast of the Guardian Angels strengthened his devotion to these heavenly messengers. This is why he encouraged people to develop their friendship and confidence in their guardian angels, and this devotion became one of the characteristic points of the spirituality of Opus Dei. “I can’t easily forget the ringing of those bells on October 2nd, 1928: the bells of Our Lady of the Angels. My children, in your work, in your interior struggle, in your traveling along this road that goes uphill and has obstacles, know that you are not alone. You have the grace of God, you have the help of our Mother the Blessed Virgin, and you have the holy Guardian Angels.” (1)

The Jewish people too had that protection when they entered into the desert, en route to the Promised Land: See, I am sending an angel before you, to guard you on the way and bring you to the place I have prepared. Be attentive to him and heed his voice. Do not rebel against him (…). If you heed his voice and carry out all I tell you, I will be an enemy to your enemies and a foe to your foes. My angel will go before you. (Exodus 23, 20-23)

Friendship with the Guardian Angels leads one to ask for many spiritual and material favours from them, since they are in a position to win them for us. This is a teaching that is found in the living tradition of the Church and in Christian devotions since the earliest times. St. Josemaria wrote in The Way: 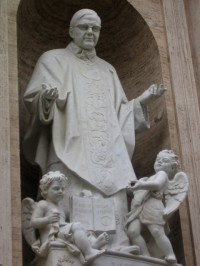 “Drink at the clear fountain of the Acts of the Apostles. In the twelfth chapter, Peter, freed from prison by the ministry of Angels, comes to the house of the mother of Mark. Those inside will not believe the girl, who says that Peter is at the door. Angelus ejus est! It must be his Angel!' they said. See on what intimate terms the early Christians were with their Guardian Angels. And you?” (The Way 570)

St. Josemaria's personal experience of the effectiveness of the intercession of the guardian angels can be found in many points in his writings: “Have confidence in your guardian Angel. Treat him as a lifelong friend — that is what he is — and he will render you a thousand services in the ordinary affairs of each day.” (The Way 562)

Whenever you are in need of anything, or are facing difficulties, whether great or small, invoke your Guardian Angel, asking him to sort the matter out with Jesus, or to do the particular service you may require. (Forge 931)

“You are amazed that your Guardian Angel has done you such obvious favours. And you should not be amazed: that's why our Lord has placed him beside you.” (The Way 565)