This is an exciting story of a group of young Canadians with a sense of adventure. The project led them to fly farther north than they’ve ever been, to the Berens River First Nation in northern Manitoba, Canada.

The Berens River First Nation is located at the mouth of the Berens River, approximately 430 air kilometres north of Winnipeg, on the eastern shore of Lake Winnipeg. There are no permanent all-weather roads connecting this tiny community to the rest of the province. The only way to get there is over the frozen lake, allowing access during the bitter cold months from December to March. The rest of the year, the community of three thousand residents, over half of which are Catholic, can only be reached by air.

The initial facts about this far off destination seemed to make the trip especially exciting for the group of seven Grade 11 boys, an engineer, an engineering student, and a priest, who travelled from Toronto to this stretch in northern Manitoba, for two weeks in August 2005. Having to fly in a small bush plane over a vast expanse of water surrounded by muskeg, woods and wildlife just added to the thrill. Their purpose was to volunteer their time to help in greatly-needed repairs in a local parish, and tutor some of the local children in English, math and religion. 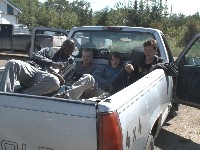 This was the second year in a row that Fr. Rhéal Forest, the pastor at Our Lady of the Snows Parish, had asked Ernescliff College, a student residence in the downtown campus of the University of Toronto, to organize the excursion. He found out about the College through a friend, a priest of Opus Dei. Ernescliff is a centre of Opus Dei that has promoted a number of similar projects over the years in the Toronto area. Along with the spiritual formation offered by some of the priests in the college, organizers have sought to facilitate initiatives where students can find different ways to be useful to the community and learn to give of their time and energies. Often the initiatives are local to the Toronto area but other times projects go further a field. The Berens River project was not going to be some easy vacation for the high school students. Students had to raise the money themselves to pay their way; some worked to save up, others got donations from well-wishers, and some even used air miles that friends and acquaintances offered them.

Fr. Rhéal has been there for ten years. He says that the local schooling (done in English although Ojibway is now also being taught so that the younger generation does not lose it) does not require homework from the students. So he was very surprised when up to 30 boys showed up at 6:30 p.m. for eight days at the school, interested in the tutoring of older boys from Toronto. “I could not believe it! I thought it was not going to work. The tutors were well-balanced young men who drew in the boys to share their joy and gifts. ‘When are they coming back?’ the native boys asked when they left. The parents too wanted to know when they were returning. They really gained their trust. I liked very much the final talk that one of the counsellors gave: he encouraged our boys to get an education, pray every day, stay away from drugs… They all listened.” 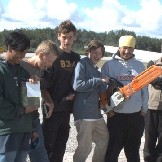 The parish priest had announced the tutoring on local radio, and by phoning parents. The students, 10 to 15 years of age, were brought to the classes in the back of pick-up trucks along an 11-mile driveable road along the elongated reserve. Others arrived by boat.

“It takes time to organize a trip like this, and it inspires a really adventurous attitude in the boys. Some of them found it very rewarding to be able to go to help people in a far-off place in their own country that nobody has even heard of,” said Leslie Tomory, a 30-year-old engineer and doctoral student at the University of Toronto, who is the director of Ernescliff. He went through the careful selection of the candidates and tried to find those that would most profit from the experience. “I hope it will prepare them to have the right attitude of daring and industriousness when they face other adventures in their lives as adults. Facing obstacles is part of life; if I can help ready them for that, I’m happy.”

Once safely settled in the church hall, they followed a daily schedule which consisted of work around the church most of the day. They built breakwaters using stones and wire cages along most of the shoreline, in an effort to prevent the waves of Lake Winnipeg from swallowing any more of the parish’s property. They witnessed the power of the waters one particularly windy day, when the crashing waves eroded a few feet of unprotected shoreline. They swam off an island which the director remembered to be a peninsula the year before.

“Work was tough but not in a bad way. It was enjoyable but difficult,” says Joseph Jalsevac, a student at Toronto’s Brebeuf College School. “It was sad to see the conditions in which the people are living: poor and overcrowded houses. Some of the boys could not read or write, and their math skills were still pretty limited.”

“They were very interested in our life style,” adds Matthew Karabela, from Oakville, Ontario. “They asked a lot of questions, for example about what we did at school and about religion.” Matthew paid for his trip by handing out a letter explaining the project to people he knew. Twelve different donors helped him. He has sent them thank-you letters and photos. The tutoring was well-planned, he adds, by the Kenyan engineering student from McGill University who accompanied them. 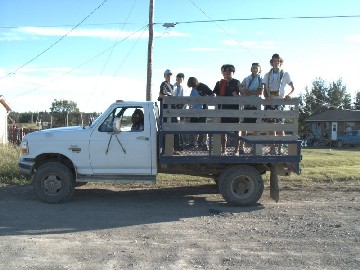 The physical work did not stop with carrying rocks; they also stowed firewood for the church for the coming winter. The most interesting work came after supper every evening when they would go to the local school to tutor students. The people appreciated the efforts to help them, and many responded with enthusiasm. The tutoring was followed by sports, usually soccer and basketball.

The nine days in Berens River were capped off (after a windy and bumpy bush-plane return flight) with a visit to Winnipeg. There they made a trip to Lower Fort Gary, the Hudson’s Bay Company’s regional headquarters in the 19th century, and visited other sites.