With the union of Mary and Joseph, mankind’s history is approaching its culminating moment. The scene of their marriage is the fourth installment in the series on the Life of Mary. 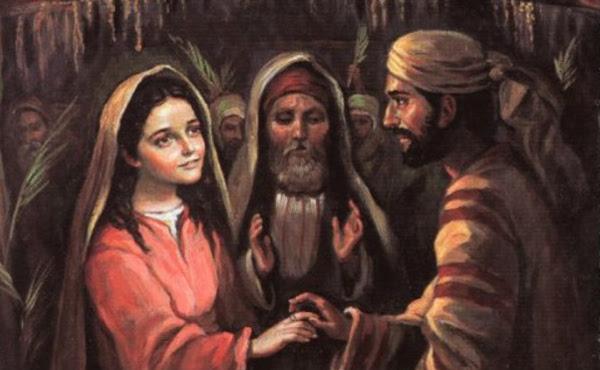 The fullness of time is drawing near. The person predestined to be God's Mother is still unaware of her future role. Mary is now a young woman, and the Holy Trinity has prepared for her a holy marriage to safeguard her virginity. The Son of God made man, Israel's Messiah and the Redeemer of the world, is to be born and brought up in a family.

All the indications point to the fact that our Lady's parents are probably already deceased. Mary was most likely living in the home of a relative who was caring for her. Having reached the age when it was customary in Israel for a young maiden to enter into marriage—about the age of 15—the head of her adoptive family, taking the place of Miriam's father, would have arranged for her union with Joseph, a craftsman from Nazareth.

The Gospels provide few details about Mary's spouse. We know that he, too, was of the house of David, and that he was a just man (Mt 1:19)—that is, a man who walked in the Law of the Lord, and meditated upon it night and day (Ps 1:2). The liturgy applies to him these inspired words: The just man shall flourish like a palm tree, and grow up like a cedar of Lebanon (Ps 91[92]:13).

"How shall this happen, since I do not know man?" (Lk 1:34). Mary's response, when she was already betrothed to Joseph of Nazareth, has only one explanation: Mary was firmly resolved to remain always a virgin.

The Gospel of St. Luke tells us that when the Archangel Gabriel brought God's message that Mary was to conceive a son, she responded: How shall this happen, since I do not know man? (Lk 1:34). Mary's response, when she was already betrothed to Joseph of Nazareth, has only one explanation: Mary was firmly resolved to remain always a virgin. No human motive could justify that decision—quite rare in those days. Every Israelite maiden—even more so if she belonged to the line of David—harbored in her heart the hope of giving birth to the Messiah. The Tradition of the Church sees in Mary's firm determination here the fruit of a very special inspiration of the Holy Spirit, who was preparing her to become the Mother of God. The same Spirit also led her to the man who was to be her virginal spouse.

We don't know how Mary and Joseph met. If Mary, as is quite likely, also lived in Nazareth, a small village in Galilee, they would have met on previous occasions. In any case, before the espousal, Mary must have informed Joseph of her intention to remain a virgin. And Joseph, prepared by the Holy Spirit, must have sensed in this revelation a voice from heaven. Most probably, he too would have felt an interior call to dedicate himself soul and body to the Lord. It is impossible to imagine the harmony that united those two hearts, the interior peace that welled up in their souls after their betrothal.

The Church applies to Joseph, of noble lineage and even more noble in spirit, the praise that divine Wisdom gives to Moses: "He was beloved of God and men, and blessed is his memory" (Sir 45:1).

Everything about this scene in Mary's life is deeply supernatural, and also deeply human. The very simplicity that is so proper to divine realities explains the pious stories that soon grew up around the espousal of Mary and Joseph—filled with wondrous events immortalized in art and literature. According to these sources, when Mary reached the age for marriage, God miraculously showed the priests in the Temple of Jerusalem and all the people the man He had chosen to be Mary's spouse.

The actual fact must have been much simpler. The betrothal ceremony could very well have been in Nazareth. When Mary's family reached an agreement with Joseph, the espousal celebration would have been held, which in the Mosaic Law had the same effect as marriage. After some time had elapsed, the groom was to bring the bride into his own home. It was during this time that the Annunciation took place.

Mary's betrothal with Joseph has great importance in her life. Joseph was descended from the royal house of David and, by virtue of his marriage with Mary, the legal title, son of David, would be conferred upon Mary's child, thus fulfilling the prophecies. The Church applies to Joseph, of noble lineage and even more noble in spirit, the praise that divine Wisdom gives to Moses: He was beloved of God and men, and blessed is his memory (Sir 45:1).

Israel knows nothing about this recently married couple. As always, Joseph keeps silent and Mary is discreet. But God is well pleased and the angels marvel in admiration.