An interview with Fr. Esteben Aranaz, a member of the Priestly Society of the Holy Cross, who is returning from six years of priestly work in Taiwan and on the Chinese mainland.

In the interior of China, north of Beijing, a Spanish priest is giving theology classes in an old ice plant. It’s 2 a.m. The students drink in his lessons on the Catechism of the Catholic Church. They know it will be a long time before they hear something like this again.

After class, they will all return home and the next day go to work like everyone else. Only they and a small group of faithful know that they are seminarians in China’s persecuted Church. As for the teacher, Esteban Aranaz, he will pick up his guitar and continue his role as "visiting musician."

On his trip through China, many "concerts" are awaiting him: classes for seminarians, retreats, Masses for small groups, visits to priests. "Almost always at night, when the police aren’t watching. Fear? That’s irrelevant. No, I’ve never been afraid."

Esteban Aranaz is a diocesan priest who belongs to the Priestly Society of the Holy Cross, an association founded by St. Josemaría Escrivá and united to Opus Dei. For six years he lived in Taiwan and often traveled to the Mainland. Now, he is returning to Spain to be Rector of the Major Seminary of his diocese, Tarazona.

Why did you move from Tarazona to Taiwan?

Our Lord gave me hints little by little. We received news from a nun from our diocese who was living in a cloistered convent in Taiwan. It was clear that so many people there did not yet know Christ.

At Christmas in 1999, I invited a young Chinese friend to my parish. His legal and employment situation in Spain was not very good. Yan was not a Christian but his sincere and generous temperament made our friendship easy.

On Christmas Eve we were in church, where he was helping me prepare for midnight Mass. When he saw the figure of the Child Jesus, he told me that the Child "was telling him" three things: "First, that he comes from heaven, and is not as we are; second, since he is little, he has a Mother who loves him a lot; third, his arms are open because he loves everyone." 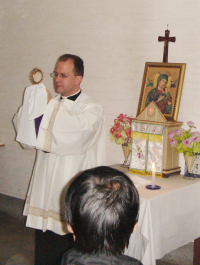 I had been wondering how I could explain the meaning of Christmas to him, but it wasn’t necessary. His simple but deep words moved me and I thought: "How many people in China don’t know you, Jesus." From that moment a great restlessness to go to China was born in my heart.

I began to give it serious consideration in 2000 when John Paul II urged us: "Duc in altum! Put out into the deep!" Those words constantly resounded in my head. At the same time, I was moved by the letter the Prelate of Opus Dei wrote for the start of the third millenium, challenging his sons and daughters to "set more daring goals" in their apostolate.

But you were already a priest…

Yes, but that still didn’t seem enough. I had to make up my mind. So on a trip to Rome, I prayed before a relic of St. Francis Xavier, a saint who left everything to go to Asia. I asked our Lord: "Give me a clear sign if you want me to go to China. It’s not an easy decision."

I had just left the church when a nun from Asia greeted me on the street and said, "Please pray for my country, China." I froze on the spot and replied, "You have no idea how much I do, sister." It was the sign I was waiting for. There was no going back on my words.

When I told my Bishop, he gave me his complete support: "I can’t refuse a service for the universal Church," he said, and I’ve been eternally grateful. 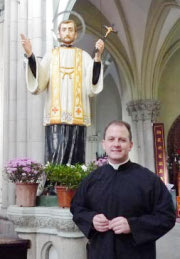 How did you get started?

It was hard, certainly. For the first two years, my days came down to celebrating Mass, studying Chinese, and fulfilling my norms of piety such as the Rosary and prayer. I got a lot out of the Mass, for I came to understand how it was the high point of each day. Since I couldn’t do anything else, I prayed and prayed for those people with whom I couldn’t yet communicate.

Did you suffer much from loneliness?

No, I’ve never felt alone. As a member of the Priestly Society of the Holy Cross, I could go to a center of Opus Dei in Taipei to receive the means of formation and spiritual direction. There I found the strength needed not to become discouraged. I also had the prayers of my family and many friends as spiritual support.

Finally, after those first two years, the archbishop of Taipei entrusted me with a parish of 120 persons, Our Lady of the Miraculous Medal (a devotion St. Josemaría liked a lot). "Whom will I assist?" I asked. "You’ll be the only priest," he replied. I felt a great eagerness to start working.

The first homilies in Chinese were a disaster! But thank God, the faithful were very understanding and helped me out a lot. 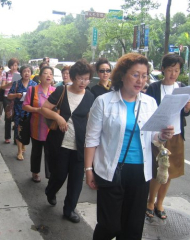 How is the faith of the Taiwanese?

You must understand that in Taiwan, a country of 23 million people, only 1% of the population is Catholic. But they are very proud of being Catholics and have a lively sense of belonging to the Church.

In my time there, we had 32 conversions. I recall with special affection a 58-year-old man with cancer. His family was Catholic, but he had always remained a pagan. They called me from the hospital: "He wants to be baptized." I remember asking him about the truths of the faith: "Do you believe in God the Father? Do you believe in God the Son?.…" And he responded firmly while grasping my crucifix: "Yes, I believe!" When I was about to leave he asked if he could keep the crucifix: "This is my only consolation now," he said. He died soon after in great peace.

On my visits to the sick, I often though about St. Josemaría as he prepared for the foundation of Opus Dei by visiting the dying in Madrid’s hospitals. I know all the hospitals in Taipei very well! There I’ve anointed the dying, baptized and even married people!

How do you explain the Catholic faith to non-believers?

The Taiwanese in general are very respectful of the faith, so it’s easy to talk about it. For the past three years, we’ve had a Corpus Christi procession through the central part of the city. Parishioners prepare a patterned carpet of multi-colored rice. It’s an opportunity to explain the Eucharist to people.

When Christmas was approaching, I wanted to set up a Nativity scene in a public place. This tradition provides a good chance to speak about Christ. One of the main banks in Taiwan is adjacent to the parish church. The entrance to this skyscraper has a small garden—it was the perfect place. I asked two of the faithful to accompany me when I spoke with the person in charge. Before going in, we prayed a Hail Mary that all would go well. It was December 12, feast of Our Lady of Guadalupe. 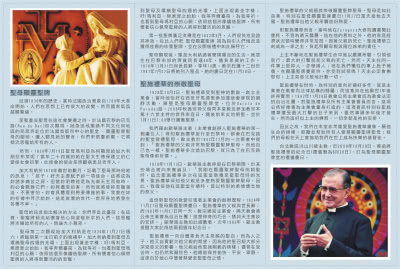 As it turned out, not only were we able to speak with the building administrator, but he immediately gave us permission, and even more, paid for it to be set up!

This religious tradition was quite surprising to many people. But ever since then, the Nativity scene has been set up there each year. It’s a wonderful teaching opportunity.

But your original intention was to go to mainland China.

And I was able to go! After learning Chinese well enough, I got in touch with some communities of the persecuted—or "underground"—Church and was able to visit them. I even had a chance to visit some Christians who live north of the Great Wall.

After getting to know them, I can say that I’ve never seen a stronger faith than that among the persecuted Catholics in China. It’s a faith purified by the Cross, by suffering. They’ve taught me so much. For example, when we celebrated early morning Eucharist in someone’s home, the piety of those people was so moving. For them, the Mass is truly a treasure. 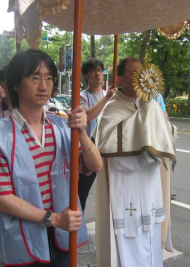 A bishop who has been in prison and is now under house arrest told me: "For the Church to go forward in China, I have three concerns: that we never be afraid, that we are faithful, and that our priests are well formed. Everything else will take care of itself."

That bishop got an orphanage going for 72 abandoned and sick children who had been found on the street. Chinese priests in general are heroic.

How can the Church in China be helped?

But it’s not enough to pray for the Church; we also need to pray for the authorities in China, that they convert. In addition, money is needed to help Chinese priests who can come to Europe to receive training. I also help support the Guan Ming ("Clarity") Foundation, which provides books for the underground seminarians. Recently we’ve been able to send them the first Chinese translation of the complete works of St. Thomas Aquinas—the Summa Theologiae and other writings.

The Bishop of my diocese in Spain opened a seminary and named me Rector. So I’m back in Tarazona to continue serving the Church here. But although I’ve left China, my heart is still there.

the great missionary to Asia.

Eucharistic procession with faithful from the parish in Taiwan.

Leaflet in Chinese on the Miraculous Medal that speaks

about St. Josemaría’s devotion to the Virgin Mary under

Through the streets of Taipei.