A Christian, wherever he is, is called to leave the sweet fragrance of Christ around him. And if he is able, among his own people, in his parish. Here are some illustrations.

Bringing Jesus to his co-parishioners

Before the Covid-19 pandemic broke out, August and another volunteer regularly visited seniors living at home or in two retirement homes. This was a much appreciated opportunity to bring them communion, to pray, to read the Bible and to sing with them.

Married and the father of three grown daughters, the Toronto man does not hide his joy of "bringing Jesus" to his co-parishioners who are limited in their movements and who often "suffer from loneliness, anxiety and even despair”. In this way, friendships are formed that are comforting and supportive. Some of the people visited have Alzheimer's disease: "They need attention, tenderness, love," he says with great humanity.

Of Chinese origin, August celebrated the 10th anniversary of Blessed Trinity Parish - a Chinese parish located in the heart of the Canadian metropolis - with his entire community in 2020. It was the presence of a large community of Chinese immigrants that prompted the archdiocese to create this parish where Mandarin is spoken. Three years ago, the person in charge of the RCIA team invited August to join their team.

“Many immigrants from mainland China were not exposed to any religious faith before coming to Canada, he says. For this reason, the RCIA program lasts 12 to 18 months and is divided into pre-catechumenate, catechumenate and mystagogy, which is an introduction to the mysteries of the Catholic faith. Between 10 and 15 people register each year.”

Over the years, small miracles have happened at Blessed Trinity among the catechumens: "A family on the verge of breaking up because of alcoholism was reconciled in the faith, August recalls. On other occasions, the lives of babies at risk of being aborted were saved. There have also been occasions when the teenagers of some catechumens have joined the catechumenate and become involved in other parishes following their baptism. Yes, real little miracles!” 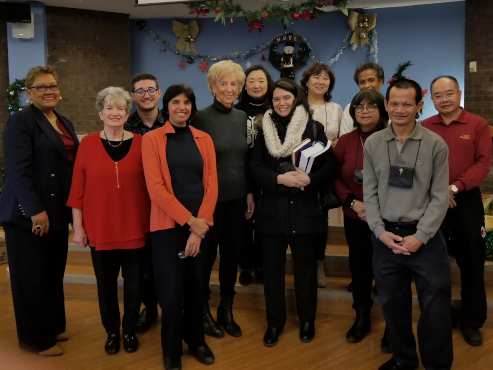 In the service of life

Also in Ontario, at St. Michael's Parish in Bright's Grove, another volunteer shares his joy of developing new friendships while actively participating in the life of the community. Peter has played many roles over the years, from training servers, to being a reader, to even filling in as sacristan! “Seeing the joy of the young people assisting the priest who makes the sacrifice of the Mass present gives me a great sense of accomplishment”, he says.

Peter has been a member of the Knights of Columbus for 38 years. As president of the pro-life committee of his parish, he has multiplied the initiatives to protect life at all its stages in order "to keep parishioners engaged in the fight for the right to life". He and his wife have raised considerable sums of money to support a care center for the elderly and a center to help pregnant women in difficulty. He insists on the importance of supporting our priests and pastors: "It is more important than ever to pray for them and to show them our fraternal presence.”