Commentary on the Gospel: The Epiphany

Gospel for the feast of the Epiphany (Year ABC), and commentary. 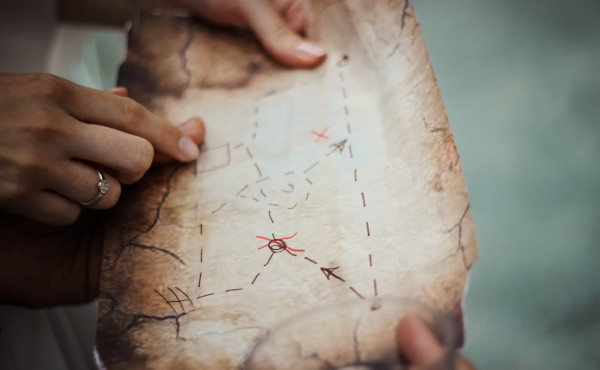 Now when Jesus was born in Bethlehem of Judea in the days of Herod the king, behold, wise men from the East came to Jerusalem, saying,

“Where is he who has been born king of the Jews? For we have seen his star in the East, and have come to worship him.”

When Herod the king heard this, he was troubled, and all Jerusalem with him; and assembling all the chief priests and scribes of the people, he inquired of them where the Christ was to be born.

They told him, “In Bethlehem of Judea; for so it is written by the prophet:

‘And you, O Bethlehem, in the land of Judah,
are by no means least among the rulers of Judah;
for from you shall come a ruler
who will govern my people Israel.’”

Then Herod summoned the wise men secretly and ascertained from them what time the star appeared; and he sent them to Bethlehem, saying,

“Go and search diligently for the child, and when you have found him bring me word, that I too may come and worship him.”

When they had heard the king they went their way; and lo, the star which they had seen in the East went before them, till it came to rest over the place where the child was. When they saw the star, they rejoiced exceedingly with great joy; and going into the house they saw the child with Mary his mother, and they fell down and worshiped him. Then, opening their treasures, they offered him gifts, gold and frankincense and myrrh. And being warned in a dream not to return to Herod, they departed to their own country by another way.

Saint Matthew tells us that when some gentiles came from the East to adore the Messiah, it caused widespread unrest in Jerusalem; and especially in Herod the Great, who had finally obtained the title of king from Rome after many political intrigues. However, a number of prophecies from the Old Testament had already foretold these events: a star would announce the Messiah’s birth (cf. Num 24:17); and the birth would take place in Bethlehem (cf. Mic 5:1), as the chief priests and scribes informed Herod. It was also written that foreigners would come to adore him (Is 49:23; Ps 72:10-14), with camels and dromedaries laden with gold and incense (Is 60:5-6; Ps 72:15).

Matthew does not specify the identity, number, or place of origin of these mysterious figures, nor does he say much about the star. The “wise men” or Magi were educated people who investigated the properties of the natural world and gave advice to pharaohs and kings (cf. Ex 7; Jer 39). They often used the arts of divination and wizardry with the intention of obtaining important information. During the Babylonian exile, the prophet Daniel won prestige as a Magus along with Ananias, Misael and Azarias in the royal court, where there were many astrologers and interpreters of dreams (cf. Dan 1). Saint Jerome says that the Magi were likely descendants of Balaam and knew through him the prophecy of the star that was to appear (cf. In Matthaeum, 2). The Armenian apocryphal gospel spread the tradition of there being three Magi, named Melchor, Gaspar and Balthasar.

The “East” in this passage perhaps referred to Chaldea, Persia or Babylonia. And the star has been explained as a comet, a conjunction of planets, a supernova, etc. Great events in history and important births were often tied to astral phenomena. But Saint John Chrysostom thought that the star was in reality an angel (cf. Homiliae in Matthaeum, hom. 6).

In any case, thanks to the star, the Magi knew that the king of the Jews had been born. And they set out from the East, with daring and faith, on a risky and costly journey. After a long search, they were filled with immense joy on finding the child, and prostrated themselves in adoration and offered their gifts. Through their study of nature, and through the Scriptures, the Magi were led to discover the birth of the Son of God. They thus became a model of faith for all those who seek God: “they announce and inquire, they believe and seek, as an image of those who walk in the faith and long to see,” Saint Augustine said.[1]

Thanks to their humility, the manifestation (epiphany) of God came about, and they recognized him in a small Child. “Anyone wishing to enter the place of Jesus’ birth has to bend down,” Pope Benedict XVI once said. “If we want to find the God who appeared as a child, then we must dismount from the high horse of our ‘enlightened’ reason. We must set aside our false certainties, our intellectual pride, which prevents us from recognizing God’s closeness.”[2] And Saint Josemaria said: “As you kneel at the feet of the child Jesus on the day of his Epiphany and see him a king bearing none of the outward signs of royalty, you can tell him: ‘Lord, take away my pride; crush my self-love, my desire to affirm myself and impose myself on others. Make the foundation of my personality my identification with you.’”[3]

The gifts offered by the Magi were not meant to solve any immediate needs, but rather symbolized the adoration the Child God merits. Saint Gregory exhorted: “We will offer gold to this new King, if we shine forth before him with the light of wisdom; incense, if through our prayers we breathe forth a fragrant odor in his presence; and myrrh, if we mortify our sensuality with abstinence.”[4]