The first of the reflections for each day of Holy Week. The topics for Palm Sunday are: our Lord’s entrance into Jerusalem; the donkey: the one closest to Jesus; grasping how God reigns 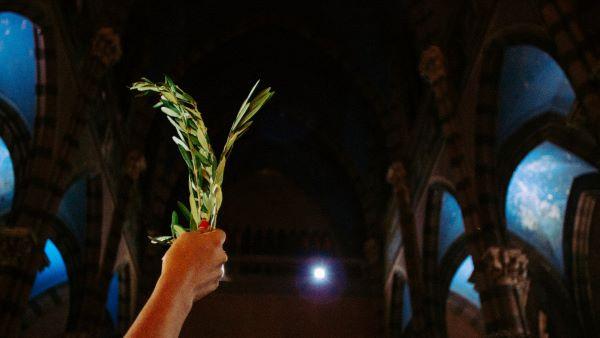 OUR LORD ENTERS Jerusalem amid great acclaim. The One who had always opposed any public display of praise, who had hidden when the people wanted to make him King, today lets himself be brought into the Holy City in triumph. Only now, when he knows death is near, does he agree to be hailed as the Messiah. Jesus knows that, in reality, he will reign from the Cross, since the same people who now joyfully acclaim him will soon abandon him and lead him to Calvary. The palms will become whips; the olive branches, thorns; the cheers, merciless jeers.

The liturgy, with the ceremony of the blessing of the palms and the texts of the Mass (including the account our Lord’s Passion), shows how closely united joy and suffering are in Christ’s life. Saint Bernard points to the close union between laughter and lamentation on this day. The Church “shows us today the new and marvelous union between the passion and the procession; the procession produces acclaim, the passion, lamentation.”[1]

Saint Josemaría said: “‘The palm leaves,’ writes Saint Augustine, ‘symbolize homage, for they stand for victory. Our Lord is on the point of conquering by dying on the Cross. Under the sign of the Cross, he is about to triumph over the devil, the prince of death.’ Christ is our peace because he is the Victor.”[2] Reading the account of the Passion presents us with many persons who played a role in that scene, few of whom suspected the victory Christ would soon attain. We can ask ourselves this week as we relive these events: “Where is my own heart? Which of these people do I resemble?”[3] How strong is my faith when I contemplate the crucial events the Church invites us to appreciate more fully during these days?

THE SCENE OF JESUS’ triumphal procession contains another striking contrast. Amid the people’s loud and superficial enthusiasm, the silent figure of a faithful and obedient donkey stands out, who is carrying our Lord. “A donkey was Jesus’ throne in Jerusalem. Look how wonderful it is to serve as a throne for our Lord.”[4] The humble animal, trotting as gracefully as he can, walks on the cloaks the people have spread on the road to honor Jesus’ arrival—some possibly of expensive silk and fine linen, worn by important people. But while the others offer objects, the donkey gives himself. He carries the gentle weight of Jesus on his rough back. The people run beside him, waving olive branches, palms and laurels. But no one, not even the apostles themselves, is as close to our Lord as the donkey is.

“If Jesus’ reign in my soul, in your soul, meant that he should find it a perfect dwelling place, then indeed we would have reason to despair. But ‘fear not, daughter of Sion; beloved, your king is coming, sitting on an ass' colt.’ Don’t you see? Jesus makes do with a poor animal for a throne. I don't know about you; but I am not humiliated to acknowledge that in the Lord’s eyes I am a beast of burden: ‘I am like a donkey in your presence, but I am continually with you. You hold my right hand,’ you take me by the bridle … A donkey lives on a meagre diet, is hardworking and has a quick, cheerful trot. There are hundreds of animals more beautiful, more deft and strong. But it was a donkey Christ chose when he presented himself to the people as king in response to their acclamation. For Jesus has no time for calculations, for astuteness, for the cruelty of cold hearts, for attractive but empty beauty. What he likes is the cheerfulness of a young heart, a simple step, a natural voice, clean eyes, attention to his affectionate word of advice. That is how he reigns in the soul.”[5]

During this Holy Week, we too would like to be more attentive to God’s voice. We don’t want to miss any gesture, any word, any sentiment of Jesus during these days that give meaning to our own lives.

“WHAT IS REALLY HAPPENING in the hearts of those who acclaim Christ as King of Israel? Clearly, they had their own idea of the Messiah, an idea of how the long-awaited King promised by the prophets should act. Not by chance, a few days later, instead of acclaiming Jesus, the Jerusalem crowd will cry out to Pilate: ‘Crucify him!’, while the disciples, together with others who had seen him and listened to him, will be struck dumb and disperse. The majority, in fact, were disappointed by the way Jesus chose to present himself as Messiah and King of Israel. This is the heart of today’s feast, for us too.”[6]

The experience of those who received Jesus with palms that day can help us to consider what our own idea of Jesus is, what our idea of his reign is. It may happen, for example, that we are sometimes disappointed at how the redemption is being carried out, at its apparently slow pace. Sometimes we want God to triumph quickly, confusing our plans with his. We resist accepting that God is determined not to compromise our freedom nor that of those around us. His love is so refined that it is never imposed. He refuses to take advantage, for example, of the people’s acclaim for his own benefit.

“The heart of Jesus was moving on another track, on the sacred path known to him and the Father alone: the path that leads from ‘the form of God’ to ‘the form of a servant,’ the path of self-abasement born of obedience ‘unto death, even death on a cross’ (Phil 2:6-8). He knows that true triumph involves making room for God.”[7] It means making room for the silent and yet powerful action of God, who makes all things new through the Son’s love for the Father.

And on this path we find the first and most faithful follower of Jesus, his mother Mary. “She is not to be found amid the palms at Jerusalem … But she doesn’t flee from the contempt at Golgotha; there she stands, juxta crucem Jesu, beside his Cross.”[8] And we, by an undeserved grace, can be close beside her.