As in a Film: In the House of Zacchaeus

A new article in the series "As in a Film." A Gospel scene that it is easy to imagine as if it were part of a film is Christ’s encounter with Zacchaeus in Jericho. 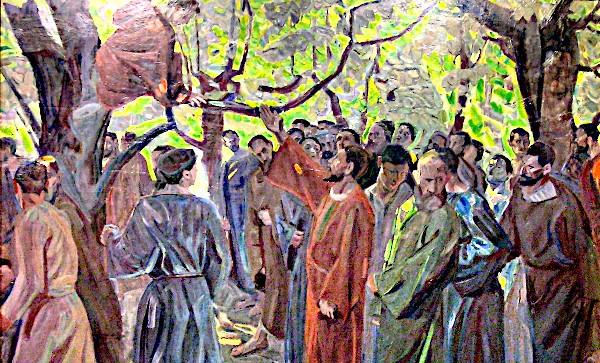 Zacchaeus would have been content simply to see Jesus. But it was beyond his expectations when the Master asked him to stay in his home. Is there any greater joy than having God himself as a guest in your home?

A Gospel scene that it is easy to imagine as if it were part of a film is Christ’s encounter with Zacchaeus in Jericho (cf. Lk 19:1-9). As soon as our Lord passes through the city gates, word spreads rapidly: “The Master is here! He has arrived!” Everyone wants to see Him and listen to his words. Besides the ordinary townspeople, an important man named Zacchaeus also wants to see Jesus. Saint Luke portrays him with great realism. He is rich and the head of the publicans, so we can imagine that he did not enjoy high esteem, since his job meant collaborating with the occupying authorities in the collection of taxes. The Evangelist also mentions his physical appearance: he was small of stature. Zacchaeus eagerly wants to see Jesus. But his height prevents him from doing so because of the crowd surrounding the Master.

The desire for God

Although he usually tried to keep up the appearance that his office demanded, Zacchaeus doesn’t mind looking ridiculous if it means getting a chance to see Jesus. He follows along with the crowd and ends up climbing a tree. That’s how great his desire is to get to know the Master. He refuses to be overcome by difficulties. He is willing to sacrifice even his own respectable image and be seen eagerly climbing the tree and peering through the branches. His interest in seeing Jesus goes far beyond mere human curiosity. What Zacchaeus is seeking, whether he realizes it or not, is the truth. He is seeking above all the truth of his own life.

When Jesus passes under the tree, He “looked up and said to him, ‘Zacchaeus, make haste and come down; for I must stay at your house today’” (Lk 19:5). That exchange of looks must have been an unforgettable moment. Our Lord looks him directly in the eye. Perhaps some of those accompanying Jesus said with an ironic tone: “Look at Zacchaeus, the head of the publicans, sitting in that tree.” But Zacchaeus doesn’t care what others think. He realizes Jesus is looking at him intently, seeing right into his soul. It is the beginning of his conversion. Zacchaeus wants to see the truth about himself through the merciful eyes of Jesus.

Zacchaeus’ expectations have been greatly exceeded. He would have settled for simply seeing the Master. He could never have imagined Jesus stopping to look him in the eye and address him by his own name. And He even wants to stay in his home! This is yet one more sign that Jesus never lets Himself be outdone in generosity. He knows all about Zacchaeus’ eagerness and determination to see Him, and therefore He lets himself be seen. For Jesus, someone's sincere desire to seek Him is enough for Him to draw close to them: “Where is your desire for God? For that is what faith is: the desire to find God, to be with Him, to be happy with Him.”[1]

He received Jesus in his home

Saint Luke says that Zacchaeus, on hearing Jesus’ request, “made haste and came down, and received him joyfully” (Lk 19:6). When we eagerly seek out our Lord’s presence, the result is always joy and happiness.

Many of the Jews viewed what Jesus was doing—entering the house of a chief tax collector—in a bad light. The criticisms were not long in coming: “He has gone in to be the guest of a man who is a sinner” (Lk 19:7). But Jesus is not concerned about upholding social prejudices. His only concern is souls, and that is what he sees in Zacchaeus: a soul to be saved, a soul with the desire to know the truth.

How diligent Zacchaeus would have been in treating our Lord as an honored guest! He would have shown Him all the signs of respect and gratitude that help create an atmosphere of cordiality and rejoicing. He would also have paid close attention to everything the Master said. Only someone who is truly seeking the truth can accept our Lord’s teachings and confront his own life with them. Zacchaeus was deeply grateful to Jesus for wanting to enter his home and bring light for his life.

So clear is the truth of our Lord’s words, so kind is each of his gestures, that Zacchaeus’ heart is deeply touched. It is the moment of his conversion. And in this joyful atmosphere he declares: “Behold, Lord, the half of my goods I give to the poor; and if I have defrauded any one of anything, I restore it fourfold” (Lk 19:8).

A conversion without calculations

No one had asked him to be so generous. He decides to do so because he truly wants to. He doesn’t feel coerced. He’s the one who freely makes that decision. Accustomed to thinking in monetary terms, he doesn’t stop at petty calculations, since he isn’t responding to a demand but freely taking the initiative. His decision doesn’t seem heroic to him. He is astonished at our Lord’s goodness, and therefore everything he can do seems little to him. In short, he doesn’t decide to give something, but to give himself. What he has decided to do is to love, to correspond to our Lord’s love. Zacchaeus isn’t merely being generous. He has begun to live for love.

“I opt for God because I want to, freely, without compulsion of any kind. And I undertake to serve, to convert my whole life into a means of serving others, out of love for my Lord Jesus.”[2] An act of this kind is only possible if one is happy to do it. Zacchaeus responds in this way because he is cheerful, grateful and amazed, and doing so fills him with happiness. It has rightly been said that “joy is not a virtue distinct from charity, but an act, or effect, of charity.”[3] Therefore, “realizing that we are free to love floods our soul with joy, and with it good humor.”[4] Those who have made the choice to give themselves are cheerful: “The word ‘happy’ or ‘blessed’ thus becomes a synonym for ‘holy.’ It expresses the fact that those faithful to God and his word, by their self-giving, gain true happiness.”[5]

The people are amazed at the surprising statement by the head of the publicans. It goes far beyond strict duty. Perhaps one of the guests thinks that it makes no sense humanly. But we know Jesus’ answer: “Today salvation has come to this house, since he also is a son of Abraham.”

The joy of making our Lord joyful

Our Lord’s answer is not a cold statement of a fact. Jesus is a true man, and therefore has strong feelings. He has compassion on the crowds that are like sheep without a shepherd (cf. Mt 9:36). He is outraged at the merchants who carry out business transactions in the temple (cf. Jn 2:14-17). He is deeply saddened by the misfortune of the widow who has lost her only son (cf. Lk 7:11-17). He is moved by the woman who puts her two coins in the temple’s treasury (cf. Mk 12:41-44). He grieves over the death of his friend Lazarus (cf. Jn 11:35) and is amazed at his Father’s marvelous deeds.

Also on this occasion Jesus must have been deeply moved. Our Lord witnessed Zacchaeus’ generosity and conversion, but He also saw how the Holy Spirit acted in the soul of that sinner. Zacchaeus can make such a generous resolution because the Paraclete has inspired him to do so. Jesus sees the marvel of the divine action that guides and helps each person, respecting their free will. It seems that the initiative is taken by the person who decides to convert. But in reality it is the divine call to conversion that comes first, the silent work of the Holy Spirit, who prompted Zacchaeus to climb the tree.

Jesus, who witnesses all this, is filled with joy. It is evident in his cheerful face, in the tone of his voice, in his eyes shining with emotion. And Zacchaeus realizes this. Added to his joy from seeing Jesus and listening to his words, from experiencing his consideration in entering his house, there is now added the joy of having been able to make our Lord joyful. To bring God joy and rejoice with God: what more could one wish for?