Homily of Monsignor Fernando Ocáriz at the Mass for the feast of Saint Josemaría on June 26th, at the Basilica of Saint Eugene in Rome. 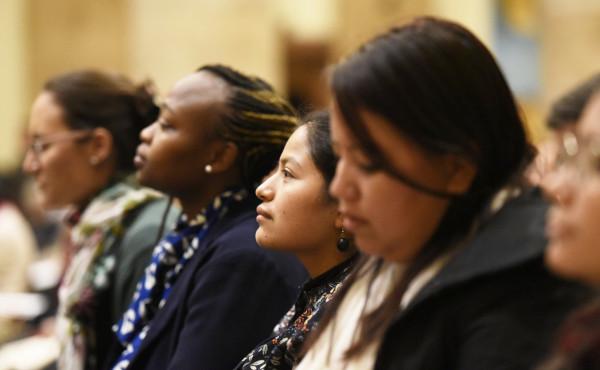 In the Gospel that we have just heard, Saint Luke tells us that "the multitude gathered around Jesus to hear the word of God" (Lk 5:1). On that day, many people crowded around Christ, so many that it was difficult for everyone to hear Him clearly. They were on the shore of a lake, and there was no hill nearby for Jesus to speak from, as He had done on other occasions. So He decided to get into a boat and move a little away from the shore. Our Lord knew the hearts of those people perfectly well; although some came out of curiosity, others by chance, and still others with a real thirst for God, Jesus knew that all of them needed His word to discover the meaning of their lives.

In contemplating Christ and his desire to be seen by the multitude seeking Him, we can ask ourselves: Is this just a scene from the past? Jesus surrounded by so many people: Isn't this just an image of a world that no longer exists today?

Saint Josemaría, whose feast we are celebrating today, meditated on this same passage and concluded that what happened two thousand years old continues happening today. Everyone "wants to hear God's message, even though outwardly they may not show it"; all men and women, although they often lack the words or the strength to express that desire, are "longing to quench their thirst with the teachings of Our Lord" (Friends of God, no. 260 ff.). Recent Popes have expressed themselves in similar ways. Pope Francis, for example, invites us to make Jesus known to those who are "quietly seeking God, led by a yearning to see his face" (Evangelii gaudium, no. 15). Benedict XVI, after comparing our day and age to a desert that longs to refresh itself with living water, said that "there are innumerable signs, often expressed implicitly or negatively, of the thirst for God, for the ultimate meaning of life" (Homily, October 11, 2012).

There are so many testimonies of people who, when they discover the joy that comes from the Christian way of life, react by saying, "But I never knew about it! No one ever told me! I thought Christianity was something else!" That is why the scene Saint Luke describes for us does not belong to the world of the past. People want to crowd around Jesus because they are constantly looking for good and beautiful things to fill their hearts; in the depths of our soul, we all have longings that only He is able to satisfy. Let us ask God to enable us to recognize that longing for His face, those signs of thirst for Christ in other men and women. Let us ask God that we may know how to make present His true image to those around us; the image of that Christ who moves away from the shore so that everyone, even the furthest away, can see and hear Him.

At the end of this Gospel passage, Jesus invites Peter, James and John to follow him as disciples. It is impressive to think that, just a few years later, their apostolic zeal will have taken the Good News to many important places of their world, including Rome. The first Christians, despite facing persecutions and misunderstandings, knew that the world belonged to them. In the second reading, Saint Paul clearly proclaims the conviction that filled them with confidence: "We are children of God, and if children, then heirs, heirs of God" (Rom 8: 16-17).

Indeed, this world is part of our inheritance. In the first reading, we heard that God placed man in the world "to cultivate and care for it" (Gen 2:15). And in the psalm that we sang (and that Saint Josemaría prayed every week) we are told that, through Christ, we have all the nations as our inheritance and that the whole earth is ours (cf. Ps 2:8). Sacred Scripture tells us clearly: this world is ours; it is our home, our task, our homeland.

Therefore, knowing that we are children of God, we cannot feel like strangers in our own home; we cannot go through life as visitors in a strange place, or walk the streets with fear, as though treading on uncharted territory. The world is ours because it belongs to our Father God. As Saint Thomas Aquinas taught, everything is subject to God's all-powerful government; nothing escapes His mercy, even though often we cannot see this (Summa, I, q. 103, a.5). We are called to love this world, not another one that we might prefer; we can only love the specific people around us, the actual challenges that we face. An apostolic task cannot be undertaken with the resignation of a person who says they would prefer something else.

When Saint Josemaría invited us to love the world passionately, he often warned against the "mystical wishful thinking" of placing conditions on the field one needs to evangelize, thinking: "I wish things were different." Let us ask Our Lord for the capacity to be hopeful in the mission He has entrusted to us, like a son or daughter who is enthused to carry out the work needed in their own home.

On this day when we look in a special way to Saint Josemaría, we can be inspired by his example of faith in launching seemingly impossible enterprises, in a situation that, in many respects, was more complicated and difficult than ours. Let us allow Saint Josemaria's trust in God to enter our hearts, in order to love the world that we have received as an inheritance, and strive to satisfy the longing for Christ in so many people around us. To do so, we rely especially on the mediation of Our Mother Mary, who watches over the happiness of all her children with motherly love and patience. Amen.