Easter: "I have risen and am still with you"

"During this time the Church already experiences the joy that our Lord has prepared for us: 'something that no eye has seen, nor ear heard, nor the heart of man conceived.'" 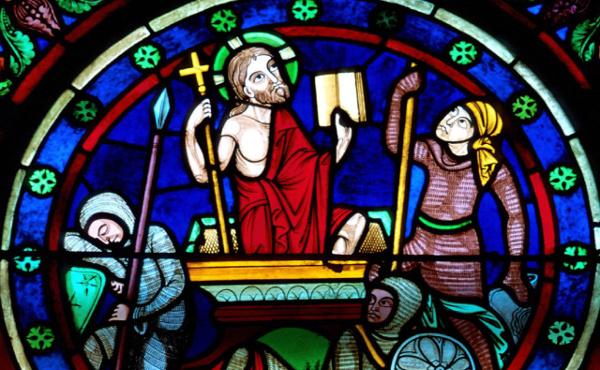 “Come, you blessed of my Father; receive the kingdom prepared for you from the foundation of the world, alleluia.”[1] The Easter season is an anticipation of the happiness Christ has won for us with his victory over death. Our Lord was put to death for our trespasses and raised for our justification,[2] so that, by abiding in him, our joy might be complete.[3]

The Paschal season stands at the summit of the liturgical year because the Christian message is the joyful announcement of the salvation brought about by our Lord’s “passover,” his passage from death to new life. “Easter is a time of joy—a joy not confined to this period of the liturgical year, but to be found really and fully in the Christian’s heart. For Christ is alive. He is not someone who has gone, someone who existed for a time and then passed on, leaving us a wonderful example.”[4]

Although only the few who were chosen by God as witnesses[5] were present at the appearances of the Risen Christ, the liturgy now enables us to re-live these mysteries. As Pope St. Leo the Great preached, “All the things relating to our Redeemer which were previously seen, have now become sacramental rites.”[6] The Eastern Christians’ custom of exchanging the paschal greeting expresses their awareness of this reality. The greeting “Christos anestē, Christ is risen!” is answered with “Alethōs anestē, Truly, He is risen!”

The Latin liturgy pours out its joy in the Exultet of the Easter Vigil. On Easter Sunday, in the beautiful Introit, it expresses this joy more succinctly: “I have risen and I am with you still. You have laid your hand upon me. Too wonderful for me, this knowledge.”[7] We reverently put in our Lord’s mouth, in the form of a burning filial prayer to the Father, the inexpressible experience of his Resurrection at first light on that Sunday morning. Saint Josemaria in his preaching encouraged us to draw close to Christ, to grasp deeply the reality that he is alive today. “I wanted to review with you, briefly, some of the ways in which Christ is alive today—Jesus Christ, yesterday and today, yes and forever (Heb 13:8)—because this is the basis of all Christian living.”[8] Our Lord wants us to talk with him, and talk about him, not as a figure in the past, as someone we remember, but perceiving his “today,” his presence here and now, his living companionship.

The fifty days of Eastertide

Long before Lent and the other liturgical seasons were introduced, the Christian community already celebrated these fifty days of joy. If anyone did not express their jubilation during these days, they were seen as failing to grasp the very heart of the faith, for “with Christ joy is constantly born anew.”[9] This feast, so extended in time, makes us realise that the sufferings of this present time are not worth comparing with the glory that is to be revealed to us.[10] During this time the Church already experiences the joy that our Lord has prepared for us: something that no eye has seen, nor ear heard, nor the heart of man conceived.[11]

This awareness of the last things, the anticipation of heaven, has for centuries been reflected in liturgical praxis. The Easter period has no Old Testament readings, since the entire Old Testament was a preparation, a figure of what was to come; but Eastertide celebrates the Kingdom of God already present. During Easter everything has been renewed and everything is fulfilment. Hence during Eastertide, along with the Gospel of Saint John, the liturgy proclaims the light-filled books that are especially suitable for these days: the Acts of the Apostles and Revelation.

Christian writers of both East and West think of Eastertime as one unique and prolonged feast-day, and so the Sundays are called Sundays of Easter, not Sundays after Easter. The whole Easter period is like one great Sunday—the Sunday that made all other Sundays. For the same reason Pentecost Sunday is not considered a separate feast, but rather the conclusion of the great feast of Easter.

In some traditional liturgical hymns for Lent the word “Alleluia” is used in a tone of farewell. In contrast, the Easter liturgy says “Alleluia” with a new sense of rejoicing, as an anticipation of the “new song” the baptised in heaven will sing,[12] who already see themselves as risen with Christ. Therefore during Easter both the Responsorial Psalm and the Antiphons at Mass so often repeat “Alleluia!”—a word derived from imperative of the Hebrew verb hallal (praise) and Yahweh (the name of God): “Praise God.”

“The first eight days of Easter Time constitute the Octave of Easter and are celebrated as Solemnities of the Lord.”[15] In the early Church, the Bishop of Rome celebrated the “Stations” as a way of introducing the newly baptised to the triumph of the saints who held special meaning for the Christians in Rome. It was a “geography of the faith,” as it were, in which Christian Rome appeared as a reconstruction of our Lord’s Jerusalem. Seven Roman basilicas were visited: for the Easter vigil the “Station” was held at Saint John Lateran; on Easter Sunday it was at Saint Mary Major; Monday at Saint Peter’s at the Vatican; Tuesday at Saint Paul’s Outside the Walls; Wednesday at Saint Lawrence Outside the Walls; Thursday at the Basilica of the Holy Apostles; Friday at Our Lady of the Martyrs; and Saturday at Saint John Lateran again.

The readings for each day related to the place of celebration. For example on Wednesday the Station was at Saint Lawrence Outside the Walls. The Gospel for that day used to be the passage about a charcoal fire,[16] a clear reference to the popular Roman tradition that the deacon Lawrence suffered martyrdom by being roasted on a grid-iron. The Saturday of the octave was the day on which the newly baptised wore their white baptismal garments for the last time before they put them away, and the first reading was Saint Peter’s exhortation beginning with the words: “Deponentes igitur omnem malitiam... Put away all malice and all guile and insincerity…”[17]

The Fathers of the Church often refer to Sunday as the “eighth day.” Set within the sevenfold succession of days in a unique and transcendent position, Sunday evokes not only the beginning of time but also its end in the age to come.[18] Thus the early baptisteries, such as that of Saint John Lateran, were octagonal; the catechumens arose from the baptismal pool to begin their new life, open now to the eighth day, the Sunday without end. Every Sunday thus reminds us that our life takes place during the time of the Resurrection.

“By his ascension, the Risen Lord draws the gaze of the Apostles—and our gaze—to the heights of Heaven to show us that the end of our journey is the Father.”[19] The time of a new presence of our Lord begins. It seems as if He is more hidden, but in a certain way He is closer to us. The “time of the liturgy” begins, with the entire liturgy becoming an extended prayer to the Father, through the Son in the Holy Spirit: a prayer with a “broad and peaceful flow.”[20]

When Jesus disappeared from the Apostles’ sight, perhaps they were speechless at first. “We do not know whether at that precise moment they realised that a magnificent, infinite horizon was opening up before their eyes: the ultimate goal of our earthly pilgrimage. Perhaps they only realised this at Pentecost, in the light of the Holy Spirit.”[21]

“Almighty ever-living God, who willed the paschal mystery to be encompassed as a sign in fifty days…”[22] The Church teaches us to recognise this number as filled with meaning in revelation. The number fifty has two important occurrences in the life of Israel: one was the feast of Pentecost, fifty days after the start of the wheat harvest; and the other the Jubilee declared every fifty years, a year dedicated to Yahweh in which each person could recover their property and each could return to their family.[23] In the time of the Church, the “sign” of Paschal time includes the fifty days from our Lord’s resurrection until the coming of the Holy Spirit at Pentecost. In the language of the liturgy, Lent implies conversion to God with our whole soul, our whole mind, and our whole heart; while Easter means our new life, “co-risen” with Christ. “Igitur, si consurrexistis Christo, quae sursum sunt quaerite”; if, then, you have been raised with Christ, seek the things that are above, where Christ is, seated at the right hand of God.[24]

After these fifty days, “we come to the peak of all blessings and the ‘metropolis,’ the capital of all feasts;”[25] for, inseparable from Easter, it is like the “mother of all feasts.” As Tertullian said to the pagans, “Put all your feast-days together, and they will not add up to the fifty days of Pentecost.”[26] Pentecost is, then, a conclusive Sunday, Sunday in its fullness. On this Solemnity we experience, in astonishment, how through the liturgy God makes present the gift of the Spirit that happened at the dawn of the Church. At the Ascension, Jesus “was taken up to heaven ... that He might make us sharers in his divinity.”[27] And now, at Pentecost, our Lord, seated at the right hand of the Father, gives his divine life to the Church through the outpouring of the Paraclete, “the fruit of the Cross.”[28] Saint Josemaria lived, and encouraged us to do likewise, with a deep awareness of the Spirit’s perpetual presence: “Ask with me for a new Pentecost which will once again set the world alight.”[29]

We can also understand why Saint Josemaria decided to start some of the means of formation in the Work with the Church’s traditional prayer, found for example in the votive Mass of the Holy Spirit: “Deus, qui corda fidelium Sancti Spiritus illustratione docuisti, da nobis in eodem Spiritu recta sapere, et de eius semper consolatione gaudere.” O God, who has taught the hearts of the faithful by the light of the Holy Spirit, grant that by the same Spirit we may be truly wise, and ever rejoice in his consolation.[30] In these words of the liturgy we implore God the Father that the Holy Spirit may make us capable of appreciating, of “relishing,” the meaning of divine realities; and that we may enjoy the encouraging consolation of the “Great Unknown,” an expression Saint Josemaria often used for the Holy Spirit. For “the world needs the courage, hope, faith and perseverance of Christ’s followers. The world needs the fruits, the gifts of the Holy Spirit, as Saint Paul lists them: ‘love, joy, peace, patience, kindness, goodness, faithfulness, gentleness, self-control’ (Gal 5:22). The gift of the Holy Spirit has been bestowed upon the Church and upon each one of us, so that we may live lives of genuine faith and active charity, that we may sow the seeds of reconciliation and peace.”[31]

[15] Roman Missal, “Universal Norms on the Liturgical Year and the General Roman Calendar,” no. 24.

[27] Roman Missal, Preface of the Ascension.