A Life in Dialogue with Others

A new article in the series on developing a strong Christian personality. "Openness to others is closely united to our progress in the lifelong battle to unmask the face of pride and grow in humility. Pride seeps into the most surprising nooks and crannies of our relationships with others." 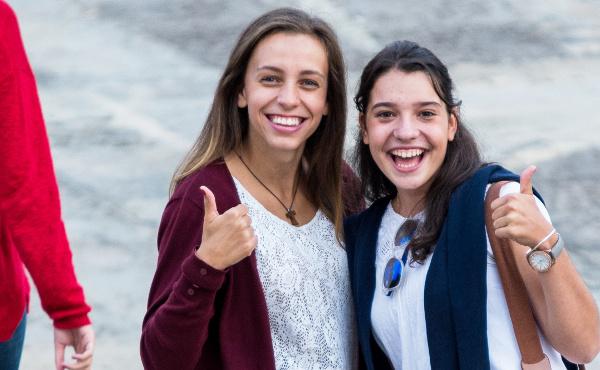 The kiln tests the potter’s vessels; so the test of a person is in his conversation. The fruit discloses the cultivation of a tree; so the expression of a thought discloses the cultivation of a man’s mind.[1] An essential sign of human maturity is the ability to dialogue. An attitude of openness towards others is shown by cordial dealings and a sincere desire to learn from each person.

“Coming to know other people, other cultures, always does us a lot of good; it makes us grow . . . Dialogue is very important for our own maturity, because in coming face to face with another person, other cultures, or even other religions in the right way, we grow; we develop and mature. There is of course a danger. If during a dialogue someone closes up and becomes angry, a quarrel could start. There is a danger of quarrelling, and this is not good, because we dialogue in order to learn, and not to quarrel. And what should our deepest attitude be so that we can dialogue and not quarrel? Meekness, the ability to meet people and other cultures peacefully, the capacity to ask intelligent questions: ‘Why do you think that way? Why does this culture do things this way?’ Listen to others and then speak. First listen, then talk.”[2]

Knowing how to listen

Sacred Scripture amply praises those who are ready to listen, while scorning the attitude of those who pay no heed to others. He whose ear heeds wholesome admonition will abide among the wise,[3] says the book of Proverbs. The Apostle James advises us to be quick to hear, slow to speak, slow to anger.[4] Sometimes the sacred writers even have recourse to a twist of irony: Telling a story to someone who does not listen is like rousing a sleeper from a deep slumber.[5]

A frequent problem in listening is that, while another person is speaking, we recall something related to what that person is saying, and we are eager to have “our say” as soon as a pause occurs. Then conversations ensue that perhaps are spirited, but with constant interruptions and where little real listening takes place.

Sometimes the problem is that conversation does not arise spontaneously, and we need to be clever in trying to bring it about. In such cases presumption needs to be avoided; that is, the tendency to constantly make a show of our own insights and knowledge. On the contrary, it is good to show that we are open and receptive, eager to learn from others, and thus to steadily widen our range of interests. Then we will listen attentively to topics that perhaps at first do not greatly attract us. This does not imply hypocrisy on our part, but rather the sincere effort to rise above our own point of view and to learn from others.

The ability to start up a conversation requires both daring and prudence, interest in others and discretion, risk and appropriate remarks. We can’t speak off the top of our head. We need to be ready to undo any hasty or inappropriate words we may have uttered unthinkingly, or amend a strong statement that we should have pondered more carefully. In any case, good conversations always leave a mark. The ideas and trains of thought expressed on both sides come to mind later on and result in new insights, along with an eagerness to continue that exchange.

It is surprising to see how some people seem to grow old prematurely in their interior attitudes; while others remain young at heart and open right to the end of their days. The fact is that we all carry within ourselves many untapped reserves. These include talents we have not yet taken advantage of and strengths we have never tested. So no matter how busy or tired we may be, we cannot allow ourselves to stop progressing, and need to learn from others and be receptive to new ideas.

Getting out of ourselves is good for us. We open ourselves to God and to others through him. Thus we overcome the self-centeredness that sometimes leads us to try to make reality accord with our own narrow interests or viewpoint. And we will be more on guard against personal shortcomings that can create distances between people, and that are a sign of immaturity. For example, expressing opinions with a dogmatic certainty that often doesn’t align with our true knowledge of things, or in a way that implies a veiled criticism of others. Other signs of immaturity are making use of “pre-fabricated” solutions or repetitive and trite pieces of advice; becoming irritated when someone doesn’t think the way we do, even though we claim to support variety and tolerance; being filled with jealousy when someone we know excels us; demanding from others a level of perfection that is beyond them, and that perhaps we ourselves cannot achieve; expecting people to be open and sincere, when we ourselves resist being corrected.

Maturity and correcting others

When we look upon others with affection, we will often notice how we can help them with friendly advice. We will tell them in confidence what others have perhaps seen but did not have the loyalty to tell them. For our correction and criticism to be useful and constructive, it has to stem from charity: “when you have to correct, you should do so with charity, at the opportune moment, without humiliating. And being ready yourself to learn and to improve in the very faults you are correcting.”[6]

The key to helping others change is in a certain sense linked to our own ability to change and improve in our own life. When we appreciate how hard it is for us to change and improve, and yet how important and liberating that effort is, we find it easier to see others objectively and help them effectively. Those who can speak the truth clearly to themselves will know how and when to do so with others, and will be open to listening to others who tell things clearly to them.

Being able to receive and accept criticism is proof of spiritual depth and wisdom. He who loves discipline loves knowledge, stupid is the man who hates correction.[7] Nevertheless, accepting what others tell us does not mean being influenced by every possible criticism of our professional or social affairs. If we “danced to every tune” that others raise about what we are or do, we would worry ourselves sick. At times people who are working for the good are much criticised, perhaps by those who themselves are doing very little, and who see their life and work as an indictment of their own;[8] or perhaps because they are seen as an “enemy” by those who act differently. And sometimes even those who carry out the same or similar deeds may criticise others out of jealousy.

The responsibility of giving good example

Maturity unites openness to others with fidelity to one’s chosen path in life and guiding principles, even when scarcely an echo of support comes from the surrounding environment. Certainly, any indifference we encounter could also be an indication that we ourselves need to change in some area, or to learn how to explain or present things better. But there are some core principles that we should never change, no matter what happens. Regardless of whether people listen to us or not, praise or insult us, thank or reject us, approve or disapprove: “and that contrast—because you’re confirming your faith with works—is exactly the naturalness I ask of you.”[10]

It is not unusual for a person to feel alone and unaided when undertaking great endeavours. The temptation then to give up can be very strong. Someone might even think that their example and witness is of little value. But this isn’t so; perhaps a match cannot light up a whole room, but everyone in the room can see the light. Perhaps many people feel incapable of following the example being given, but in their heart of hearts they would like to, and thus are stirred to aim for higher goals.

We can all recall how much the good example of so many people has helped us to improve. And yet most of these people probably don’t realize the effect they’ve had on our life. We have a big responsibility to try to exert a positive influence on others. “You must not destroy, through your neglect or bad example, the souls of your fellow men and women.”[11] We need to speak, give advice, exhort and encourage others. But above all we must back up our words with deeds, through the testimony of our own life. While it is impossible for us to always do so, we should aim at assisting everyone, and ask sincerely for forgiveness if we have failed in some way.

Openness to others is closely united to our progress in the lifelong battle to unmask the face of pride and grow in humility. Pride seeps into the most surprising nooks and crannies of our relationships with others. Were it to rear its ugly head openly, we would see how repulsive it is; so one of its most typical subterfuges is to conceal or mask its face. Pride often hides itself under another, seemingly positive trait, which it subtly contaminates. And when pride has set down deep roots, its simpler and more basic manifestations appear, signs of an immature personality: an unhealthy oversensitivity; constantly speaking about oneself; vanity and affectation in one’s gestures and way of speaking; an arrogant or conceited attitude, combined with deep discouragement upon perceiving one’s own weaknesses.

Sometimes pride can disguise itself as wisdom, with an intellectual pride shown in the need to always be rigorously right. At other times it hides behind a passionate zeal for justice and defence of the truth, under which lie the desire to “get back at” others, or an arrogant “orthodoxy” that seeks to dominate them. What one is really seeking is to control everything, to be the judge of everything. These are attitudes that, instead of serving the truth, make use of it—of its shadow—in order to feed the desire to stay on top of others.

Just as there is no such thing as perfect health, neither can we ever completely escape from the sophistries of pride. However, we can learn to detect it more readily so it does not gain more ground in our soul. At times, inevitably, we are fooled by pride, since it tends to entrench itself in us, and we become reluctant to let others help us see our defects. But even if we do not see pride’s face, hidden in so many ways, perhaps other can see it more clearly. If we are willing to listen to their fraternal warning, their constructive criticism, it will be much easier for us to unmask it. We need to be humble in order to accept the help of the others. And we also need to be humble if we are to help others without humiliating them in turn.

Maturity in the end can be summarised as the “‘healthy psychological prejudice’ of thinking usually about others.”[12] The personality God wants for us (to which we all aspire, albeit erringly at times) is that of someone who has “a heart that loves, a heart that suffers, a heart that rejoices with others.”[13]