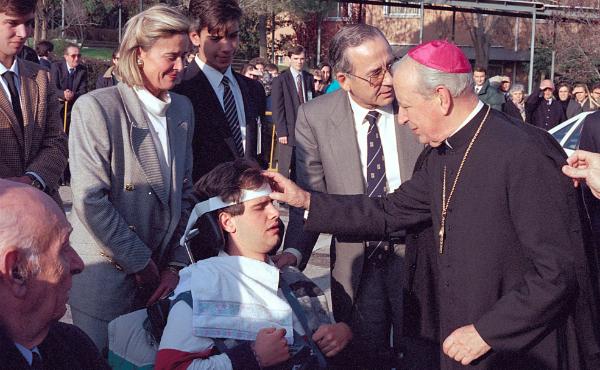 My daughter, my son: may it be said of you that the distinguishing feature of your life is “loving God’s will” (The Forge, no. 48). It is not a question of feeling like fulfilling God’s will, or enjoying doing so. We cannot be children, tossed to and fro (see Eph 4:14), letting our lives be dominated by our desires: one day I feel like doing this, and the next day I don’t. God is asking us to love his will steadily and strongly.

Our Father [Saint Josemaria] remarked that at certain times he received a succession of graces, one after another, which I didn’t know how to describe. I called them “operative” because they so dominated my will that I hardly needed to make an effort (Meditation, “The Steps Chosen by God,” February 14, 1964).

But this was not the usual thing in his life, and perhaps it won’t be in yours either. Most of the time he had to go “against the grain,” making an effort, struggling. Learn from his example and don’t get worried when you find it costs you effort to do what God asks, and you notice an inner resistance, the “old man” Saint Paul speaks about. Remember that the saints also experienced this, so take heart and respond generously.

Look at what our Father wrote at a time of trial and intense opposition: Temptations to rebel come—and I say “serviam.” To not fulfill God’s will—and I repeat again and again, “may it be done, be fulfilled….” To base, vile things—and as a remedy I think of the severe illness I know God will lovingly send me in his own good time (September 9, 1931, in Intimate Notes, no. 274).

Don’t you find these words of our Father consoling, now that you are learning what it means to struggle for Love? My daughter, my son, be faithful, and with God’s grace conquer the rebellion of pride and flesh, perhaps especially bothersome during longer periods of trial (Blessed Alvaro, Letter, June 1, 1991).