Letters from Saint Josemaria to Guadalupe

On a few occasions, the founder of Opus Dei personally wrote to Guadalupe Ortiz de Landázuri, showing his closeness and fatherly concern for her well-being. 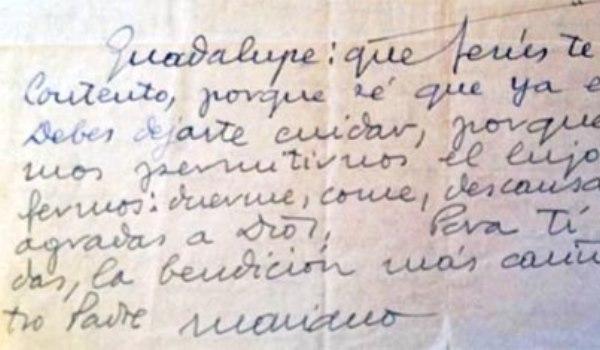 While we await the English translation of the book Letters to a Saint, which contains fragments from Guadalupe's letters to Saint Josemaria, here are some examples of how Saint Josemaria looked out for Guadalupe in different moments of her life.

In October 1952, Guadalupe fell seriously ill in Mexico after a poisonous insect bite. Saint Josemaría was concerned about Guadalupe's health, as she had moved to Mexico just two years before to begin the apostolic work of Opus Dei with women there. On November 17, 1952, Saint Josemaria wrote, "Guadalupe: may Jesus watch over you. I am happy because I know you are well now. You should let yourself be taken care of, because we can not afford the 'luxury' of being sick: so sleep, eat, rest, and in this way, you please God. For you and for all those there with you, a most affectionate blessing from your Father, Mariano*"

A week later, Guadalupe made reference to this letter from Saint Josemaria in a letter she sent to Rosario Orbegozo, who was living in Rome at the time and was working with the Founder: "I have not written for a long time, but now with this malaria, etc ... I don't know where the time has gone. I am perfectly fine now, although I'm still subject to "overfeeding" because the blood test has given the happy result of showing that that are still red blood cells missing. How about that? I don't feel anything, but I do everything they tell me. I received some letters from the Father who told me that we could not afford the luxury of being sick. How about you? I remember you a lot. " (Mexico, 26 November 1952) 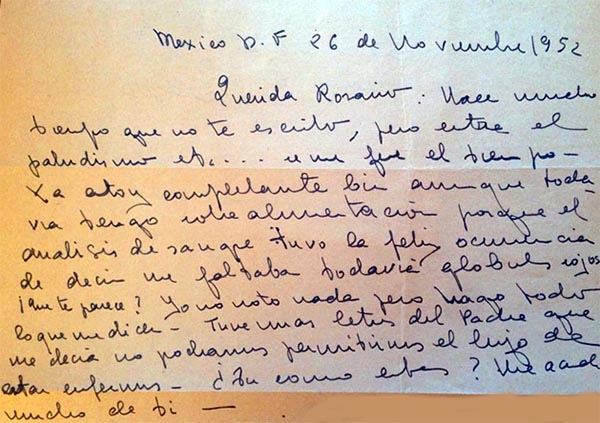 Saint Josemaría's attentiveness to people was very evident when someone was sick. Beginning in 1957, Guadalupe, who had resided in Rome since the previous year, began to suffer from a heart condition. Obdulia Rodriguez, a Mexican doctor who followed the evolution of Guadalupe-s disease, recalls the following that happened in January of 1958: "When I got to the elevator, I was greatly surprised to find the Father (Saint Josemaría ) and Don Alvaro (del Portillo) coming out of it at that very moment. 'Do you know what this is?' he asked. 'No, Father,' I answered. 'Well, it's a telegram from the Holy Father for Guadalupe!' Saint Josemaria was beaming." Obdulia goes on to tell how Saint Josemaria had wanted to deliver the telegram to Guadalupe himself. 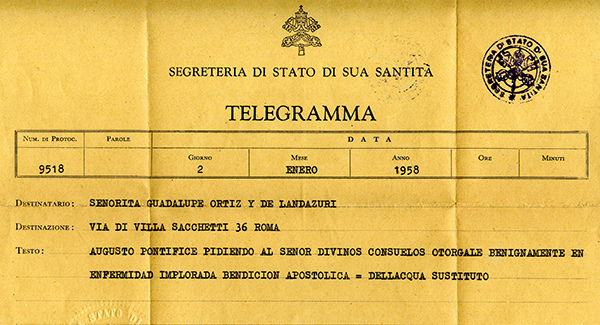 There are also several postcards from Saint Josemaría sent from different places, such as Fatima or Lourdes, addressed to Guadalupe and those living with her in Mexico. Saint Josemaría followed the beginnings of Opus Dei in each country very closely and also showed his affection for the people who had gone to start in different ways. For those who had gone to Mexico, the excitement of the first day in their new continent was made complete by a telegram from Saint Josemaria saying: "With all my affection, I remember my daughters."

*"Mariano" was the way Saint Josemaria often signed his letters to the members of Opus Dei, reminiscent of the early years of his ministry which coincided with the Spanish Civil War, during which he often employed this pseudonym for discretion.