Guadalupe: Love for God in Everything 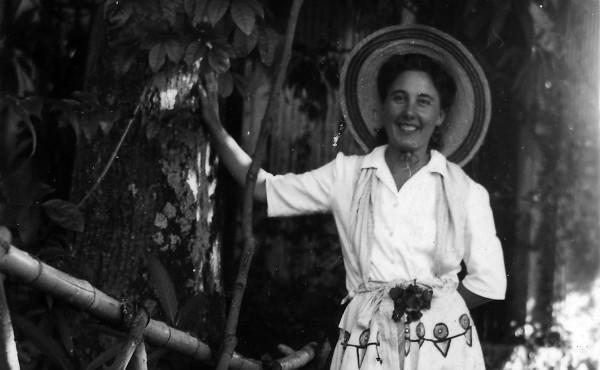 Guadalupe Ortiz de Landázuri was born in Madrid, Spain, on December 12, 1916. She was the fourth child and only daughter of Manuel Ortiz de Landázuri and Eulogia Fernández-Heredia. Her parents raised her in the Christian faith. When she was a child, her older brother Francisco passed away. When Guadalupe was 10 years old, she and the family moved to Tetouan, North Africa, because of the work of her father, who was in the military. During her childhood, two defining features of her personality already stood out: courage and boldness.

In 1932 the family returned to Madrid, where she graduated from high school at the Instituto Miguel de Cervantes. In 1933 she enrolled as a chemistry student at Universidad Central. She was one of only five women in a class of 70. Later, she began her doctorate, because she wanted to dedicate herself to university teaching. Her university colleagues remembered her as a serious student, but friendly, with a sense of adventure.

During the Spanish Civil War (1936-1939), her father was taken prisoner and condemned to be shot. Guadalupe, who was then 20 years old, joined her brother Eduardo and their mother, as they said their final goodbyes to her father hours before his death, helping him remain serene at that painful time. She sincerely forgave those who had decided to condemn her father. In 1937 she was able to move with her brother and mother to the other zone of Civil War Spain, where her brother Manolo also resided. They settled in Valladolid until the end of the war.

They returned to Madrid in 1939. Guadalupe began to teach in the school of the Blessed Virgin Mary and in the French Lyceum. One Sunday in 1944, while she attended Mass, she felt "touched" by the grace of God. Upon returning home, she met a friend and expressed a desire to speak with a priest. The friend provided Josemaría Escrivá's telephone number. On January 25 Guadalupe went to an appointment with Father Escrivá at a location which was the first women's center of Opus Dei, in Jorge Manrique Street. Guadalupe remembered that encounter as her discovery of the call of Jesus Christ to love him above all things through professional work and ordinary life. This was the message that God wanted to bring to men and women through Opus Dei. After considering the matter in prayer, and after spending a few days on a spiritual retreat, on March 19 Guadalupe decided to answer “yes” to the Lord. Guadalupe was 27 years old. From that moment on she intensified her dealings with God. She fulfilled with love her daily tasks, and sought to spend time before the tabernacle.

Opus Dei was in its early years and, among the tasks that had to be carried out, it was important to attend to the domestic administration of student residences that were being set up in Madrid and in Bilbao. Guadalupe dedicated herself to this work for a few years. They were years of scarcity and ration cards. In addition to these external difficulties, there was also the effort to learn a job for which she had no special ability. That did not diminish her passion for chemistry and, whenever she could, she continued to study it.

During the academic year 1947-1948 she was the director of the university residence Zurbarán. She made friends easily with the university students, who appreciated her patience and affection, as well as the sense of humor with which she helped them in their academic and personal lives.

On March 5, 1950, at the invitation of Saint Josemaría, she went to Mexico to take the message of Opus Dei to that country. She was very excited about the work that would be done in that country, under the protection of the Virgin of Guadalupe. She enrolled in a doctoral program in chemical sciences, which she had begun in Spain. With those who accompanied her, she set up a university residence. She encouraged the residents to take their studies seriously, and she raised their sights to the ideal of service to the Church and to the society of which they were a part. She emphasized concern for the poor and the elderly. Among other initiatives, she created a mobile clinic with a friend who was a doctor. They went house to house in the poorest neighborhoods, providing medical tests to the people who lived there and giving them free medicines. She promoted the cultural and professional formation of the peasants who lived in mountainous and isolated areas of the country and who often did not have the most basic education.

Guadalupe had a big heart and a strong character, which she tried to temper by making an effort to deal with others in a refined and considerate manner. Her Christian optimism and her habitual smile were very attractive, and she often expressed her joy in song, even though she was not particularly good at singing. Beatriz Gaytan, a historian, says that “whenever I think of her, despite the time that has elapsed, what I hear is her laugh. Guadalupe had a permanent smile. She was welcoming, affable, straightforward.” During the years she spent in Mexico she was one of the main people involved in setting up Montefalco, a former colonial hacienda which was then in ruins and which today has been converted into a conference center and retreat house, and the venue for two educational institutions: Montefalco School and the rural college El Peñón.

In 1956 she moved to Rome to work more closely with St Josemaría in the government of Opus Dei. That year she noticed the first symptoms of a heart condition and she needed to have an operation in Madrid. Despite a good recovery, her heart condition worsened and she returned to live in Spain for good. She took up again her academic work and started a research project on insulating refracting materials and the value of ash from rice husks for that use. She won the prize Juan de la Cierva for her research work and she completed and defended her doctoral thesis on July 8, 1965. At the same time she also worked as a Chemistry teacher at the Ramiro de Maeztu Institute for two years, and at the Women’s School for Industrial Studies (where she became the Deputy Head) for the following ten years. From 1968 she took part in the planning and setting up of the Center of Studies and Research of Domestic Sciences, in which she was the Deputy Head and Chemistry teacher. Those who worked with her remember that she was more understanding than demanding with people, and that one could see that she sought to be with God throughout the day. She knew herself looked upon lovingly by God and Our Lady, and whenever she could she would make a brief visit to the Blessed Sacrament, to talk with Jesus one to one. She often thought of her students when preparing her classes, which she tried to do as well as she could. She had many friends, and dedicated a lot of time and energy to them, without forgetting those who lived with her, whom she looked after with great affection.

Despite her heart condition, Guadalupe did not complain and tried not to concern herself with the tiredness from walking, climbing stairs, etc. She endeavored to listen with interest to others and wanted to pass unnoticed, seeking to focus the conversation on others. In 1975 doctors decided that the best option would be to operate, and Guadalupe left her home in Madrid to enter the Clínica Universidad de Navarra.The doctors operated on her on July 1. A few days earlier, on 26 June, the founder of Opus Dei had died in Rome. Guadalupe received the news with great pain but with the peace and joy of knowing that he was happy in the presence of God. A few days later Guadalupe would face her own death with that same serenity: although the result of the operation was satisfactory, when she was recovering, she suffered a sudden respiratory failure. She died on July 16, 1975, feast of Our Lady of Mount Carmel. On October 5, 2018, her mortal remains were moved from Pamplona to the Oratory of the Knight of Grace in Madrid.

Guadalupe's beatification took place on 18 May 2019 in Madrid, in a ceremony presided over by Cardinal Giovanni Angelo Becciu, prefect of the Congregation for the Causes of Saints. Blessed Guadalupe's feast day is celebrated on 18 May, anniversary of her First Holy Communion.