As we face a global health crisis, we may find ourselves feeling helpless or at a loss about the best ways to respond or react. What difference can one person really make to improve such a complex situation? The example of Joanna from Singapore shows that knowledge of one’s personal circumstances, a network of good friends, and a bit of initiative can go a long way. 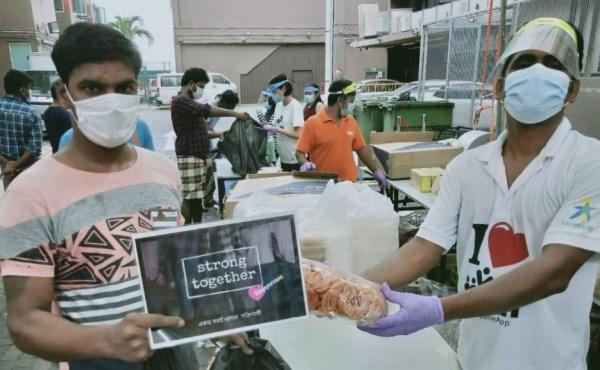 Singapore is home to about 350,000 foreign workers, mainly from India and Bangladesh. Most of them live in dormitories scattered throughout the city-state, but their living quarters are communal, and once the Covid-19 infection started spreading among them, it was difficult to contain. Those who were healthy were quarantined in their dormitories, while mobile medical units were set up on site so that doctors could test every worker. Those who tested positive were sent to hospitals and communal medical facilities. The dormitories were in lockdown for most of April and will be until the end of May, like the rest of the country.

None of this was on Joanna’s mind when she and a group of friends were doing a time of prayer and reflection before a live transmission of the Blessed Sacrament. But Joanna’s prayer was simple: “Lord, what else do you want me to do? I can be your hands, your eyes, your feet…” Although no specific light came at that moment, the answer came the next day, in a conversation with her husband, a doctor at a public hospital.

One Thing Leads to the Next

As it turned out, the hospital where Joanna’s husband works was charged with providing mobile medical attention to four foreign worker dormitories in quarantine, meaning over 27,000 men would have to be triaged and screened for the virus. Joanna asked what else these workers might need aside from medical care, basic provisions and enhanced Wi-Fi access. The reply was simple: snacks! Or at least something that would get them through the long haul. (They were already being provided with 3 meals a day)

Snacks? This is something a mother of six is well-versed in providing, but for so many people? And not just to provide a quick bite and a sip to drink, but something more substantial? Perhaps with some donation from friends, it would be doable for just one of the dormitories, housing 6000 workers…

Rousing friends and neighbours to donate to the cause turned out to be easier than Joanna thought. Many were keen to help in some way. Just as she was wondering how to go about collecting the donations, Lynette, a friend and organizer of large projects such as medical missions to Cambodia, surfaced out of the blue with warm greetings, and added, “If you need any help with anything, just let me know.” Joanna was sure that God’s hand was behind this, for as soon as Lynnette came on board, she roped in many others who easily drove the private fundraising, even providing pro bono professional accounting. Within a week, they had raised $40,000. Suddenly the project had taken flight: they could now send snacks to every single resident of the four dormitories.

The plan was for each worker to receive 3 items: a 90 gram pack of biscuits and a good share of murukku (Indian) snacks and dates. Most of the workers were Muslim, and the traditional way to break the Ramadan fast is with dates. Sourcing these food items brought other “angels” to the fore: friends of friends connected Joanna with wholesale biscuits suppliers, including the boss of Julie Biscuits. Eventually, Haniffa Pte Ltd topped off the deal when they offered less than half the wholesale price for murukku and dates to aid the venture. 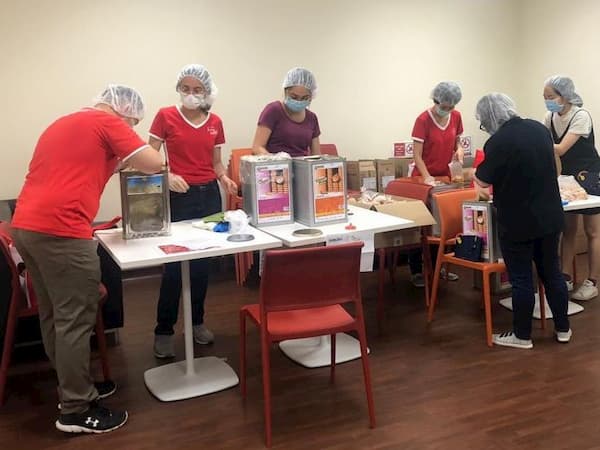 As often happens with such endeavors, challenges arose. Of course, no one could just walk into the dormitories, now quarantined under stringent supervision. Nevertheless, the food orders could not be finalised without the express permission to deliver. With lots of prayer, the green light finally arrived at 10 pm one night after a flurry of emails and phone calls. Although they could finally access the dormitories, they would only have a total of five hours to deliver all the snacks –pre-packaged for individual distribution– en bloc. Thankfully, the police commander in charge coordinated the final distribution to each worker with the help of officers from the Police Force and dormitory volunteers.

But the challenges were not over. Looking at the original packaging from their suppliers, Joanna realized they would have to do some of their own re-packaging. Calculating the time needed for loading, travelling and unloading, she saw they would need to hire the trucks needed to make the delivery in 3 hours; not all the suppliers had enough trucks to deliver simultaneously to all 4 dormitories in that 3-hour period. At this point, volunteers from Ng Teng Fong Hospital (Community Outreach and Information Technology Departments) stepped forward to undertake the massive job of creating 27,000 individual packs of biscuits within the loading bay of their hospital. After 3 days of repacking biscuits for distribution, they were now ready for the final delivery to the dormitories.

When the day finally came, four 14-foot trucks pulled up at the hospital, and all available hands helped to load up as quickly as they could. Joanna and her husband also brought along their 19-year-old son Gabriel for more muscle power. With military precision, their truck and the direct deliveries from Haniffa arrived on time, and completed their unloading in 3 hours. The food items were neatly stacked up and ready for individual distribution that weekend. On the final evening, Joanna and her husband completed the final delivery to the last dormitory between 8 and 10 pm. By the end, 2.5 tons of biscuits, 4.3 tons of murukku, and a ton of preserved dates were distributed to more than 27,000 foreign workers. They had made the deadline! 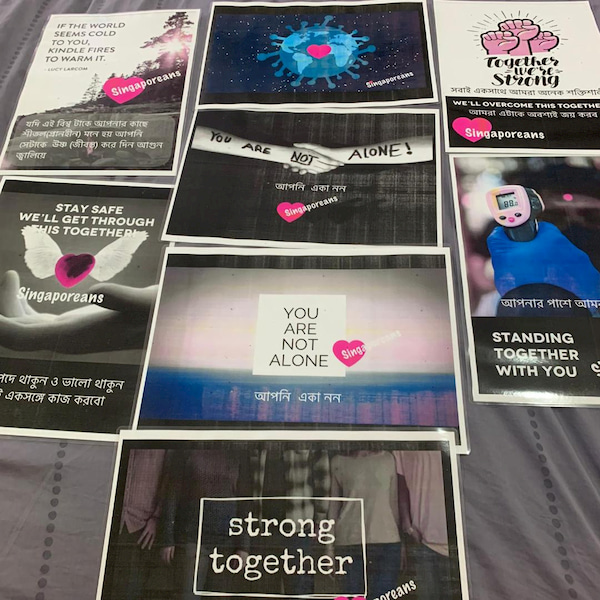 “We’ll overcome this together! Love from Singaporeans”

The distribution to each individual worker was a special moment indeed. The coordinator from the Ministry of Manpower, Miss Wei Shi, kindly sent some pictures as the work went along, and there were certainly some happy faces. Each dormitory received four posters designed by a friend, stating simply in English and Bengali: “We’ll overcome this together! Love from Singaporeans.”

The generosity of the donors left a surplus of several thousand dollars. The operators at the dormitories asked if they would be willing to direct this amount towards the purchase of some standing fans and kettles for boiling water that would be especially useful for the workers. And so the adventure continued…

When asked if she would have done all this having known in advance all the hassle it would involve, Joanna has no doubts: “Of course! My ‘suffering’ was small compared to the fear and anxiety these workers must have felt in these uncertain times.” But she was more convinced that it was God himself who wanted it, as He opened one door after another. It was a gesture toward the workers so they might know that they were not alone in their isolation, that the people of the country they had come to work in were not indifferent to their fears and concerns.