Given below is a summary of Benedict XVI's first Encyclical, entitled "Deus caritas est" (God is love). Dated December 25, Solemnity of the Nativity of the Lord, it considers the question of Christian love.

The Encyclical is divided into two long parts. The first, entitled, "The Unity of Love in Creation and in Salvation History," presents a theological- philosophical reflection on "love" in its various dimensions - "eros," "philia," and "agape" - highlighting certain vital aspects of God's love for man and the inherent links that such love has with human love. The second part, entitled "The Practice of Love by the Church as a 'Community of Love'," concerns the concrete implementation of the commandment to love others.

The term "love" - one of the most used, and abused, words in today's world - has a vast field of meaning. In this multiplicity of meanings, however, the archetype of love par excellence that emerges is that between man and woman, which in ancient Greece was given the name of "eros." In the Bible, and above all in the New Testament, the concept of "love" is rendered more profound, a development expressed by the rejection of the word "eros" in favor of the term "agape" to express oblate love.

This new view of love, an essential novelty of Christianity, has not infrequently been considered in a completely negative sense as the refusal of "eros" and of all things corporeal. Although there have been tendencies of this nature, the meaning of this development is quite different. "Eros," placed in the nature of man by his Creator, needs discipline, purification and maturity in order not to lose its original dignity, and not be degraded to the level of being pure "sex," becoming a mere commodity.

The Christian faith has always considered man as a being in whom spirit and matter are mutually intertwined, drawing from this a new nobility. The challenge of "eros" may be said to have been overcome when man's body and soul are in perfect harmony. Then love truly becomes "ecstasy," but not ecstasy in the sense of a passing moment of euphoria, but as a permanent departure from the "I" closed within itself towards freedom in the giving of self and, precisely in this way, towards the rediscovery of self, or rather, towards the discovery of God. In this way, "eros" can raise the human being "in ecstasy" towards the Divine.

Ultimately what is necessary is that "eros" and "agape" never be completely separated from one another; indeed, the greater the extent to which the two - though in different dimensions - find their right equilibrium, the more the true nature of love is realized. Although initially "eros" is, above all, desire, in approaching the other person it will ask ever fewer questions about itself and seek ever more happiness in the other, it will give itself and desire to "be there" for the other. Thus the one becomes part of the other and the moment of "agape" is achieved.

In Jesus Christ, Who is the incarnate love of God, "eros-agape" achieves its most radical form. In His death on the cross, Jesus, giving Himself to raise and save mankind, expressed love in its most sublime form. Jesus ensured a lasting presence for this act of giving through the institution of the Eucharist, in which, under the species of bread and wine, He gives Himself as a new manna uniting us to Him. By participating in the Eucharist, we too become involved in the dynamics of His act of giving. We unite ourselves to Him, and at the same time unite ourselves with everyone else to whom He gives Himself. Thus we all become "a single body." In this way, love for God and love for others are truly fused together. The dual commandment, thanks to this encounter with the "agape" of God, is no longer just a requirement: love can be "commanded," because first it was given. 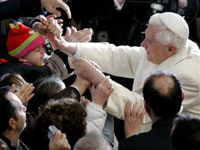 Love for others rooted in the love of God, in addition to being the duty of each individual faithful, is also the duty of the entire ecclesial community, which in its charitable activities must reflect Trinitarian love. An awareness of this duty has been of fundamental importance in the Church ever since her beginnings; and very soon the need became clear for a certain degree of organization as a basis for a more effective realization of those activities.

Thus, within the fundamental structure of the Church, the "deaconry" emerged as a service of love towards others, a love exercised collectively and in an ordered fashion: a concrete service, but at the same time a spiritual one. With the progressive growth of the Church, the practice of charity was confirmed as being one of her essential aspects. The Church's intimate nature is thus expressed in a triple duty: announcing the Word of God ("kerygma- martyria"), celebrating the Sacraments ("leiturgia"), and the service of charity ("diakonia"). These duties are inherent to one another and cannot be separated.

Beginning in the nineteenth century, a fundamental objection was raised against the Church's charitable activity. Such activity, it was said, runs counter to justice and ends up by preserving the status quo. By carrying out individual acts of charity, the reasoning went, the Church favors the preservation of the existing unjust system, making it in some way bearable and thus hindering rebellion and potential transformation to a better world.

In this way, Marxism sought to indicate in world revolution, and in the preparations for such revolution, a panacea for social ills; a dream that has since been shattered. Pontifical Magisterium - beginning with Leo XIII's Encyclical "Rerum novarum" (1891), and later with John Paul II's three social Encyclicals: "Laborem exercens" (1981), "Sollicitudo rei socialis" (1987), and "Centesimus annus" (1991) - has considered the social question with growing attention and, in facing ever new problems, has developed a highly complex social doctrine, proposing guidelines that are valid well beyond the confines of the Church.

The creation of a just order in society and the State is the primary duty of politics, and therefore cannot be the immediate task of the Church. Catholic social doctrine does not want to give the Church power over the State, but simply to purify and illuminate reason, offering its own contribution to the formation of consciences so that the true requirements of justice may be perceived, recognized and put into effect. Nonetheless, there is no State legislation, however just it may be, that can make the service of love superfluous. The State that wishes to provide for everything becomes a bureaucratic machine, incapable of ensuring that essential contribution of which suffering man - all mankind - has need: loving personal dedication. Whoever wants to dispose of love, seeks to dispose of man.

In our own time, one positive collateral effect of globalization appears in the fact that concern for others, overcoming the confines of national communities, tends to broaden the horizons of the whole world. Structures of State and humanitarian associations both support, in various ways, the solidarity expressed by civil society; thus, many charitable and philanthropic organizations have come into being. In the Catholic Church too, as in other ecclesial communities, new forms of charitable activity have arisen. It is to be hoped that fruitful collaboration may be established between these various elements. Of course, it is important that the Church's charitable work does not lose its own identity, lost against the background of widespread organized charity of which it is simply another alternative. Rather it must maintain all the splendor of the essence of Christian and ecclesial charity. Therefore:

Christian charitable activity, apart from its professional competence, must be based on the experience of a personal encounter with Christ, Whose love touched believers' hearts, generating within them love for others.

Christian charitable activity must be independent of parties and ideologies. The program of Christians - the program of the Good Samaritan, the program of Jesus - is a "heart that sees." This heart sees where there is need of love and acts accordingly.

Christian charitable activity, furthermore, must not be a function of that which today is called proselytism. Love is gratuitous, it is not exercised in order to achieve other goals. However, this does not mean that charitable activity must, so to say, leave God and Christ on one side. Christians know when the time is right to speak of God, and when it is right to be silent and let love alone speak. St. Paul's hymn of charity must be the "Magna Charta" for the entire ecclesial service, protecting it from the risk of degrading into mere activism.

In this context, and faced with the impending secularism that also risks conditioning many Christians committed to charitable work, we must reaffirm the importance of prayer. Living contact with Christ ensures that the immensity of need coupled with the limits of individual activity do not, on the one hand, push charity workers into ideologies that seek to do now that which God, apparently, does not manage to do or, on the other, serve as a temptation to surrender to inertia and resignation. Those who pray do not waste their time, although a situation may seem to call only for action, nor do they seek to change and correct God's plan. Rather they aim - following the example of Mary and the saints - to draw from God the light and the strength of love that defeats all the darkness and selfishness present in the world.

To read the full text of the Encyclical, follow the link on the side panel.

Full text of the encyclical