Feast of the Exaltation of the Holy Cross

September 14 is the feast of the Exaltation of the Holy Cross. A brief history of how this feast came to be celebrated in the Church. 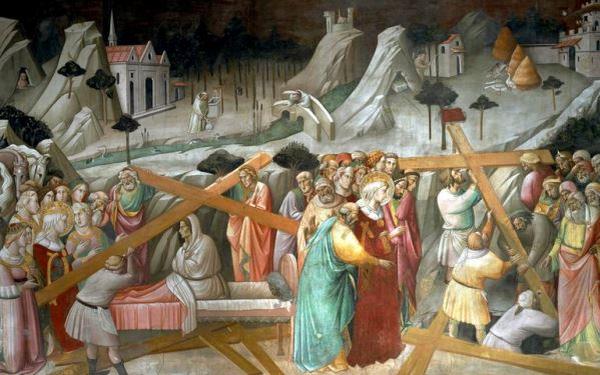 The feast of the Exaltation of the Holy Cross originated in the Church in Jerusalem. From the middle of the fourth century it was celebrated on 13 September, the anniversary of the dedication of the basilica erected on Golgotha under Constantine. According to the account written by a fourth-century pilgrim named Egeria, a relic of our Lord’s Cross had been found on that date a few years earlier. The “exaltation” or “raising up” of the Cross took place on the second day of the octave of the dedication; on that day, according to a liturgical book of the time, the venerable Cross is solemnly shown to all the Christian people. At the present time the most characteristic rite of this feast in the Byzantine liturgy is the priest raising the Cross above all the people’s heads, blessing them and turning to the four points of the compass, while the choir intones the Kyrie Eleison a hundred times at each point. Afterwards the faithful come forward to venerate the Cross and to receive one of the flowers decorating the place where the Cross has lain. In the Eastern Churches this feast is so important that it is considered an Autumn Easter.

In Rome, from the beginning of the sixth century, 3 May was commemorated in the Vatican Basilica as a parallel feast, the Finding of the Holy Cross. In the middle of the seventh century the Vatican Basilica adopted the Jerusalem custom of venerating a fragment of the relic of the Cross (called the lignum crucis) on 14 September. Pope Sergius (687-701) transferred the custom to the Lateran Basilica, giving it extra solemnity, such that by the eighth century the feast had spread all over the Christian West.

In the Roman liturgy the preface of the Mass reminds us that since the tree of Paradise was the place of mankind’s fall, God has wanted the Cross to be the new tree that would save us: “ut unde mors oriebatur, inde vita resurgeret, so that where death arose, life might again spring forth.”[1] The readings emphasize the lifting up of Christ on the wood of the Cross as an anticipation of his being raised into glory, and as the “magnet” that would draw all creatures: and I, when I am lifted up from the earth, will draw all men to myself.[2] The Cross is the place of Jesus’ triumph, and from it, he wants us to help spread his reign. “Christ our Lord was crucified; from the height of the Cross he redeemed the world, thereby restoring peace between God and men. Jesus reminds all of us, ‘And I, if I be lifted up from the earth, will draw all things to myself’ (Jn 12:32). If you put me at the center of all earthly activities, he is saying, by fulfilling the duty of each moment in what appears important and what appears unimportant, I will draw everything to myself. My kingdom among you will be a reality!”[3]

Saint Josemaria always wore a reliquary round his neck in the form of a cross containing a lignum crucis, a fragment of the True Cross. It was a manifestation of his devotion to the Holy Cross in the loving fulfilment of everyday duties. There are hundreds of ways, also small ones, to express this devotion in daily life, such as making the sign of the cross when saying grace before and after meals: “That moment of blessing, however brief, reminds us of our dependence on God for life; it strengthens our feeling of gratitude for the gifts of creation; it acknowledges those who by their labours provide us with these goods; and it reaffirms our solidarity with those in greatest need.”[4]